MASUKA Vs Communal Violence Bill: Which Is The Bigger Disaster? 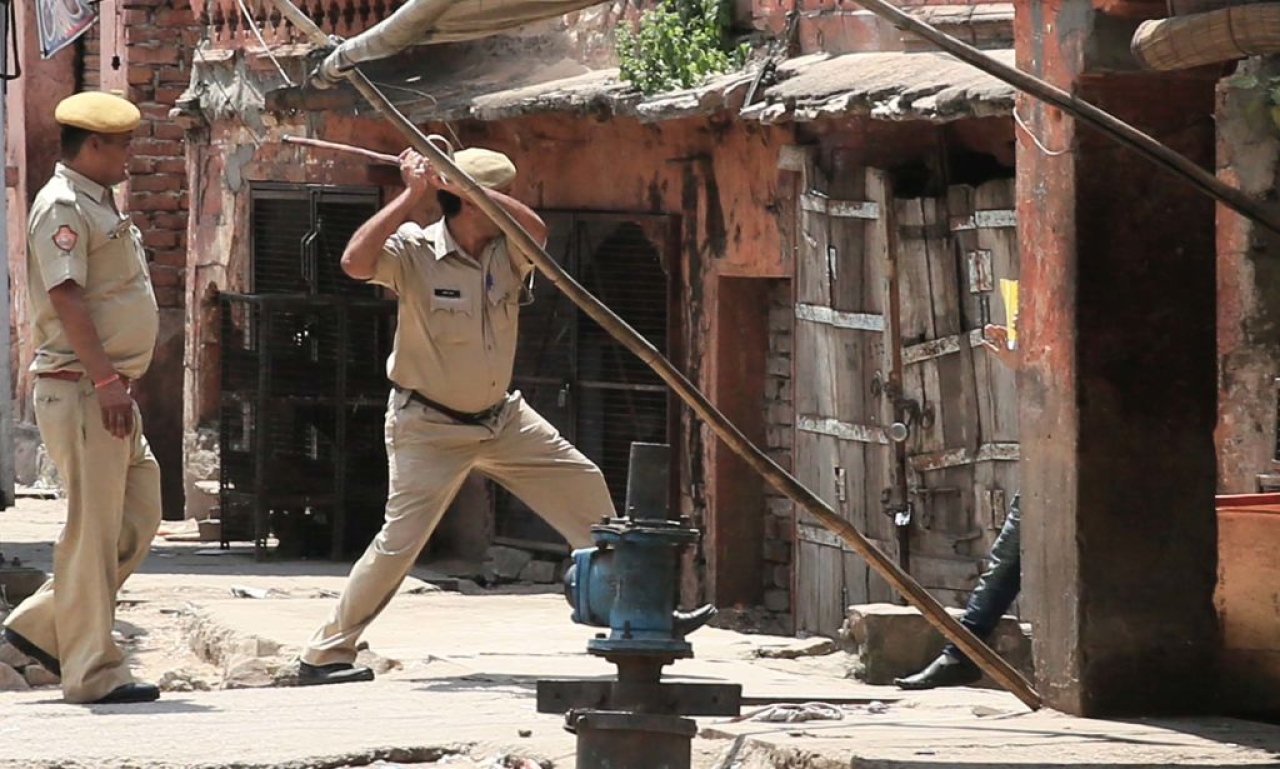 A curfew scene in Jaipur in 2017. (Himanshu Vyas/Hindustan Times via Getty Images)

The Parliament was informed a few weeks ago that communal violence in India recorded a marginal rise in 2017: 111 people were killed and 2,384 injured in 822 communal incidents in the country. The continued instances of communal violence are a blot on society and state, and expose the limitations in the law and order mechanism, especially in rural areas.

Suggestions to amend this situation have been aplenty. In July 2017, the ‘National Campaign against Mob Lynching’ unveiled the "MAnav SUraksha KAnoon" or "MASUKA", a badly drafted proposed statute. The bill proposed harsher penalties for ‘mob lynching’ and a variety of other offences. The definitions given in the draft legislation are problematic and open ended, with the overlap of already existing provisions in the Indian Penal Code, 1860 (IPC). The legislation is, thus, redundant on that single ground. An article in a popular left-wing portal recently suggested the enactment of the Communal Violence Bill, 2011 (Prevention of Communal and Targeted Violence (Access to Justice and Reparations) Bill, 2011) as a ‘ cure’ for communal violence in the country. The Bill was proposed by the National Advisory Council (NAC) but the Rajya Sabha failed to pass it in 2011, citing the egregious violation of federalism.

While examining the provisions of MASUKA, some similarities to the Communal Violence Bill can be observed. Both bills represent a certain form of thinking prevalent among members of the left-liberal intelligentsia.

The Communal Violence Bill and MASUKA are both flawed proposals, riddled with ambiguous definitions coupled with impractical requirements that jeopardise the federal structure of the Constitution.

A spate of articles appeared in June and July last year in opinion and editorial pages in the mainstream English media, attempting to create a narrative on ‘increasing’ mob killings and vigilante attacks. One of them was by a legal scholar and constitutional expert. He proposed that the Communal Violence Bill (CVB) be enacted to combat the "rise of lynchings" in the country. He argued that the CVB is more extensive and far reaching compared to MASUKA, both in the scope and scale of definitions, in the creation of institutions and institutional mechanisms to improve law and order. He was not wrong, the bill is very expansive, and its enactment would have more (undesirable) consequences than the MASUKA bill. The author went on to argue that the definitional clause of "communal and targeted violence" in CVB is superior to the definition of "mob" in the MASUKA Bill.

‘Communal and targeted violence’ means and includes any act or series of acts, whether spontaneous or planned, resulting in injury or harm to the person and or property, knowingly directed against any person by virtue of his or her membership of any group, which destroys the secular fabric of the nation.

While the MASUKA bill in section 2 clause (a) defines lynching as:

A group of two or more individuals, assembled with an intention of lynching.

The CVB definition is more expansive and open ended. More importantly, the CVB is openly sectarian and divisive. Why? Because the acts of violence that come under the ambit of the act can only occur against linguistic or religious minorities or Scheduled Tribes and Scheduled Castes. The MASUKA bill has no such provisions.

The legal scholar went on to say in his article:

The targeted violence bill also adequately defines as punishable hate propaganda, atrocity, sexual assault, torture and creation/reinforcement of a hostile environment. The bill casts several duties on police and others, violation of which is a serious offence.

“Hostile environment against a group” means an intimidating or coercive environment that is created when a person belonging to any group as defined under this Act, by virtue of his or her membership of that group, is subjected to any of the following acts:

(i) Boycott of the trade or businesses of such person or making it otherwise difficult for him or her to earn a living; or,

(ii) Publicly humiliate such person through exclusion from public services, including education, health and transportation or any act of indignity; or,

(iii) Deprive or threaten to deprive such person of his or her fundamental rights; or,

(iv) Force such person to leave his or her home or place of ordinary residence or livelihood without his or her express consent; or,

(v) Any other act, whether or not it amounts to an offence under this Act, that has the purpose or effect of creating an intimidating, hostile or offensive environment.”

This provision is clearly troublesome. It attempts to prosecute persons for perceived incongruous conduct. Even the slightest indifference or apathy to a person who belongs to a minority or SC/ST community can become a criminal offence in the eyes of the law.

The CVB and MASUKA share the provision to prosecute persons for “hate propaganda” and “offensive material” respectively, and they show conceptual similarity.

Notwithstanding anything contained in any other law for the time being in force, whoever publishes, communicates or disseminates by words, either spoken or written, or by signs or by visible representation or otherwise acts inciting hatred causing clear and present danger of violence against a group or persons belonging to that group, in general or specifically, or disseminates or broadcasts any information, or publishes or displays any advertisement or notice, that could reasonably be construed to demonstrate an intention to promote or incite hatred or expose or is likely to expose the group or persons belonging to that group to such hatred, is said to be guilty of hate propaganda.

“Offensive material” shall mean any material that can be reasonably construed to have been made to incite a mob to lynch a person and shall include material promoting lynching on the grounds of religion, race, culture or any other ground.

In both cases, one can see how any news report damning one group can be “reasonably” construed to be hate propaganda or offensive material. The police are given a further tool to harass the citizenry with allegations of transmitting, possessing or publishing “hate propaganda” or “offensive material” under the respective acts.

The bill will radically alter the manner in which we treat many offences, creating a hierarchy on the basis of the motive of a crime. Forgetting this factor, the relationship between stricter penalties and deterrence is sketchy at best. A hate crime legislation will not deter an offender any more than before.

The malfeasance of the CVB bill does not end there. It creates the improperly named “National Authority of Communal Harmony, Justice and Reparation” (NACHJAR) which is given wide powers. The members of NACHJAR are further protected from scrutiny in the public eye, and are to function with near zero accountability.

The hope at this point would be that the most draconian of the bill’s provisions are over, but that is sadly not the case. There are two more provisions that illustrate the amount of depravity in this statute: Sections 20 and 74. Section 20 allows the declaration of emergency under Article 355 on the ground of “internal disturbance” (the same ground that Indira Gandhi famously used) in the wake of organised communal violence. The consequences of such a provision should not be lost on us. The statute is expanding the scope of emergency state powers to an undesirable extent.

Meanwhile, Section 74 perverts the safeguards that the accused is assured in a criminal justice system. The burden of proof shifts to the accused if it is shown that he shared any “hate propaganda”, which could be anything from a news report to a video, or if a “hostile environment” exists, then it is presumed that an act of violence occurred because of the victim’s membership in the affected community.

The CVB is an epitome of sectarian legislations that the United Progressive Alliance government championed: the definitions of the crimes are broad and it opens up the possibility of severe penalties for even the slightest indiscretions. It has clearly been proposed as a mechanism for the central government to override the state government’s law and order duties.

The MASUKA bill was proposed by “civil society” activists in response to the “rising tide of lynch mobs” aimed against minority communities. The idea behind both legislations is fundamentally the same, that is, to increase the punishment and institutional capacity to prosecute people based on perceived misconduct against “minority” groups. Both of these legislations attempt to solve a problem in a quintessentially flawed manner. They have wrongly diagnosed the law and order issue to be flowing from the lack of institutional sanction to prosecute, throwing aside the fact that such mechanisms already exist. The problem is rather multi-faceted. There is a lack of police personnel, political involvement in policing, a broken legal system and more that cause the problem. But to resolve these issues, significant institutional reform and political capital have to be expended, which may not be in the best interest of the party in power. These legislations are a simple mechanism for a “secular” government to “solve” the issue of communal violence.

Both legislations are case studies on dismally drafted criminal law statutes. Both legislations attempt to pervert the basic principles of criminal law, with clear political intentions. The only difference between the two draft legislations is the perversity of it. MASUKA is clearly a less blatantly perverse draft statute, one that is clearly inspired by the CVB. It is a “secular” redux of the CVB. Secular because persons, regardless of their community affiliation, could be prosecuted for offences under the legislation. Gun to my head, I would choose MASUKA over the Communal Violence Bill. But ideally, neither legislation should be reckoned as a solution to the country’s law and order problems. What we require is not more laws, but better enforcement of those already in the books.

The author would like to thank Shilpa Prasad and Mandar Kagade for their inputs.

Ananth Krishna is a student of law, LLB (Hons) at the NUALS, Kochi, Kerala.

Get Swarajya in your inbox everyday. Subscribe here.
Tags:
121 Shares