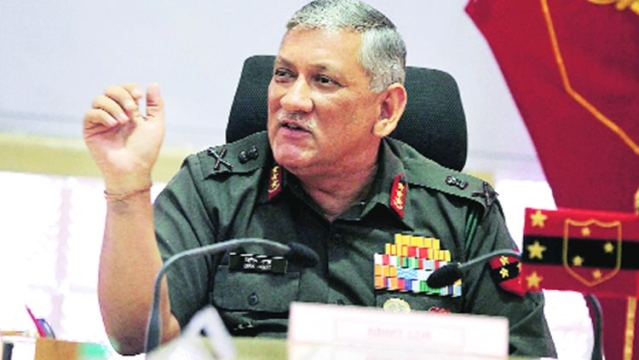 The 15 February warning to stone-pelters in Kashmir that those who would attack security forces during anti-insurgency operations would be considered terrorists and dealt with accordingly, has not gone down too well with both the separatists and the so-called mainstream political parties.

On the other hand, Army Chief Bipin Rawat’s warning got fullest support from the Union Home Ministry and the Director General of Police (DGP), Jammu and Kashmir (J&K). Minister of State for Home Kiren Rijiju defended the Army Chief and said there should be action against stone-pelters as “national interest is supreme”. The J&K DGP warned that stone-pelters would be “destroyed if they refused to stay away from the encounter sites. It happened for the first time after years that the Army Chief, the Union Home Ministry and the J&K DGP spoke in one voice and it was quite understandable as the provocation was very, very grave.

The stern message from the Army Chief came a day after three soldiers faced heavy stone-pelting at Parray Mohalla of Bandipora, Kashmir, when they were about to launch an operation against militants holed up there. The worst part was not that the Over Ground Workers (OGWs) in their hundreds restored to heavy stone-pelting to foil the anti-insurgency operation but the manner in which they prevented the “army rescue team” to evacuate the injured soldiers so that they could be taken to hospital for treatment. These soldiers died because they couldn’t get timely medical treatment. The provocation was grave and, hence, the resultant warning, coupled with two appeals to people to stay away from encounter sites to avoid collateral damage.

It was expected that separatists of all hues, including Syed Ali Shah Geelani, Mirwaiz Omar Farooq and Yasin Malik would at once side with the seditious crowds and stone-pelters and denounce the Army Chief and it did happen instantly. They in one voice termed the Army Chief’s statement as “apparent threat to carry out a spree of civilian killings” and declared that no action on the part of the Army would deter the Kashmiri freedom fighters. They ignored the appeal part of the Army Chief’s statement and sought to arouse anti-India passions by misinterpreting the otherwise sane advice to the people that it would be in their interest if they cooperated with security forces fighting the menace of secessionism.

What was shocking was the open support the separatists and stone-pelters got from the main opposition National Conference (NC), the Congress, and even the ruling Peoples Democratic Party (PDP). The NC described the Army Chief’s warning as “belligerent remarks” and said: “Youth rushing towards encounter sites and incidents of stone-pelting on the forces are worrying and alarming signs of the sense of alienation and disenchantment in Kashmir”.

“The need of the hour is to understand and acknowledge the deep sense of isolation in Kashmir and deal with it with statesmanship and magnanimity. Threatening and warning youth who are already anguished and irrational to the sense of caring little for their lives will be of little consequence but would only push them further from reconciliation. Aggressive, hot-headed statements would bring spurt in local militancy in Kashmir and make the challenge of engaging with the youth insurmountable,” the NC further said.

The Congress viewpoint was explained by none other than leader of Opposition in the Rajya Sabha and former J&K chief minister Ghulam Nabi Azad. He described the stone-pelters as “children” and questioned the decision of the Army Chief to go tough against the Kashmiri youth protesting against encounters.

“Last year, more than 100 youths lost their lives, while around 200 children lost eyes in the Army action. Besides, 12,000 were put in jails. Will the Centre want to repeat the same? The situation in Kashmir is very grave and any provocation can again make the condition worse,” Azad said.

More significantly, the PDP, which is ruling the state in alliance with the Bharatiya Janata Party (BJP), also didn’t lag behind. It asked the Army to exercise restraint. “This has not happened today, there have been occasions in the past also. That is why we say in any circumstances, a disciplined force observes restraint. This is a welfare state and we are committed to certain principles,” PDP general secretary and vice-chairman of Horticulture Development Board Nizamuddin Bhat said.

The situation in Kashmir is highly grave and the need of the hour was to appreciate the circumstances under which the Army Chief made the statement on the menace of stone-pelters in Kashmir, but it was not to be. By taking a stand, which is not consistent with the stand taken by the Army, the Union Home Ministry and the J&K DGP, the “mainstream Kashmiri leaders have only added fuel to the fire and further aggravated the situation. They have only accorded a dangerous legitimacy to stone-pelters and politics of secessionism, based on fanaticism. They didn’t realise the grave implications of what they said. Nor did they appreciate the fact that the Army and paramilitary forces had been operating in a very hostile environment since years now. They all sided with unruly elements. Indeed, it has become difficult to distinguish between separatists and mainstream leaders in Kashmir.

One can only hope and pray that good sense would finally prevail and the people of Kashmir would stay away from the encounter sites so that the Army and paramilitary forces could conduct anti-insurgency operation in an effective manner and restore peace and normality in the terrorist and separatist-infested Kashmir. Kashmir is not an ordinary part of India; it is strategically most crucial for the national security. If Kashmir falls, India would also fall and this is the fact which all friends and well-wishers of India must appreciate.