#MGRAt100: That Tamil Nadu Is Part Of India’s Mainstream Is His Biggest Achievement 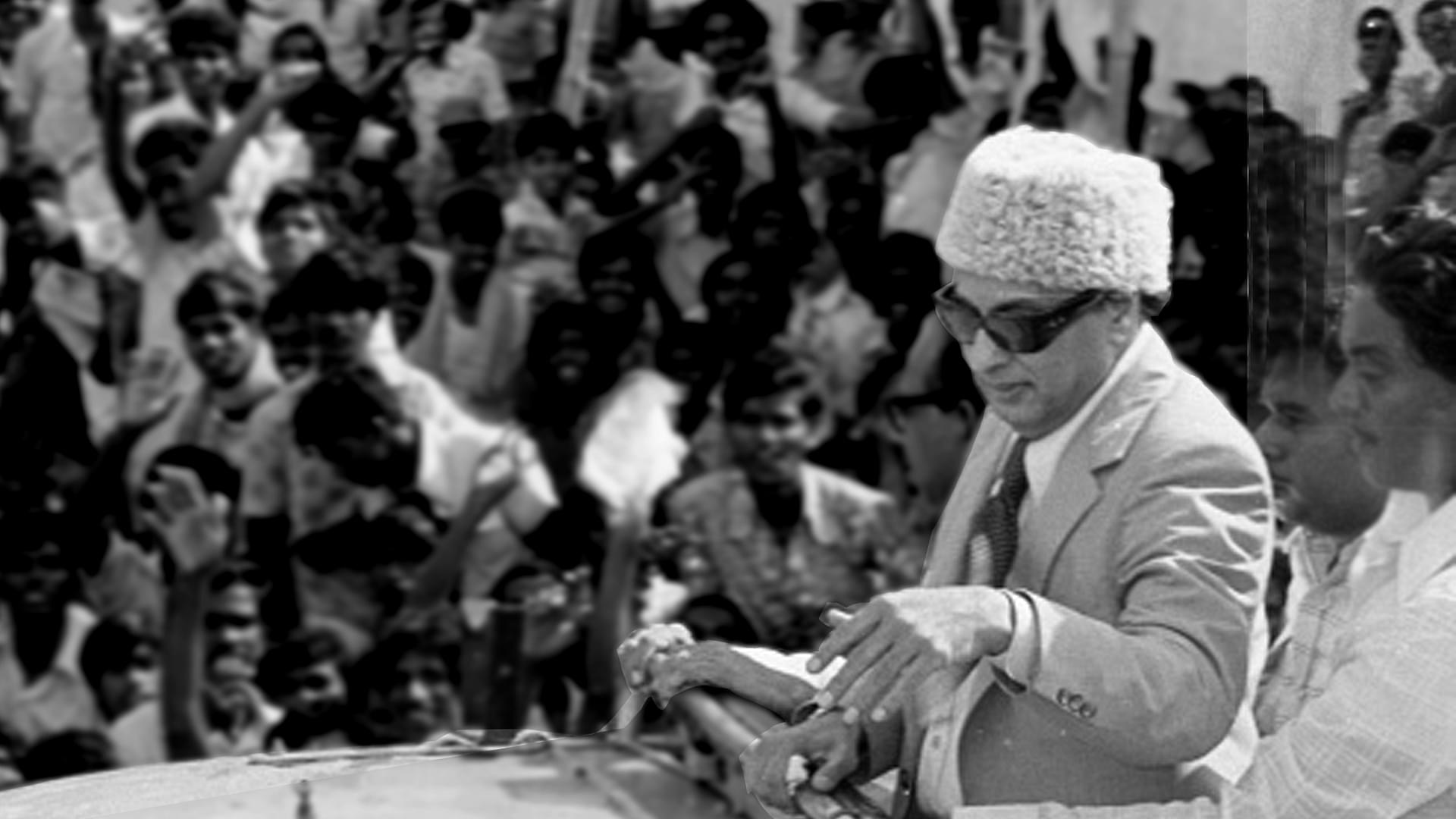 In the political history of Tamil Nadu, there have been Dravidian movements representing the complicated psychology of Tamils. The inherent anti-Brahmin tendencies in the early non-Brahmin organisations were meticulously nurtured by colonial strategists as well as evangelists. As the archbishop of Madurai wrote in his book in the 1950s, the Dravidian movement was like ‘the time bomb’ which the Church had maintained in Tamil Nadu to destroy Hinduism. The Justice Party, for instance, was wavering between the non-Brahmin Hindu identity and anti-Brahmin, anti-India identity. For example, non-Brahmin Hindu Mahasabha leaders like Barrister Jayakar had been asked to preside over non-Brahmin conventions in Tamil Nadu.

Though the Justice Party had always remained anti-Congress and pro-British, it was with E V Ramasamy that the party started taking an openly virulent, racist, anti-Brahmin, anti-India stand. Ramasamy combined racist hatred towards Tamil Brahmins and a fascination for anti-democratic ways in his whirlwind propaganda throughout Tamil Nadu. Unlike the real social reformers before him, who achieved solid milestones in social emancipation, Ramasamy’s movement created deep fissures in society and created an impression that South India in general and Tamil Nadu in particular wanted to either secede from India or remain under British rule at the time of independence.

It was at this point that the Black Shirts movement created by Ramasamy started experiencing the first voice of dissent. Ramasamy’s primary lieutenant C N Annadurai, who was more learned than he was and who had not much fascination for the anti-democratic attitude of Ramasamy, openly rejected the latter’s call to treat Independence Day as a day of mourning.

The political party that emanated from the Dravidar Kazhagam was the Dravida Munnetra Kazhagam (DMK). Soon, the DMK had to abandon its secessionist demands. It is said that, apart from the legal threat from Nehru, Anna himself had a change of heart when he saw the cultural unity of India. Under him, the DMK even recruited Brahmins and boasted that they had Brahmin members in their ranks. Anna venerated Swami Vivekananda and consented to have representation in the Vivekananda Rock Memorial committee when he was approached by Eknath Ranade of the Rashtriya Swayamsevak Sangh.

At the time of Anna’s demise, the DMK comprised both the hardcore Dravidian racist elements, which belonged to Ramasamy’s undiluted racist-fascist ideology, and Anna’s somewhat liberal diluted Dravidian politics, which primarily accepted the unity of India as axiomatic.

One can say in hindsight that when MGR was expelled from the DMK, and formed the All India Anna Dravida Munnetra Kazhagam (AIADMK), apart from the visible personality clash between him and M Karunanidhi, there was an underground fault line running between Ramasamy and Anna.

MGR provided a non-Brahmin, yet all-inclusive, safe passage to Tamil people who had almost accepted the Dravidian race theory as true, though deep inside they realised that the racial interpretation of the North-South divide was incorrect.

In his movies, MGR presented himself as a virtuous person free of all vices. The image he cultivated was, in a way, antithetical to what Ramasamy preached to the masses. The latter rejected all virtues as Brahminical conspiracies. MGR promoted all the virtues in his films. He was a frolicking romantic hero and yet sans all bad habits. He never smoked or drank on screen. Even as female actors in his film would sing dreamy duets with him, he would declare all except the ‘heroine’ as his sisters. And his heroine would strictly adhere to ‘Tamil virtues’. In other words, MGR offered to the masses a Tamil culture that was sanitised of Ramasamy’s racism.

In his autobiography, serialised in a popular Tamil weekly, MGR even warned about the demographic change that would come about if family planning was to be practiced only by Hindus. He was also concerned about religious conversions occurring in the state. In fact, it was during his time that the state government first issued a notification mulling legislation against forced conversions.

MGR’s masterstroke was the mid-day meals scheme. The scheme itself was envisioned by the legendary K Kamaraj. The concept that students’ food should come from society or state is a very ancient concept which Kamaraj adapted to the modern school system. In fact, this in turn was influenced by a similar scheme in vogue in South Travancore state implemented by another great legend C P Ramaswami Iyer. The scheme was neglected by the DMK government. But when the AIADMK government was in power and particularly experiencing a strong anti-incumbency feeling among people, MGR, who himself had suffered from poverty in his youth and had gone hungry many a day, implemented a revitalised mid-day meals scheme.

Initially, it was strongly attacked by many economists and political observers including Cho. However, the critics were soon proved wrong, as the scheme helped the state stand high in the human development index.

MGR broke away from the Dravidianist tradition of not wishing Hindus during their festivals. He not only regularly wished Hindus but he sometimes also went out of his way to engage in rituals for the sake of the state’s welfare. When the state was once under severe draught, MGR used the proximity of one of his ministers to the controversial godman Chandraswami to conduct some Yagnas to placate the rain god. His devotion for Goddess Mookambika was well-known, and when he was criticised once for making some personal donations to the deity, he quipped that he saw his mother in the Goddess and, hence, not strayed away from so-called rationalism.

MGR also eased to a large extent the deep division and conflicts between the scheduled communities and others, at least superficially. He was perceived by various traditional jatis from coastal communities, to agrarian communities, to scheduled castes and tribes as their own. The new urban proletariat worker communities like Rickshaw pullers also thought of MGR as their own, thanks to his films. This was social engineering in an ingenious way.

One can even say that in a way MGR exorcised the racist and secessionist tendencies of the Dravidian movement to a large extent, and made Tamil Nadu, which once threatened to spiral out of national mainstream, return and reconnect emotionally to the rest of India. Leftist intellectuals even called AIADMK the Dravidian Jan Sangh. It is another sad story that the current Tamil Nadu Bharatiya Janata Party has completely lost the plot to take forward what MGR achieved for nationalism in the hard terrain of Dravidian polity.

If Tamil Nadu is today not a Jungle Raj like Bihar, or a hotbed of secessionism like some other states, which it would have become had the DMK ruled when he did, the credit goes to MGR, and this is his greatest achievement. It is more interesting because he never had any such plans. Most of his best moves came from his heart rather than his brain, and his heart was very much a humane Indian heart.