Misdirected Muslim Anger: They Should Be Protesting Against Romila Thapar And Irfan Habib, Not Modi And Shah 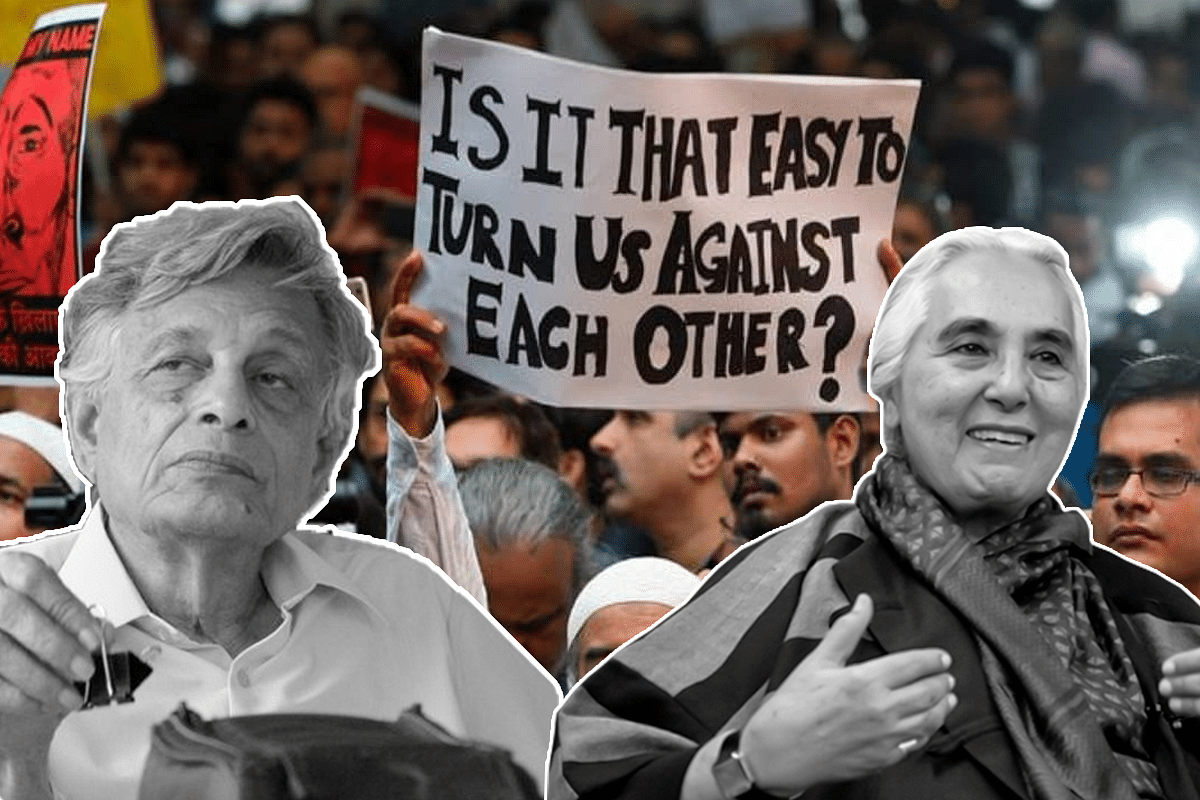 Muslims who are out on the streets, from Shaheen Bagh to the Aligarh Muslim University (AMU) and Jamia Millia, in protest against the Citizenship Amendment Act 2019 (CAA) are clearly angry.

A video clip that has surfaced recently shows Faizul Hasan, former AMU Students Union chief (view here), talking about this anger among Muslims in incendiary terms. He claims that Muslims have been “patient” (presumably with the Indian state) from 1947 to 2020, and that if they had wanted to, they could have broken the country anyway.

It is worth ignoring the video’s provocative content and focus on the anger that many Muslims obviously feel, not just over CAA, but many other perceived slights and biases, real or imagined.

The one thing they have not asked themselves is this simple question: if they have been “patient” since 1947, why blame Narendra Modi government, which came to power less than six years ago? And if anger there is over real or imagined grievances, should the blame not be laid at the right door?

If they calm down and introspect, India’s angry Muslims will find that the people who let them down were the very same people who claimed to be fighting for “secularism” on their behalf — the various opportunistically “secular” parties and the Left academicians. The CAA and Bharatiya Janata Party (BJP) are mere convenient targets because they happen to come as a package right now.

India’s “secular-Left” outrage brigade (SLOBs, in short) have done the Muslims a lot of harm by hiding all the facts they considered inconvenient for “sensitive” Muslims in India. If they are unable to face the hard reality of CAA today, it's because they have bought into the lies and half-truths they have been told by their alleged benefactors.

Consider the lies and untruths they have internalised so far.

One of the big lies being bandied about is that Indian Muslims “voluntarily” chose India in 1947 when they could have chosen Pakistan. The fact is they voted solidly for Mohammed Ali Jinnah’s Muslim League. In the 1946 elections, which was considered a kind of plebiscite on Pakistan, the Congress won over 90 per cent of the vote in non-Muslim constituencies, while the Muslim League won not only big in Bengal, but also the Muslim minority provinces in Uttar Pradesh and Bihar, winning 54 out of 64 seats in the United Provinces, and 34 out of 40 in Bihar. The only party that got trounced was the Hindu Mahasabha.

Put simply, Indian Muslims voted for Jinnah, and Indian Hindus voted for Congress secularism by defeating the Mahasabha. Even today, it is Muslim parties that win big in Muslim-majority areas under the banner of the Indian Union Muslim League (in Kerala), the AUDF in Assam, and the AIMIM in Hyderabad.

Post-Partition, India’s elite Muslims left for Pakistan, leaving the poor and their less educated brethren in “secular” India. These Muslims probably stayed in India because they could not afford to leave home and hearth, especially when the Congress had promised them protection.

So Lie No 1 that needs nailing is that Indian Muslims voluntarily chose secularism in 1947. They chose Jinnah. In fact, the only Muslims who chose secular India were those residing in the North West Frontier Province, who voted against Partition, but it was the Congress which abandoned them. Khan Abdul Gaffar Khan, or Frontier Gandhi, was eternally bitter with India for this betrayal by the “secular” Congress.

The truth Indian Muslims were never told — or not told forcefully enough — is the fact of persecution of Hindus and other non-Muslim minorities in Pakistan and Bangladesh, who will be the main beneficiaries under CAA.

Today’s protesting Muslims have been led to believe that they are the ones being discriminated against in CAA, when the reality is that they were never told the truth of the persecution of non-Muslims in our neighbourhood. They haven’t even been told the complete truth about the ethnic cleansing of Hindus from Kashmir Valley, and have been taken in by the lie that this was a plot by former Jammu and Kashmir governor Jagmohan to defame the Muslims in the valley.

Would the anti-CAA protests have been as forceful if Muslims had been told repeatedly that the conditions for non-Muslims living in Muslim majority states, including a Muslim majority state inside India, were far from ideal? If you are told that every inconvenient fact is a plot by Israelis and Hindus to defame Muslims and Islam, why would you accept that CAA is what it is claimed to be — a move to help persecuted peoples in Islamic countries in the neighbourhood?

Not telling Muslims the truth about persecution does not rank as a blatant lie, but hiding the truth from them is no different. This is tantamount to Germans being shielded from the reality of Hitler’s gas chambers and the holocaust, or Hindus being reassured that the entire caste system was a British plot and that no caste discrimination ever existed before colonial rule. An important truth not emphasised enough is tantamount to a lie.

The third lie is the one being perpetrated by Left academicians about Islamic history. It is fair to say that not all Islamic rulers were bigots; it is also fair to say that even the bigots sometimes balanced their bigotry (Aurangzeb and Tipu Sultan did favour some temples), but to be told that all temple destruction under Muslim rule was the result of politics and not religious extremism is surely a lie.

Every Muslim knows in his heart of hearts that iconoclasm is central to Islam, with the prophet himself destroying idols in Mecca on his return from Medina. Also, is it not more likely that when a Tipu Sultan offers donations to a Sringeri Mutt it was because he could not alienate all Hindus at the same time?

It is logical for a ruler from a minority community to keep the majority divided so that there is no threat to his rule. But no history book even mentions this possibility. Indian Muslims are more inclined to believe a Romila Thapar or an Irfan Habib or even an Audrey Truschke, who have whitewashed Islamic bigotry than a Meenakshi Jain or a Koenraad Elst, who have studied the matter far more deeply.

Even in the Ram Janmabhoomi case, the likes of Habib have completely denied archaeological evidence and attempted to discredit the only Muslim who spoke the truth (former Archaeological Survey of India member K K Mohamed). The latter said in his autobiography that the Babri Masjid was built over the ruins of an existing temple. The only fact in some doubt is whether a temple was actually demolished to build the mosque, but even this proof is overwhelming in the case of the Kashi and Mathura temples, where the evidence of mosques being built over existing temples is still visible to the naked eye.

When you have been repeatedly told lies about iconoclastic Muslim rulers and fed falsified history, why would you not be angry if a Supreme Court verdict awards the Ram Janmabhoomi site to the Hindus?

A half-truth Muslims have been told relates to the Sachar commission report, which put Muslims at the bottom of the economic totempole. The low economic status of Muslims is a reality, but the underlying reasons for this have less to do with discrimination than the fraud called “secular” Indian politics.

Post-independence, a petrified Muslim population was offered a protection deal by the Congress party: a block vote in favour of physical safety. Once this block vote was realised, the “secular” parties had no interest in improving the economic well-being of the Muslims, who then had to educate themselves in madrassas and under conservative clerics. Thus they got special personal laws, but no training in skills and higher education. They were offered polygamy and instant triple talaq instead of gender equal laws.

Even as a middle class emerged among Hindus, a Muslim middle class failed to emerge till well after the 1990s, when Muslims realised that the Congress party could not protect them against an “angry” Hindu majority, and they would have to lift themselves up by the bootstraps. Muslims lacked a secular leadership after 1947, as the elite had moved to Pakistan.

They thus started with a poverty handicap, and a leadership vacuum, and it is these two factors that explain the current educational and economic gaps between Hindus and Muslims. And even this gap persists largely in Uttar Pradesh and Bihar, and not the south.

If I were a Muslim I would be angry. But if I were to introspect, I would realise that the people responsible for this are not the BJP or Narendra Modi or Amit Shah, but the people who I trusted in the name of secularism.

The anger against CAA is misplaced; it is the Left and “secular” group that should be the target of their anger.

They should be protesting outside the homes of Romila Thapar and Irfan Habib and the Congress. Not against CAA, Narendra Modi and Amit Shah.