Modi Likely To Achieve What No One Before Him Has: Solve The Naga Issue And Bring Lasting Peace To North East 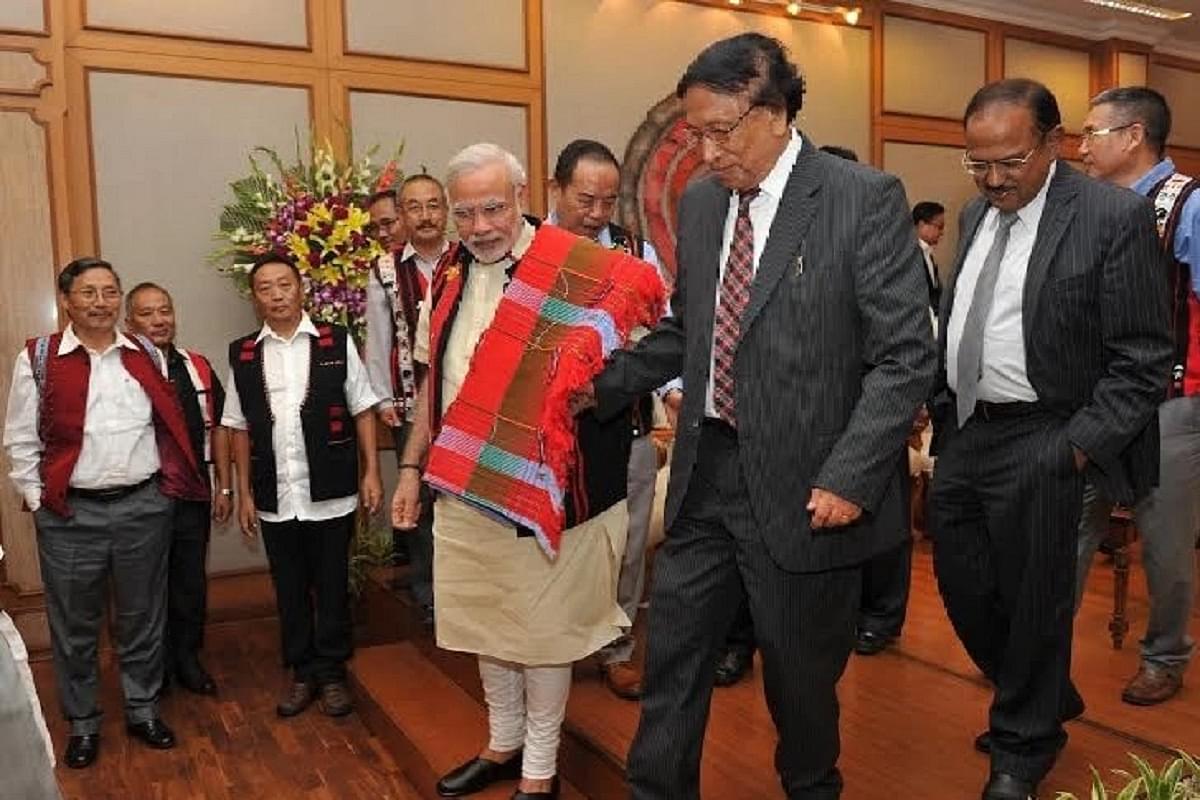 Prime Minister Narendra Modi is likely to remove the foremost hurdle to lasting peace in North East India by mentoring a final solution to the long-vexed Naga issue.

According to top officials from the Union Ministry of Home Affairs (MHA), a breakthrough in the deadlocked talks with the primary Naga insurgent group — the Thuingaleng Muivah-led faction of the National Socialist Council of Nagaland (NSCN) — is likely very soon.

The NSCN (Muivah), considered to be the ‘mother of insurgencies’ in the once-restive region (read this), had ceased hostilities after a ceasefire agreement with the government of India in 1997.

Since then, endless rounds of talks have been held with the insurgent outfit but a final solution has eluded both the negotiators and interlocutors.

The Issues That Caused The Deadlock

The negotiations have been deadlocked over two core issues: a separate constitution — which the NSCN terms as ‘Yehzabo’ — and a separate flag for the Nagas.

Muivah has been insisting on these, but the Union government has consistently turned down these two demands.

The government of India’s position has been that the Indian Constitution does not have any provision for a state having a separate flag or constitution. And if such a demand were to be conceded, some other states or ethnic groups could also make similar demands.

The possibility of a separate constitution and flag for the Nagas was also made untenable after the abrogation of articles 370 and 35(A) that conferred special status on the erstwhile state of Jammu and Kashmir.

There was no way the Modi government could be seen as giving to the Nagas what it took away from the Kashmiris.

The Union government has made it clear in no uncertain terms to the NSCN that there cannot be two flags and two constitutions in the country.

A couple of top bureaucrats in the MHA who spoke to Swarajya said that a way out of the imbroglio has been found now.

The Union government has suggested a novel solution to the deadlock over the ‘Naga constitution’.

The Union government has proposed the formation of a committee of legal and constitutional experts to examine the ‘Naga constitution’ and suggest the provisions which can be incorporated in the Indian Constitution.

“Of course, no provision of the ‘Yehzabo’ which militates against the unity and integrity of the country will be considered for incorporation,” the senior bureaucrat added.

As for the demand for a separate flag, the Union government has conceded that such a Naga flag can be used in social and cultural functions, but not in government offices or functions.

No flag in the country can be above, or replace, the tricolour, the Union government’s representatives made it clear to Muivah and his emissaries.

Mishra, former special director in the Intelligence Bureau (IB), has been handling talks with the Nagas and is special adviser to the MHA. Mishra discussed the contours of the proposed ‘final agreement’ with the Naga political and civil society leaders.

The Naga delegation, it is learnt, has supported the Union government’s proposal. They have also resolved to bring Muivah on board.

Another contentious demand by Muivah — that of integrating the Naga-inhabited areas of the neighbouring states of Assam, Manipur and Arunachal Pradesh with Nagaland — had been firmly turned down by the Union government.

Muivah has, for long, advocated the creation of ‘Nagalim’ or ‘greater Nagaland’ by incorporating not only the Naga-inhabited areas of the three neighbouring states, but also Myanmar, with Nagaland.

“It was made clear to Muivah and the NSCN delegates a long time ago that this demand cannot be met since the three states will not agree to it. And they (the NSCN negotiators) were also told that if Muivah could convince the three states to part with the Naga-inhabited areas of their states, the Union government would not have any objection. Muivah ultimately understood the futility of pursuing this untenable demand,” said another MHA bureaucrat in the ministry’s North East Division.

Prime Minister Modi, it is learnt, is keen on resolving the Naga issue and arriving at a final solution by the end of this year.

Dispute Over Interpretation Of ‘Framework Agreement’

Modi had overseen the signing of a ‘framework agreement’ (read this) between the Union government representatives and the NSCN’s Muivah and then chairman (late) Isak Chisi Swu.

But this agreement or contrasting interpretations of it by the NSCN and the Union government caused a lot of disagreements and disputes between the two sides.

One sentence of the agreement spoke of “sharing sovereign power”, and the NSCN interpreted it as the Union government’s commitment to granting a fair degree of sovereignty to the Nagas.

But, according to New Delhi, “sharing sovereign power” meant “providing a reasonable degree of autonomy” to the Nagas to manage their own social and cultural affairs and safeguarding their identity.

This contrasting interpretation of the contentious phrase was set to rest earlier this year with the Union government stating unequivocally that granting any degree of ‘sovereignty’ was simply out of the question.

New Delhi made it clear that no sovereign country can or will grant even token sovereignty to a portion or ethnic group within the country.

Why Resolving The Naga Issue Is Important

The importance of a final solution to the Naga issue transcends the political boundaries of Nagaland and holds immense importance for the entire North East.

That’s because the NSCN, which has been waging war against the Indian state since 1956, is considered to have spawned insurgency in other parts of the region by other ethnic groups of the region.

The NSCN, which had received shelter, training, military hardware and support from China and Pakistan, had also helped other insurgent groups in the region with training and arms. The NSCN and Muivah provided inspiration to these outfits, especially in Assam and Manipur.

Though insurgency is now mostly a thing of the past in the North East, its last vestiges can be eliminated once a final solution to the Naga issue happens.

The unresolved Naga issue is also a roadblock in the realisation of Prime Minister Modi’s ‘Act East’ policy and his vision to transform the region into a manufacturing and logistics hub and a gateway to Southeast Asia.

The resolution of this issue, which is holding up the dawn of peace and progress in the North East, will be a landmark achievement of Prime Minister Narendra Modi.

For More On The Naga Issue Read here, here and here.