Much Rides On Aung San Suu Kyi’s Visit To India 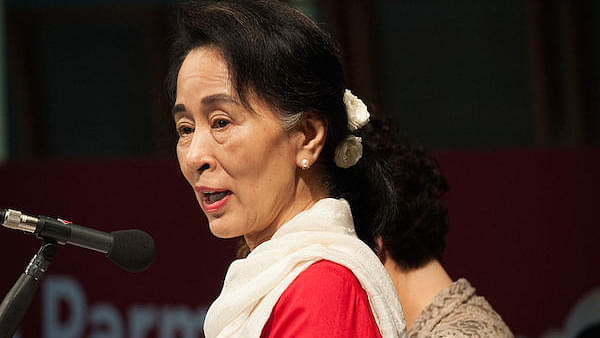 Aung San Suu Kyi is coming to India in October. She will guide Burma in the foreseeable future. It is best for India to square things with her and it would be eminently sensible to invest in the Burmese stateswoman’s friendship and goodwill for this country.

Countries are usually terrible at crystal-gazing. Worse, they are often unable to decide the better course in foreign policy when the external situation is confusing. It does not always help to be ideological and Realpolitik brings constraints and consequences of its own.

When India inaugurated ties with the Burmese military junta, a lot of people were shocked, and not least Aung San Suu Kyi. From a land that produced M. K. Gandhi, so the stock narrative went, this was the last thing that was expected. But states may be moral up to a point. The Chinese were making inroads into Burma and India had to counter their influence.

The Indians and the Burmese get along better that the Burmese and the Chinese. The Chinese come with the hubris of a “Great Power” and aim to swamp the country with the Chinese way of life. The Burmese resent this. They are an insular people and possessive of their unique Buddhist traditions, one of the things which bind them to India.

So while China beat India to Burma, it soon found the going rough. During military rule itself, the Chinese discovered themselves blocked in major infrastructure projects. A view took hold that the Chinese were colonisers of sorts, and that Burma’s polity and culture were under threat. This has happened wherever the Chinese have gone. It got more angular in Burma which has remained obsessively suspicious of the “foreigner”.

When Aung Suu Kyi visited China recently to balance her tour to India, the Chinese tried to get her moving on the projects, especially a hydropower dam. She gently sidestepped the pressure and instead urged China to maintain peace and tranquillity on the border with Burma. It was a polite reminder to curb anti-Burma irregulars active from the Chinese side.

At the least, she is a Burmese nationalist. While she will never proclaim it in those words, she is wary of China. She is particularly wary as Burma struggles to find its feet with the first democratic government in the country in decades. She wants no missteps, and she desires that Burma’s neighbours understand her anxiety and resolve to expeditiously fetch her country to the community of civilised nations. The last thing she wants is Burma to be pulled into Sino-Indian rivalry. But, her heart is with India.

Which is why it is important to explain to her India’s decision to go with the Burmese junta in the past. Of her own account, she will not seek an explanation, and nations usually do not offer explanations of that sort. But it will break the ice. In any case, it is good that India stepped in. It gave Burma an option to show the door to the Chinese.

India has its own issues with Burma. Besides the Chinese angle, there is the Naga insurgency situated in Burma. Burma cannot stop Indian military raids against the insurgents, but countries usually don’t cross foreign borders with impunity even for a just cause. Aung Suu Kyi wants transparency on the raids— by which she probably means prior intimation. Apparently, Burma is sensitive to India’s concerns, and it could be built upon during her visit. The scope for cooperation is wide in other areas as well.

Seeing the galloping food inflation, India can explore cultivation of lentils and other agricultural produce of high demand in Burma. The Burmese are interested but have failed to draw a response from India which is surprising for Prime Minister Narendra Modi’s widely known proactivity in such matters. Modi, himself, must open up with respect to Burma, and it would be short-sighted to view it solely in terms of competition with China. Aung San Suu Kyi would expect nothing less when she meets him.

It is tempting to compare Aung San Suu Kyi to other leaders who came to power the hard way, including Nelson Mandela and Cory Aquino; however, she is in a class of her own. She might seem fragile in her physical person and embody the picture of Asian femininity with flowers in her hair. But she is made of steel, especially where Burma is concerned.

If there was any romanticism in her, it is gone. Long years of imprisonment and separation from her family (during which time her British husband died) have not made her bitter or cynical. But she is certainly more pragmatic. Like Modi, she is deeply wedded to her country’s culture and traditions, though it might not be very apparent in her case.

Aung San Suu Kyi will define India-Burma relations, from the Burmese side, for some time to come now.

This piece originally appeared on News Insight and has been republished here with permission.