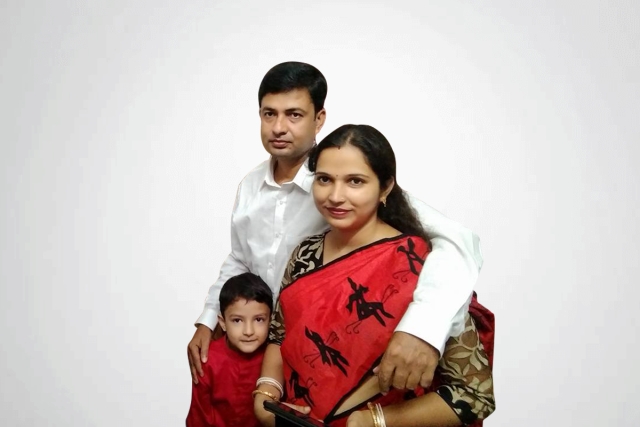 Something doesn’t quite add up here. The police claimed on Tuesday to have solved the barbaric murder of a school teacher, his pregnant wife and their eight-year-old son with the arrest of a mason. But the claim has raised more questions than it has answered.

Bondhu Prakash Pal, 35, his pregnant wife Beauty Mondal, 30, and son were murdered at noon on 8 October inside their house at Jiaganj in Bengal’s Murshidabad district. All three were hacked to death and the brutality of the crime shocked and shook the nation.

Bondu Prakash was associated with the RSS; he had started attending the weekly ‘milans’ (informal get-togethers) organised by the Sangh. However, he was not a full-time member of the organisation, nor was he associated with any political party.

The triple murder generated a wave of angry reactions from the Bharatiya Janata Party (BJP), Bengal’s Governor Jagdeep Dhankar and many citizens.

On Tuesday (15 October), the police claimed that a 20-year-old mason, Utpal Behera, committed the murders. Utpal is a resident of Sahapur village, where Bondhu Prakash also hails from and used to live before he shifted to Jiaganj two years ago.

According to the police, Bondhu Prakash was also an insurance agent for PNB MetLife Insurance and had sold a policy to Utpal.

Utpal, said the police, had paid two premiums of a little over Rs 24,000 each to Pal. But Pal had given him a receipt for only one payment and not the other. Utpal had reportedly been asking Pal to give him the receipt for the remaining amount or return the money to him.

A few days before the murder, Utpal had called up Pal and, claim the police, had been abused by Pal. This enraged Utpal, who then plotted the murders.

But there are major loopholes here. Insurance companies these days only accept cheques or NEFT transfers made out directly by the policy-holders themselves and not cash from agents acting on behalf of the policy-holders.

So how could Pal take money from Utpal Behera for depositing it on his behalf with the insurance company? The police have also failed to come out with details of the insurance policy.

The police claim that Utpal committed the three murders in just five minutes between 12.06pm and 12.11pm. Utpal is a frail young man who is just a little over 5 feet tall, while Pal was 5’8” and quite well-built.

The police say that Utpal attacked Pal as soon as the latter opened the door of his house. But the nature of the injuries sustained by Pal shows that he was attacked from behind.

Police say Pal could have opened the door of his house and invited Utpal inside, and when he turned his back to Utpal he was attacked from behind. But why would Pal invite Utpal, a person who he had reportedly abused just a few days ago, inside his house?

The nature of the injuries sustained by Pal do not suggest that he put up any serious resistance. How is that possible? Why would a well-built man much taller than his assailant not put up any resistance to a brutal attack with a chopper?

It would also have been natural for Pal to shout, thus attracting his neighbours and his wife, who was in the next room. But the body of his wife was found lying on the bed and, again, there were no signs of Beauty having put up any resistance.

None of the neighbours heard any screams or noise. The murders were committed in broad daylight. How is it possible that a man facing a fatal attack and being hacked to death did not shout even once?

The police claim that after murdering Bondhu Prakash, Utpal went to the next room where his wife (Beauty) was lying in bed and killed her. How is it that Beauty also did not scream while being killed? Even the 8-year-old child did not make a noise while he was nearly decapitated?

The police, when asked these questions, suggested that the neighbours were busy with the Durga Puja festivities (the day was Dashami) and thus would not have heard the family’s screams.

“How is that possible? Three people being hacked to death one after another would let out blood-curdling screams that would have alerted the entire neighbourhood. It is also inconceivable that the wife of a man being attacked with a chopper and killed in the next room would not hear anything and would simply lie in bed.

“And when the killer comes for her, she also does not put up any resistance or lets out a scream. It was noon and the entire family was awake, not asleep,” said Dipankar Banerjee, a retired IPS officer.

“And it is totally inconceivable that he (the alleged murderer) would not have suffered even a simple injury himself. Pal, being more fit and stronger than Utpal, would logically have not only put up a stiff resistance, but also kicked, punched or hurled objects at Utpal,” he pointed out.

But reporters who saw Utpal in police custody say they did not notice any visible injury marks on his face or limbs, nor did the police say anything about any injuries he (Utpal) may have sustained.

The police claim that Utpal has confessed to his crimes. But such custodial confessions have no value and can often be forced. Also, Utpal’s parents have contested the police charges. They, and the Beheras’ neighbours, say that Utpal is a meek and gentle soul and is not given to fits of anger.

There is no way, they say, that Utpal could have so diabolically plotted a gruesome murder to exact revenge for an alleged insult or for Rs 24,000. “Such murders require a criminal bent of mind and planning. My son is a gentle person who would not even harm an insect. He never harbours any grudge and has never even shouted at anyone,” said Utpal’s father Madhab Behera.

The social media, which erupted in outrage over the murders, is quite skeptical about the police’s claims. A number of social media users have alleged that the police are trying to cover-up the gruesome murders.