NEP And Its Discontents 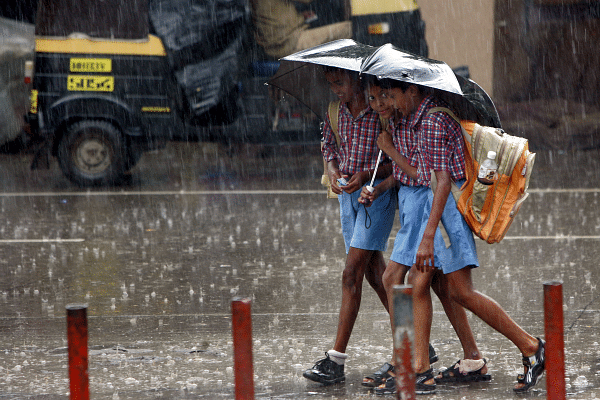 School children on their way back home on a rainy afternoon. (Manoj Patil/Hindustan Times via Getty Images)

The draft of New Education Policy (NEP) ultimately saw the light of the day at the end of May. Twitter trolls who had lambasted the government over delaying the release of the NEP, as if a policy document in itself is a panacea for India’s education system, were hit back with a 484-page book.

The list of people consulted by the drafting committee has many of the leading lights of the education intelligentsia of India. The draft policy has mostly got positive reviews. Perhaps, people were genuinely impressed; perhaps, a few doubters felt the weight of opposing the star-studded approvers; others perhaps like the trolls never actually cared for the policy but were just having fun outraging. So, for someone who feels that the NEP is a wasted opportunity, this author finds himself in a small, frustrated minority.

This piece will reflect the concerns regarding school education, mostly.

For a policy that sets out a road map for the next few decades, it should have begun by imagining a future. It just says India will be a $10 trillion economy in 2030s. How will the world and the society be, in say 2030? How much will be the infusion of technology in everyday lives? Will people consume education the way they do now? Are there any hints pointing to a particular future, such as a possible advancement of particular technologies, changes in the behaviours and attitudes of young people, trajectory of progress of other advanced countries, etc? The committee is mostly unconcerned about these questions. (There is a chapter on technology buried under “Additional Key Focus Areas” starting at page 340) .

Building on the previous point, it would have been prudent to have people in the committee, who have thought about the future, or even better, are a part of making it. That the government did not think about having a Sundar Pichai or Satya Nadella or a Byju speaks poorly about it. The frustrating part of government committees is that the government does not think about them holistically. If it is education, the formula is to fill the committee with people who have background in education. (Still, Manjul Bhargava, the genius math professor from Princeton, was an inspired choice.) Also, the many recommended structural changes needed someone who understood bureaucracy well both at the centre and state levels. That was absent too. More on that later.

Section 8.3 says, “Education and schools are not marketable goods.” But it is an essential good of which government is a poor supplier. Hence, 40 per cent of our children attend private schools. Don’t you think the committee should have looked at the education system in India in totality and provided forward guidance? Though the committee talks about “public spirited” private schools, it refuses to acknowledge private schools as equal partners in educating our children. It does not follow its own exhortation— “not stifled by treating them with suspicion”.

Had it acknowledged the bitter truth about government-run schools, the document would not have turned out to be what it is – a manifesto to improve government schools – but one that encourages good education entrepreneurs. The committee should have, perhaps, followed its own advice of being “outcome based”. The committee has closed it eyes to the fact that people (for whom the policy is being made) are continuously losing faith in government schools. It has not clearly thought through the macreconomics of education – areas in which governments don’t work well and areas where markets don’t.

This generation of kids are digital natives. It can be safely assumed that some committee members still struggle with smartphones. Perhaps, the committee members view technology as interference to studies rather than as an enabler. That theory can be contested, but it is undeniable that children are consuming more technology based content and we would have to think creatively about using it for education. The National Education Technology Forum should have been at the heart of the document.

Education falls in the concurrent list of the Constitution. It would have been pertinent to move early childhood and primary education to the states completely. This would have pinned accountability on the states. There would be political pressure and would consequently lead to appointment of talented education ministers. Mother tongue-based education, child health issues could have automatically got more thrust with an integrated child development ministry in the states. No committee member perhaps has the experience of thinking through larger structural bureaucratic reforms in the context of education. Having said that, one has to appreciate the recommended thrust on early education and its demerger from the Ministry of Women and Child Development.

One of the creative policy interventions of Modi 1.0 was promoting innovation in upper primary and secondary schools through its Atal Innovation Mission. With almost near-total enrolment in primary education, the thrust of the next decade should have been on middle schools. Though the policy speaks well on Indic education and languages, a comprehensive middle school action plan for the 2020s (beyond the 5+5+3+4) would have been more pertinent.

The draft policy in the middle parts turns out to be a mostly boring document that gets into the nuts and bolts of restructuring government’s education bureaucracy. It follows a top-down, big-government approach. Some of the prescribed reforms run into 2030s. For example, the policy says by 2030, all teachers will have a four year B. Ed degree. Do you think aspirational India is going to wait for government to reform its systems? The people, along with responsive elected representatives, will ultimately determine the actual policy that will be implemented.

The policy drafters never seem to have learned anything from failed big-government programmes. The proposed system still leaves scope for corruption and nepotism. The inefficacies of the bloated system, even when rationalised, will be a curse on the people. The babudom, on the other hand, will love the recommendations. It makes them more relevant. It is incremental and offers nothing creative or radical. The policy has enough material for the bureaucracy to play around for the next 15 years. In fact, the bureaucrats will blame the policy later for their own shortcomings.

If one believes in the dictum of “minimum government, maximum governance” or good old meritocracy, two pertinent questions that will be asked are: 1. How many institutions are recommended to be eliminated/rationalised? 2. How will officials, principals and teachers be fired ( “held accountable”) for non-performance? How will you deal with teacher unions? The policy is mum on such questions.

Then there are many jholawallah ideas such as the National Tutors Program and Remedial Instructional Aides program. They envisage unimplementable and woolly- headed ideas of community participation, that lack incentives or oversight.

Ultimately parents and children will determine education outcomes. The mother will choose the best school for her child, public or private. The policy should have empowered her with choices. She will again face the repressed, sub-optimal ecosystem. The market forces, under the continuing constraints will supply to the demand either through private schools started through greasing palms or radically, through use of technology. There will be a few cases on improved delivery through government schools that will garner publicity. Basically, the caravan as it is now will move on, fitted with a steam engine.

In conclusion, the NEP does a good literature review of all post Independence policies and ideas and goes on to tinker around the edges. It offers no great vision for our country. In such a momentous time in our history, we could expect at least people who recommend policies to be bold. But the directions of a policy committee will not run the world. The onus is clearly now on the executive to steer the boat.