Niranjan Jyoti: How should the Subaltern Speak? 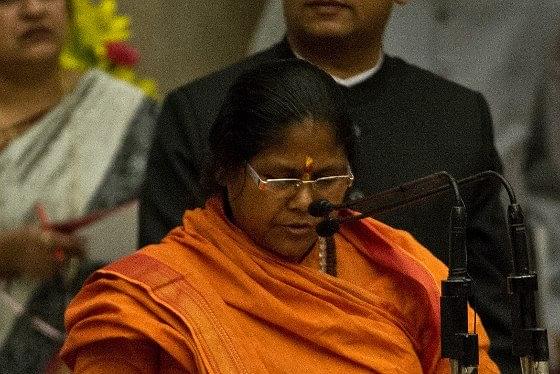 The problem that members of the Anglicised leftist elite has with women like the sadhvi is not that the subaltern is speaking but that she is not following their script.

Two recent comments that Sadhvi Niranjan Jyoti made in an election rally in Delhi have created an uproar. One charge is her saying “Muslims and Christians were children of Ram”, the other that people had to choose whether they wanted to have a “Ramzaadon ki sarkar ya haramzaadon ki sarkar.” The predictable uproar has produced more heat than light. But the subtext of the remarks exposes different views of India and points to the hypocrisy of the professed champions of the subaltern.

Some years ago, I was at an academic conference in the US. During a break, I was sitting with a group of well-known Indian-origin academics, post-colonials, historians, subaltern theorists. They were speaking disparagingly of an Indian politician with snickering comments and giggles, speaking of her uncouth manner and illiterate background.

I soon realized it was Uma Bharati. The BJP was even more of an untouchable than it is now, so political opposition was hardly surprising.  I was a naïve outsider to this circle and was shocked to know that the ridicule was not political but class-based—at the illiterate, less-educated, and  low caste and social class that Bharati inhabited. Uma Bharati is a low-caste woman from a poor rural background, who rose based on her fiery oratory and earth-bound feminism. The irony of the ridicule of these academics, who had just gotten of the podium pontificating the cause of oppressed subalterns, the Dalits and women, appeared to completely escape this illustrious group.

We see this phenomenon all over again. Part of the ridicule that Modi and the BJP acquired from the “left” academics and the Lutyens media was precisely that they did not inhabit their class space.  It came out in Mani Shankar Aiyar’s chaiwallah remark, but that was hardly a slip. Amar Singh recounts a conversation in which Aiyar speaks of  Mulayam Singh:

“We belong to the Oxford and Cambridge set…your leader can’t even articulate himself in English…Oh that bloody Mulayam—he looks just like me. It could be because my father visited UP at some point. Why don’t you check with Mulayam’s mother.”

Calling someone a bastard is, of course, par for the course for Cambridge set, just as the other England-educated barrister, Owaisi, who called Modi a dog (kutta, sari nasal kutte ki) after the latter had become PM, and called Salman Khan “haraami” for visiting Modi, in a public speech. The gori mem, Sonia, could call Modi a very un-parliamentary “maut ka saudagar”, no doubt her proxy for Satan, with nary a call for her resignation, and TMC’s St. Columba’s and Scottish Church College alumnus Derek O’ Brien called him “a butcher.” Calling him Hitler (Satan secularized) has of course been habitual for this entire class of spectrum of political, media and academic elites.

But the Oxbridge-educated are entitled to a pass that lesser mortals simply do not deserve, especially village-based, Hindi-speaking, non-college-going women. Sadhvi Niranjan Jyoti comes from the Nishad community of boat people.  She is a katha-vachak, a storyteller with an earthy direct style. She represents the oral tradition, the direct connect with the people, exactly the history and “her story”, told “from below”, that the Harvard-ensconced sub-alternists and their little Indian mimics tell us that we are missing out on. Not that all the Indian elite class are post-modernists. Many of them, on all sides of the political spectrum, are squarely modernists, still not having received the latest post-modern wisdom shipment yet.

The problem is not that the subaltern speaks but that she does not follow their script. Rather than the stories of Ram, imbibed from her community, if she had spoken of the “dangers of  Hindutva” and the necessity of class struggle, she could shoot someone, let alone just make a vulgar rhyme (from the Latin vulgus, “common people”), and be extolled as a revolutionary. Lalu Prasad, notwithstanding his loot, was the Lutyens darling for a while, for his earthy turn of phrase.

Other than the term “haraamzada,” which, technically, the patriarchy-decrying lot should just translate to a benign kiss-of-love-child, the Sadhvi made another comment that riles the secularati. Steeped in her environment of Ram-bhakti, she said that she regarded Muslims and Christians are children of Ram.

Now, if a politician in Pakistan had said Hindus and Ahmediyyas are children of Allah, he would no doubt be extolled for his inclusive ideas. Similarly, a US politician saying minority religious are equally children of God would also be considered inclusive (atheists are among the most looked down upon by the US public, and a relatively small percentage).

For the Sadhvi, Ram is the equivalent of God, except that unlike Jehovah and Allah, he is not a jealous one. She explicitly makes clear in later comments that when she called Muslims and Christians children of Ram, she fully supports their right to worship in whatever way they please. It is a statement of honour, not a statement of reduction. It is the basis for the depth of Indian pluralism, that law-based monotheistic secularism can simply not get to.

When the Sadhvi says “If they do not respect Ram, how can they respect the nation?” she has a better idea of why India is a nation than all the secular intellectuals put together. When she voices her rhyming katha-vachak style Ram vs Haraam, she is expressing her frustration at the colonized elite that don’t get her Bharat, have sold off the nation, looted us for decades, and kept us divided. All this while enjoying their parties, Scotch and Tejpal-fingers discussing fashionable social theories and turning their nose at the terrible patriarchal, caste-society they inhabit, while “yeh log”—their servants, the villagers, the vulgar wait on them. The gall of a Dalit female Ram-bhakt villager to point out their illegitimacy!