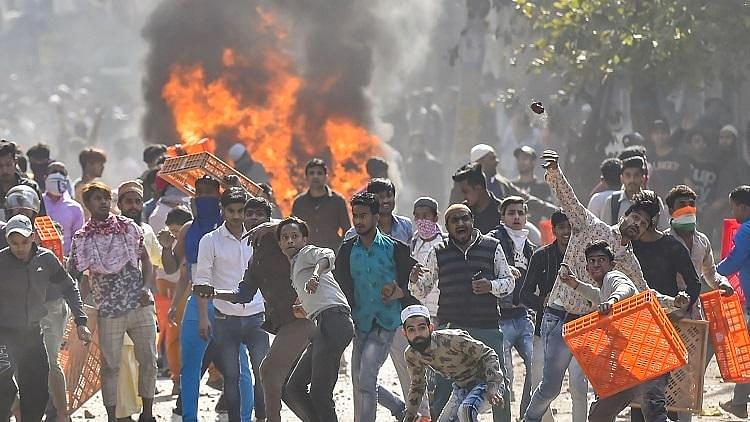 During the protests against Citizenship Amendment Act in January this year, when a journalist asked a protestor at Shaheen Bagh where all the food for so many people was coming from and who was funding the sit-in for over 40 days, he shot back saying that it was due to the miracle of Allah.

”Humein nahi pata paise ka. Hamein to raat ko (khaana) rakha milta hai ek jagah. Hum usko uthate hain aur baat dete hain,” the protester said. (We don’t know about the money. We find all the food at one place every night. We just pick it up and distribute it among others.). “Kudrati mil raha hai,” he added. (We are getting it miraculously)

The short video clip of this exchange between the protestor and the journalist had gone viral leading to netizens making memes on all the “Kudrati Biryani” that the Shaheen Bagh protestors were enjoying.

Turns out, there was nothing Kudrati about the biryani being served to thousands of anti-CAA protestors at various sites across New Delhi. Thorough investigation by the Special Branch of Delhi Police has revealed how the protests leading up to North-East Delhi riots were financed by Islamists from not just within India but abroad.

Police found that Ishrat Jahan, Khalid Saifi, Tahir Hussain, Sifa-Ur-Rahman and Meeran Haider received a total of Rs 1,61,33,703 out of which they spent Rs 1,48,01,186 in “managing the protest sites as well as to execute the conspiracy hatched for the riots in Delhi.”

Ishrat Jahan received Rs 5,41,000 in the period between December to February. She got Rs 4 lakhs from a Corporation Bank account which was in the name of Mahadev Kaste of Sindhudurg, Maharashtra. When he was interrogated, he revealed that he is the driver of Samir Abdul Sai and he did what his boss asked him to.

Abdul Sai told the Police that he doesn’t know Ishrat Jahan directly and he was asked to wire Rs 10 lakhs to her and others by his business partner Imran Siddiqui who lives in Ghaziabad. “Imran further instructed him not to transfer the money into the account of Ishrat from his own account as the money can be tracked,” the chargesheet says.

Imran is brother-in law of Ishrat Jahan. Moreover, Jahan received another cash deposit of Rs 1,41,000 in her bank account in January, source of which she couldn’t explain to the Police during investigation.

“During investigation, it was found that the accused Ishrat Jahan had used this money to maange the protest sites and in purchasing the weapons through the accused Abdul Khalid, The weapons were used during the riots,” the chargesheet notes.

Abdul Khalid runs a trust and is co-founder of the ‘United Against Hate’ group along with Umar Khalid. Abdul Khalid received Rs 3,41,000 from December to February, Rs 80,000 of which was in the form of cash deposits. He also couldn’t explain the source of this money to the Police.

Khalid’s trust, New Education and Welfare Organisation, also received a sum of Rs 1,80,000 from the NRI account of Naseer Abdul Kareem, who hails from Kerala’s Kannur district and currently lives in Singapore. Khalid withdrew Rs 1,08,000 as cash on 4 February from the trust’s account and transferred Rs 50,000 in his bank account which he spent in managing the Khureji protest site in Delhi as per his own admission.

The most notorious player in the anti-CAA protests and riots saga was Tahir Hussain. He used a number of companies to move his money which finally landed where it was supposed to be: to fund the protests and riots. The chargesheet notes that Hussain “had spent a huge amount of cash, in the running of the protests, mobilising of the people for riots and procuring the materials, which was later used in the riots.”

Hussain’s modus operandi wasn’t simple like others and the Police has drawn up flow charts running in two pages to explain how he went about delivering the money via shell companies. He received a total of Rs 1,31,48,000 and withdrew Rs 1,29,25,500 from December to February.

Further, the Police found that Alumni Association of Jamia Millia Islamia (AAJMI) played an important role in funding protests and riots. The accused Shafi-Ur-Rahman is the president of this association. Between 1 December 2019 to 26 February 2020, AAJMI received Rs 7,60,000 as cash out of which it got Rs 5,55,000 from alumni working in Saudi, UAE, Oman and Qatar but this amount was not deposited in the bank accounts of AAJMI and was spent in funding the anti-CAA protests. During the investigation, Police also seized fake bills of the expenses worth Rs 1,69,554 in the name of AAJMI. “This shows that the accused had tried to cover up his mistakes,” the chargesheet says.

Meeran Haider received Rs 5,63,144 from various people - mostly Bihari Muslims who are working in the Gulf such as Syed Mohammad Kaif (Saudi Arabia), Ali Imam (Saudi Arabia), Dawar Bhai (Qatar), Gulam Haider (Saudi Arabia), Matin (Saudi Arabia) and Parvez Siddiqui (Dubai). Police also recovered cash of Rs 2,33,000 from Haider. “During investigation, it was found that he distributed Rs 2,86,000 to the Muslim community for the purpose of instigation of the riots,” the chargesheet notes.

As they say, follow the money and you will nab the movers and shakers behind the events that seem too extraordinary to be realistic. Delhi Police did. There was nothing Kudrati about the anti-CAA protests. Cops of Delhi Police Crime Branch deserve kudos for meticulously establishing the money trail which proves beyond doubt the real conspirators behind the protests as well as the riots.