NRC Updation May Become A Nationwide Exercise Next Year 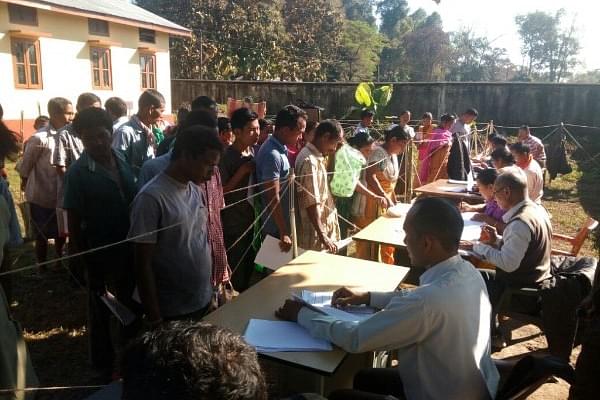 The extension of the National Register of Citizens (NRC) updation exercise, which is now in its final phase in Assam, to the rest of India seems inevitable. With the unwelcome presence of millions of illegal Bangladeshi immigrants (IBIs) all over the country set to become a hot issue in the 2019 Lok Sabha elections, and with many states themselves poised to ask for an NRC update, a massive nationwide exercise on this seems imminent.

An indication of the Bharatiya Janata Party’s (BJP’s) intent to initiate this exercise at the national level comes from the recent speeches of party president Amit Shah, who has been repeatedly proclaiming since August that each IBI will be identified. He said in Chandauli (Uttar Pradesh) in early August that the NRC (update exercise) is a good way to detect IBIs. Two weeks ago, he said in Jaipur that IBIs were “like termites”. In between, too, he has red-flagged the issue of IBIs a few times. Shah is clearly setting the agenda for the polls and also setting the stage for the NRC updation exercise to be undertaken all over the country.

The chief ministers of many BJP-ruled states have spoken in favour of updating the NRC in their respective states. Chief ministers of northeastern states have also spoken in favour of the NRC, with Meghalaya Chief Minister Conrad Sangma being the latest to join their ranks. The powerful and influential students’ unions and civil society bodies in the northeastern states have started demanding Assam-like NRC updation in the rest of the region.

But in order to silence opposition to the much-required exercise by the usual suspects like Trinamool Congress, the Left and the Congress, the states or even non-government bodies like civil society organisations in these states may approach the Supreme Court for a directive to make the NRC updation a nationwide exercise. It is believed that it would be easy to get such an order from the apex court that is now headed by Chief Justice Ranjan Gogoi who had set the NRC ball rolling through his order on December 2014 asking the Government of India to update the NRC in Assam. Justice Gogoi had, since then, been personally monitoring the progress of this exercise.

“With Justice Gogoi as the Chief Justice, the Supreme Court will be favourably inclined to a plea to implement the NRC updation project across the country. Such a petition would also contain a plea to the court to lay down in detail the procedures and formalities for updating the NRC, including the modalities that will be involved, and the constitution of a bench to monitor the progress of the exercise just as is being done in the case of Assam. This is necessary to preempt the possibility of the exercise getting mired in legal wrangles, as could well happen with its opponents mounting legal challenges at every step. And it will also help if the exercise has a strong legal shield that will protect the government and our party from the expected but unfounded allegations of bias, as has happened in the case of Assam,” said a top BJP leader who was a minder of party affairs in the North East earlier.

He, and a few other BJP leaders at the central level, are exploring all routes, including the legal one, of extending the NRC updation exercise to the rest of the country. “This is not just an election issue but one that is of vital importance for the country. The illegal presence of an estimated 2.3 crore Bangladeshis, many of who are radicalised and criminalised, poses a grave security risk to the country. Many in the country don’t realise the serious and long-term implication of this and it is our duty to make all the people of India aware of this serious problem and build public opinion in favour of this proposed exercise that will lead to the identification of such Bangladeshis who have entered India illegally,” said the BJP leader.

There is a strong belief within the top leadership of the BJP that after public opinion across the country is mobilised against the presence of the IBIs and in favour of the NRC updation exercise, the issue will gather a strong momentum on its own that opposition parties won’t be able to resist. The campaign for building public opinion against the presence of IBIs will include naming the Trinamool, the Congress and the Left for turning a blind eye to and even encouraging the illegal entry of millions of Bangladeshis into India over the decades. However, say the BJP leaders, this is not being looked upon only as an election issue meant to garner votes, but, more importantly, as one that is of vital interest to the nation.

“The nation will be in grave danger if the Bangladeshis residing in India illegally are not dealt with immediately. Identifying them is the first step and what we will do with them comes after that. Just their identification will be a big step and will result in many of them returning to their own land (Bangladesh) on their own. Updating the NRC across the country is the best way to identify them since all those left out of the updated NRC will be deemed to be foreigners residing in India illegally. After that comes the question of what we do with them: deport, detain, disenfranchise or any other action. The first vital step is to identify them,” said another senior BJP leader who is also a national secretary of the party.

There are varying estimates on the number of IBIs present in the country. Minister of State for Home Kiren Rijiju informed the Rajya Sabha in November 2016 that an estimated 2 crore IBIs are residing in India. In 2012, then Union Minister of State for Home, Mullappally Ramachandran, had said that 14 lakh Bangladeshis had illegally entered and settled down in India in just one decade from 2001-2011. In May 1997, then Union Home Minister, Inderjit Gupta, had said in Parliament that over 1 crore IBIs were present in India. On 4 July 2004, Minister of State for Home, Sriprakash Jaiswal, had informed Parliament that 1.2 crore IBIs were staying illegally in India and West Bengal had the largest share of 57 lakh IBIs. These figures were all based on extrapolation of census data and electoral rolls. The Union Home Ministry’s latest estimate is that over 2.3 crore IBIs are present in India and an estimated 3 lakh Bangladeshis cross over into India illegally every year through the porous international border.

However, it is said that the Home Ministry’s estimates are conservative and the number of IBIs in the country would be close to 4 crore! “The message needs to go out to the IBIs that they cannot stay on in India as Indian citizens. Potential infiltrators from Bangladesh also need to get the message that India is no longer a country they can simply cross over to, obtain citizenship documents illegally from corrupt officials, and flourish because of the vote-bank seeking politicians. They need to know that they will be identified and will face the heat in India,” said a BJP national general secretary.