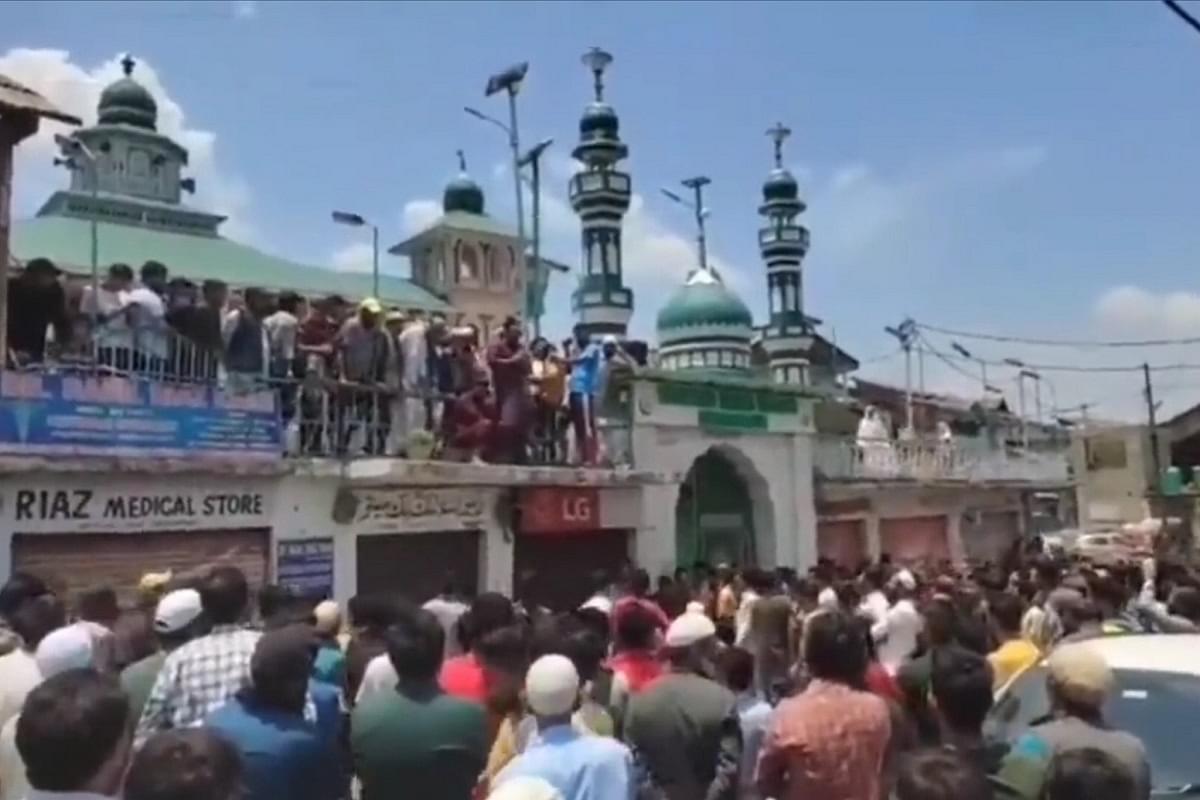 A still of a rally of Islamists in Jammu

Remarks from Nupur Sharma, former spokesperson for the Bharatiya Janata Party (BJP) who was suspended from its primary membership, made over a week ago, ushered violent protests from Islamists across the country earlier today. Pelting stones, attacking security forces, hanging effigies and calling for the rape and beheading of Nupur Sharma, the protesting Islamists are now wanting to act as the judge, jury, and executioner, stating that an FIR against her is not enough.

As a party spokesperson, Sharma’s statement, in a heated debate that went a bit too far and beyond the control of the anchor, can be attributed to the provocation that she was subjected to before she broke into an emotional whataboutery spree.

What she asked her fellow co-panellists was what if she subjected them to the same religious provocation and incitation she was subjected to on the issue of Gyanvapi. Unimpressed about how the Shivalinga was being compared to everything under the sun, was being ridiculed and mocked for fun, Sharma’s emotional breakdown, along with her strong remarks, may have breached the acceptable limits of civility, but on that odd day, she was giving other panelists a dose of their medicine.

Nevertheless, the BJP, as the country’s largest party, did what it had to do-suspend her. After witnessing the repercussions of her remarks, Sharma did what she had to do- withdraw her declaration and issue an apology, which should have been the end, ideally.

Yet, close to ten days later, there are protests across the country, and they are anything but peaceful.

Even if one were to impart the benefit of the doubt to the protesting Islamists pelting stones at police in Prayagraj and calling for the beheading from a mosque in Jammu, what stops these religious stakeholders from taking the legal recourse and reaching out to the courts?

Even if religious sentiments were hurt, and the hurt being subjective here, for mockery of the Shivalinga is freedom of speech and remarks on the Prophet are a call for beheading, are we moving to a precedent where one community chooses to settle such scores on the streets in a violent fashion?

The routine cultural and humanitarian coverup also follows the radical actions on the ground. As was the case in the protests against Citizenship Amendment Act (CAA), the women and children were made the face of the protests to give cover fire to the arson and rioting happening elsewhere. Debates around education and the irrelevance of the hijab in schools are turned into the rights of Muslim girls. There are always human chains to take attention away from the riots against an offensive Facebook post, as was the case in Bengaluru.

The other methodology is to attribute the radical actions to a few Islamists while giving the larger protest a peaceful colour, to get the humanitarians globally on their side. Most subtly, even the voices with a greater stature within the community do not encourage radicals against violence but play the same old Islamophobia card.

Rampaging Islamists have no business in stalling reforms and have no license to take to the streets. The state must come down heavily against this Islamic radicalism that is being sponsored by the likes of PFI, furthered by using children and women as cover fire and is focused on creating unrest and violence in the country.

Nupur Sharma was far from right, even provocative, but nothing compared to the radical Islamists who are a law and order menace. They are a threat to the country, have always been.