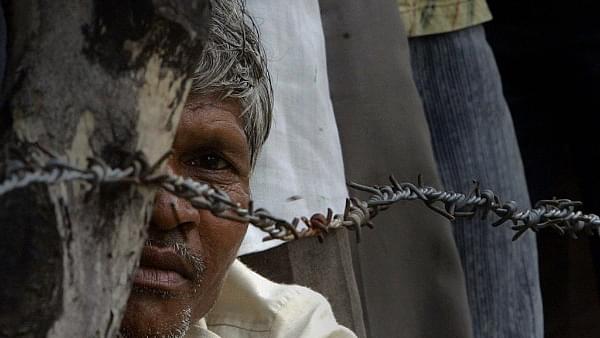 Odisha’s farmers have their backs to the wall. (Rajanish Kakade/Hindustan Times via Getty Images)

An overwhelming majority of Odisha’s population is in dire straits and getting increasingly desperate. Farmers and agricultural workers, who form 70 per cent of the state’s population, are starving and have, thus, flocked to state capital Bhubaneswar to get the state government to agree to their modest demands.

Led by the Navnirman Krushak Sangathan (an adjunct of the reputable Navnirman Samiti), the farmers are demanding fair support prices for their produce, pension for aged farmers and agricultural labourers, and allocation of 20 per cent of the state budget (Rs 21,600 crore) to agriculture and allied sectors.

The farmers are demanding a hike in the minimum support price (MSP) for paddy, from the present Rs 1,550 per quintal to Rs 5,000 per quintal, and old-age pension of Rs 5,000 a month to poor farmers.

Speaking to Swarajya from Bhubaneswar, where he is staging an indefinite dharna, Navnirman Krushak Sangathan (NKS) national convener Akshaya Kumar said Odisha is plagued by farmers’ suicides, declining yields, fragmented land holdings, and apathy towards agriculture. “Industries get fair price and even very high prices for their produce while agriculturists don’t even get the production cost. In Odisha, the cost of production of paddy is Rs 2,344 per quintal, but farmers get only Rs 1,550 per quintal. In 1972, a school peon used to get a salary of Rs 18 per month and his current salary is Rs 18,000 per month, a thousand times increase. But the procurement price of paddy has gone up by only 19 times since 1972. That is grossly unfair,” Kumar said.

The NKS has been spearheading farmers protests for the past 17 years. Last year, it led protests after an estimated 200 farmers committed suicide in Odisha after crop failures in 1.78 lakh hectares spread over nine districts of the state due to infestation by pests. The NKS demanded compensation to bereaved families of farmers who committed suicide, crop insurance, and compensation to farmers who lost their crops. The infestation was due to substandard pesticides supplied to farmers by the state.

Exactly two years before that, more than 50,000 farmers under the banner of the NKS descended in Bhubaneswar for a ‘jail bharo’ programme to demand fair procurement prices and pension for poor, aged farmers. In November 2013, the NKS launched an intense agitation after the state government refused to provide adequate compensation to farmers affected by the cyclone and floods in the state in October 2013.

The desperate farmers of Odisha have also been demanding effective marketing of agricultural produce, provision of quality seeds and fertilisers, setting up of cold storage facilities, and legal status to sharecroppers.

Of Odisha’s total geographical area of 155.71 lakh hectares, the state’s net sown area (or cultivated land) is 56.04 lakh hectares. The state’s economy is primarily an agrarian one with agriculture contributing nearly 30 per cent to the net state domestic product (NSDP). About 73 per cent of the state’s workforce is engaged in agriculture and allied activities, with 44.3 per cent of them being cultivators and 28.7 per cent, agricultural labourers. Though agriculture’s contribution to Odisha’s NSDP has shrunk from 67 per cent in 1951 to 30 per cent now, the percentage of people dependant on agriculture has remained the same. Agricultural yields have declined, as has the average size of holdings, the land-man ratio has worsened, and there has been a spectacular rise in disguised employment or underemployment in this sector.

The per-capita availability of cultivated land was 0.39 hectare in 1950, 0.17 hectare in 1999, 0.14 hectare in 2009, and an estimated 0.10 hectare now. “Such fragmented holdings make cultivation a totally unviable pre-occupation in Odisha. That is also the reason for declining yields,” said a researcher at Utkal University. Since all these marginal and small farmers suffer from “endemic poverty”, they cannot afford to procure high quality seeds, fertilisers, and pesticides, or other agricultural inputs like hiring tractors and threshers and, hence, productivity is very low, admits the latest Status of Agriculture report prepared by the state’s agriculture department.

In addition, due to the rise in landlessness on account of population growth and fragmentation of land holdings among heirs, the percentage of cultivators to agricultural workers (or landless peasants) declined from 57 per cent in 1960 to 44 per cent in 1990, 35 per cent in 2010, and an estimated 31 per cent now. Since the pace of industrialisation, and the subsequent creation of jobs, has been sluggish in Odisha, agriculture continues to be the main source of livelihood for most people in the state. Forced and distressed migration of young men and women to other states for low-yielding occupations like construction labourer is another economic and social problem that Odisha faces.

According to Agricultural Statistics At A Glance 2016, prepared by the Union Ministry of Agriculture & Farmers’ Welfare, the total number of landless peasants and agricultural labourers in Odisha is 67.39 lakh, while land-owning farmers number only 33.75 lakh. The percentage of people below poverty line (BPL category) in Odisha was 32.6 per cent in 2011-12 (the figure has remained static since then), as compared to 8.5 per cent in Punjab, 14.7 per cent in Rajasthan, and 9.2 per cent in Andhra Pradesh.

According to National Crime Records Bureau (NCRB) data, Odisha holds the record for the largest number of suicides by farmers. A total of 1,895 farmers took their lives due to crop failures, unremunerative prices, failure to repay loans, and pressure from extortionist moneylenders between 2005 and 2015. In 2005, 254 farmers committed suicide, while 283 took their own lives in 2006, 240 in 2007, and 260 in 2008. But the actual figures, says the NKS, is higher since the state government tries to pass off suicides due to farm distress and suicides due to marital or family discords. According to NKS, 267 suicides due to farm distress occurred in 2017. The insensitivity of the state government can be judged from the fact that the then agriculture minister, Damodar Rout (he was sacked in December last year for derogatory comments against Brahmins), while responding to NKS demand for compensating families of farmers who committed suicide, callously responded that such compensation would only encourage more farmers to commit suicide! Union Health & Family Welfare data shows that while Odisha has the highest rate of neonatal deaths, almost all such deaths occur among families of marginal farmers and agricultural workers.

The all-India average agricultural productivity was 2,056 kg per hectare in 2015-16, but in Odisha, the average yield is only 1,738 kg per hectare. The total cultivable land covered by irrigation at the all-India level is 51.9 per cent, but in Odisha, a little over 34 per cent of arable land is covered by irrigation, and the rest is dependant on the vagaries of weather. Agricultural productivity is, in fact, declining in Odisha, whereas it is increasing in the rest of the country. In 2013-14, Odisha accounted for 3.56 per cent (8.98 million tonnes) of the country’s total agricultural output while in 2015-16, it fell to 2.61 per cent (6.59 million tonnes).

Poor Support and Other Facilities

Odisha is a coastal state blessed with many rivers and water bodies. But it harvested only 4.69 lakh tonnes of fish in 2015-16 while Bihar (without access to sea) produced 4.94 lakh tonnes, Andhra produced 23.33 lakh tonnes, Bengal harvested 16.32 lakh tonnes, Gujarat’s figure was 8.26 lakh tonnes, and Kerala’s was 6.8 lakh tonnes. In all other parameters, too, Odisha lags behind other states. Its horticulture production is one of the lowest in the country.

“Successive state governments have neglected agriculture. Odisha has been a laggard in bringing land under irrigation, in providing crop insurance, and in providing relief to farmers. Middlemen flourish in this sector and farmers have to resort to distress sales. Indebtedness is rising every year at an alarming pace. Cold storage facilities are few and far between. Corrupt government officials supply poor quality seeds, fertilisers, and pesticides. And money-lenders are allowed to flourish,” said NKS coordinator Akshyay Kumar.

Odisha’s farmers are now desperate and have their backs to the wall. It is do or die battle for them now on the streets of Bhubaneswar.