Out Of Sight, But Not Out Of Mind: Yeddyurappa’s Biggest Nemesis ‘Leaves’ Karnataka For National Role 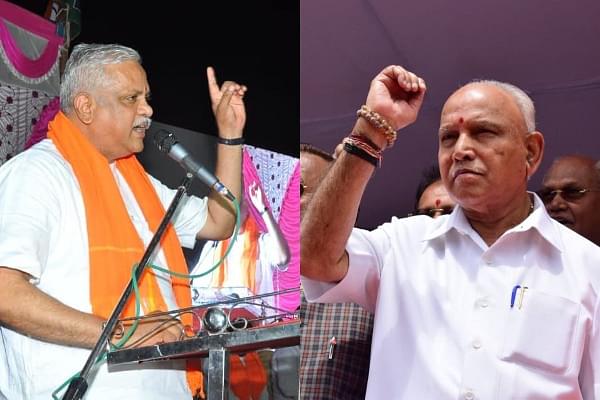 B L Santhosh and B S Yeddyurappa

Amidst all the chaos in Karnataka, a certain faction of the Bharatiya Janata Party’s state unit was in a celebratory mode as B L Santhosh was appointed the party’s national General Secretary. But Lingayat strongman B S Yeddyurappa came across as being uncharacteristically ecstatic with this change and congratulated the leader, expressing ‘his intense joy’.

He sure has reasons to celebrate. Here are a few:

The two men are seen as heading two differing factions within the state BJP unit. To top that, Santhosh’s rising popularity and unblemished image aren’t something Yeddyurappa would like to have to compete with.

Hence, the ‘relocation’ of the RSS bigwig, whose growing power had pitched him as a prospective chief ministerial candidate, comes as a huge relief to the grand old man of the party.

When Yeddyurappa broke away from the party and formed the Karnataka Janata Paksha (KJP), it was Santhosh who sewed the broken morale of the party workers. A Pracharak, Santhosh was first appointed the state organisational secretary in 2006. The party’s victory in 2008 brought Santhosh’s organisational skills to the fore.

So much so that, before Sadananda Gowda became the interim CM in 2011 after certain disagreements within the party, a set of MLAs were said to have teamed up to see Santhosh at the helm of affairs in the state.

Miffed with the lobbying within the party, Santhosh is reportedly said to have warned the MLAs from having any such meetings in the future and that he “will never ever be the chief minister.” Party workers are said to have been admonished by him, saying such efforts ‘tainted his name.’

But it was in 2013 when Yeddyurappa chose to abandon the party and took with him his loyalists, that one saw this new leader truly rise. Santhosh’s hands-on approach of indoctrinating the cadre ideologically and rebuilding the organisation helped the party regain its foothold in Karnataka.

So much so that a large faction yet again began pitching his name against that of Yeddyurappa. Santhosh and Yeddyurappa have been poles apart in terms of their political outlook too, despite having a common background of the Sangh.

While Yeddyurappa’s strength as an individual powerhouse can be estimated from the fact that he is currently the only chief ministerial face the party has in the state (and a second rung most of whom would almost want the coveted position for themselves after Yeddyurappa), Santhosh is a man who clearly declined all such aspirations and believes in ‘the organisational approach’.

“BJP will never be person-centered, it is ideology centred and that ideology is nationalism,” remarked Santhosh, while preparing the party cadre to work for the elections after Yeddyurappa’s act of quitting the party had left a strong dent on the party’s state unit. This had led to the rise of two camps in the party in the state.

The disagreements between the two are also said to have arisen after Yeddyurappa loyalist and presently lone woman BJP MP Shobha Karandlaje was ousted from the party’s state core committee in 2016. Party insiders are rumoured to have hinted at Santhosh’s involvement in the decision.

He has also been vocal about another key player from the former CM’s camp, R Asoka’s role in Karnataka and had expressed discontent over it. He had questioned the former deputy CM’s performance especially after the party failed to both gain seats in Bengaluru during the state Assembly elections as well make any mark in the mayoral polls in the city.

This also had irked Yeddyurappa no end. Party president Amit Shah was said to have intervened and asked the two to stay put until the 2019 election.

While Yeddyurappa has been vocal about all these allegations time and again and made it evident that he doesn’t particularly nurture a fondness for Santhosh, the man of few words that the latter is, he has more often than not refrained from commenting.

Although Yeddyurappa has even accused Santhosh of creating camps within the party, Santhosh has chosen to keep mum, although most of his proteges and ‘supported’ leaders are seen as having an edge over those who owe loyalty to the grand old man of the Karnataka BJP.

Both the young social media savvy MPs of Karnataka, Pratap Simha from Mysore and Tejasvi Surya from Bengaluru South have Santhosh’s backing, and so do many MPs who would have otherwise had to face anti-incumbency this election, if not for the Sangh representative’s support.

To those who wrongly judge the RSS from outside, I request them to meet with people like Sri @blsanthosh Ji once. They are most non judgemental, truly liberal & loving mentors

From professional guidance to deeply personal counsel, he has been there for me.#AbhinandanSanthoshJi

His campaigning approach too was different. While addressing rallies on the one side, he actively focussed on meeting educated, informed and active citizens, and community leaders such as local doctors and teachers, who had been doing work in their respective fields in the interiors of the state, and sought their ‘support’ through ‘interactive programmes’.

Santhosh And The South

Karnataka is the only southern state that gave the BJP 25 out of 27 seats they fought in the state this Lok Sabha election. The BJP dropped a close-catch during the 2018 state elections but the cadre pulled up its socks to ensure they fought anti-incumbency and the negative public perception of many of its MP candidates, to give the party a clean sweep.

In most places, it was the cadre alone that took Modi to people who would else not be determined to vote for the candidates (many incumbent).

In all other states where the party has failed to gain any considerable foothold, it would now look at building its strength, for which, given his record, Santhosh is an obvious choice, also due to the fact that he was also entrusted the responsibility of Kerala (Jana Suraksha Yatra) and Tamil Nadu in the past.

It has been 36 hours since I have been assigned new responsibility by Party leadership & elders ... Many elders & workers have blessed & wished me thruâ tweets ... I thank all & pray god to give me strength to live up to your expectations ... Thank You ..ððð @BJP4India

Well, both the men in white have a lot in common - the Sangh, the strategising, the strength. But while the Safari suit former CM’s political tenure is almost over, the mundu-kurta Pracharak’s march has just begun.