Police Rebuttal Isn’t The Only Problem With Indian Express Report On Tablighi Head’s Audio. It Seems Intended To Misinform And Mislead 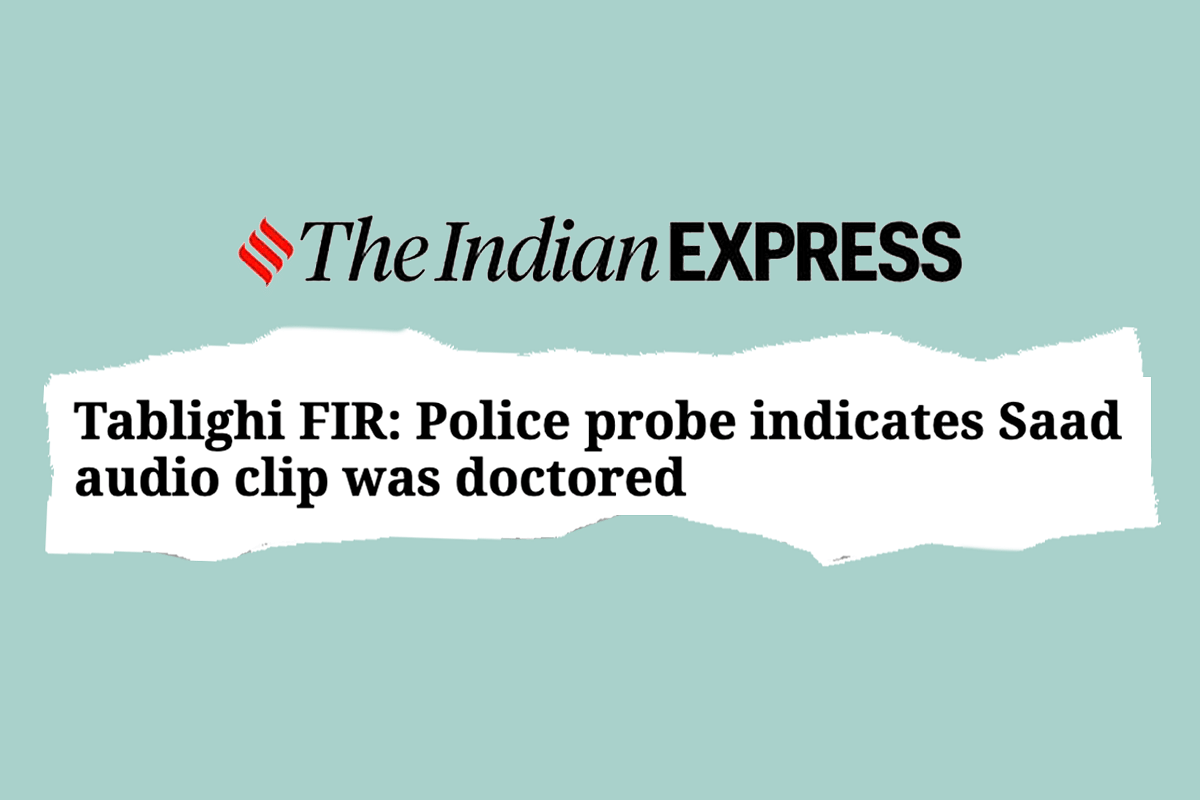 Headline of the Indian Express report

The full speeches of Maulana Saad Kandhalvi given in New Delhi in March, asking his followers to defy social distancing norms, and saying that Covid-19 has been sent by god, are freely available online.

Maulana Saad is chief of the Nizamuddin Markaz faction of the Tablighi Jamaat, an 'Islamic revivalist movement' that is said to be the largest Muslim movement with over 100 crore followers in 214 countries.

While the Indian media (other than Swarajya) almost completely ignored those, three of those speeches were translated and put up on its website on 6 April by the Middle East Media Research Institute (MEMRI), a well-known US-based non-profit media institute that tracks and translates Arabic language content, including the communication from terrorist groups.

Read MEMRI’s report here: Tablighi Jamaat Emir Maulana Mohammad Saad Opposes Social Distancing During Coronavirus Epidemic, Says: 'The Satan Is Using This Opportunity... To Lead Us Astray From Our Religious Duties In The Name Of Precautions, Treatment, And Protection'.

Yet, for three days now, the Internet is full of influential social media accounts telling us that Saad never spoke against social distancing norms and he is, on the contrary, a victim of “doctored” audio clips.

The genesis of this misinformation is a (now disputed) report published in the Indian Express on 9 May. The report headlined "Tablighi FIR: Police probe indicates Saad audio clip was doctored" was published by the newspaper on the front page of its New Delhi edition.

The report quoted unnamed “sources” as saying that an audio clip of Maulana Saad mentioned in the FIR against him, which suggested that he had asked the Jamaat members not to follow social distancing norms and prohibitory orders, is “doctored”.

Given that Saad’s audio speeches and their translations available online clearly reveal that he said this and more, the claim of the said audio clip being “doctored” or not is a moot point.

When presented as a headline, it clearly misleads and misinforms.

The report’s claim itself has been rejected by the Delhi Police officially and publicly.

Before we elaborate on why the Express report was a shoddy piece of journalism if not outright fraud, let’s take a look at the report, the subsequent rejection by the Delhi Police and the newspaper’s response.

An excerpt in the Indian Express report said:

“In the audio clip mentioned in the FIR, a man can be heard saying “there is no need for social distancing as it is not written about in our religion”. “The investigation team noticed that the viral audio is a mix of several clips, which have been edited and doctored. They heard all audio clips again and found that statements from around 20 had been used. Kumar informed his seniors about the development and was asked to send all clips as well as the viral audio to the FSL for further examination,” a source said.”

The same day, the official handle of the Delhi Police called the report “factually incorrect”. The handle tweeted:

“The Indian Express report dated 9.5.20 with an article captioned: Tablighi FIR: Police probe indicates Saad audio clip was doctored - Written by Mahender Manral, is not only factually incorrect but seems to be based on wholly unverified sources and purely conjectural imagination.”

“The claims made by the reporter regarding the investigation are totally baseless. The Delhi Police does not in any way stand by the story of the reporter, nor has he spoken to any official sources claimed in his report.”

To this, the Indian Express carried a note in its 10 May edition saying it “stands by the report”.

“The report is based on conversations with sources and officials aware of the probe against Maulana Saad. Before publication, calls were made to Special CP (Crime) Praveer Ranjan Friday. Also, a message was sent to him seeking his comments on the key points made in the report. No response was received. So the report quoted Ranjan’s comment from April 2: “We have found an audio clip going viral on social media, and are now sending it to forensic experts. We are gathering evidence to substantiate that they went ahead with the event despite warnings by several agencies.” The Indian Express stands by the report.”

In turn, the Delhi Police summoned the newspaper’s city editor and chief reporter through a notice that threatened legal action under IPC section 174.

The concern of the reader however is different. All that he wants to know is this: did Saad tell his followers to defy social distancing norms regarding the pandemic or not?

And here is where the Indian Express report has created unnecessary confusion in the minds of the readers.

One, the term ‘doctored’, menacing as it may sound, does not necessarily mean ‘fake’ or ‘fabricated’.

Any raw audio or video that has been edited before being published, such as by cutting out unnecessary bits, adding logo or subtitles, or introducing background music can be called ‘doctored’.

Two, let’s assume that an audio clip in possession of the Delhi Police is not just ‘doctored’ but outright ‘fabricated’. Does it mean that Saad never spoke against social distancing at all? No. It simply means that that particular clip is not the evidence for Saad’s problematic speeches.

It’s a classic case of using a piece of fake news around an issue to deny all real cases related to it — a standard trick about which this correspondent has written several times.

A journalist with The Times of India, Delhi, Raj Shekhar Jha, also tweeted about the deliberate confusion being created about Saad’s audio clips.

“So much fuss is being created about Saad's audio clips. Since the day an FIR was registered, a set of people have been releasing/uploading doctored audio clips to create confusion and blur the difference with real clips. We have been ignoring and not reporting them... For two days in a row, there were discussions in most reporter whatsapp groups about ignoring and not running two audios as they seemed to be someone else's voice. Sad to see the attempt to create a confusion by miscreants has finally succeeded or has it?” Jha wrote on Twitter.

Three, the report attributes statements by anonymous sources to the Delhi Police and the team handling the case against Saad, without carrying their official version. This is misattribution of quotes and, hence, misinformation.

Four, the context of this report is also important.

Tablighi Jamaat event not only served as a super-spreader of Covid-19, but also a potential source of communal disharmony.

On the one hand, attendees of the Jamaat congregation at Nizamuddin in March have been accused of molesting nurses, harassing doctors, intentionally spitting, and urinating and defecating at the hospital premises.

The Muslim community has attacked policemen enforcing the lockdown as well as healthcare workers. A person was murdered in Uttar Pradesh for criticising the Jamaat, others were attacked for informing the administration about the presence of Jamaat members in the area.

On the other hand, a large number of people have been booked for comments against the Jamaat on social media. A concerted campaign against Hindus in the Islamic countries began, and those using Hindu religious symbols on their shops were targeted for police action.

It would not be an overstatement to say that the Tablighi Jamaat episode harmed the social fabric of the country.

Understandably, Indians are looking to hold Saad — whose speeches arguably played a central role in all of this — accountable.

Given the sensitivity of the matter, it seems odd that a reputed newspaper hurriedly published a report vindicating Saad on such weak grounds and, is standing by it despite the investigating agency’s rebuttal.

The Indian Express report, besides being shoddy, puts a big question mark on the intention of the newspaper and the reporter.

Already, a massive effort seems to be on to cover up the irresponsible behaviour by members of the Tablighi Jamaat amid the lockdown.

The cover up is being done by a section of the media through selective busting of misinformation and by shifting the focus to manufactured narratives of “Islamophobia”.

The same media has not covered Saad’s speeches spewing hate against kafirs and telling his followers to keep gathering in the mosques amid the pandemic.

The Indian Express report has further, and needlessly, muddied the waters.