Post-Pulwama And Pitroda: It Is Time That The Congress Answers A Few Tough Questions 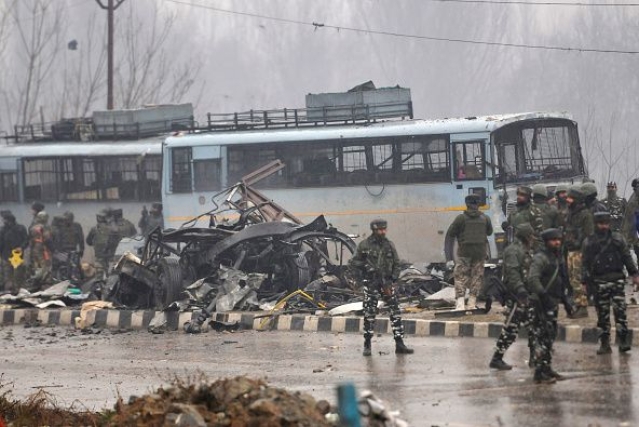 The aftermath of the attack in Pulwama. (Waseem Andrabi/Hindustan Times via GettyImages)

Insults, insinuations and caustic remarks are to be expected in election season and all political parties are guilty of them. But from Sonia Gandhi's “maut ka saudagar” to Imran Masood's threat of chopping Narendra Modi into pieces, election after election in the last two decades has brought out shockers from the Congress party. The party has continued with its diatribe in the run up to the 2019 Lok Sabha elections.

The frustration this time has crossed the realm of political acrimony and targeted the sanctity of the Indian Armed Forces. Ever since the Indian Air Force carried out air strikes in Balakot, Congress leaders have been questioning the veracity of the air strikes and demanding proof of the quantum of damage inflicted in the cross border operation.

Navjot Singh Siddhu mocked the air strikes as having uprooted merely a few trees. Rahul Gandhi fired from the shoulders of the distraught kin of martyrs, demanding information about the casualty figure in the air strikes. Former prime minister Manmohan Singh tried to claim a neutral third party moral high ground by saying he was disturbed at the "mad rush of mutual self-destruction" between the two countries.

Now Sam Pitroda, mentor and guide to Rahul Gandhi, has again called for the number of terrorists killed in the 26 February air strikes. Incidentally, he also criticised the retaliatory strikes stating that the previous United Progressive Alliance government wisely refused to do so after 26/11 Mumbai attack. One wonders why does he want the casualty figures, if the retaliatory strike itself was wrong in his opinion.

A robust democracy demands that an alert opposition keeps questioning the treasury benches. But it is expected that questions are sensible and not sensational or meant to mislead the nation. In the case of repeated questioning of the 2016 surgical strikes and the recent Balakot air strikes, Congress has demonstrated such irresponsibility and recklessness, that now the party itself needs to answer a few questions.

After the victory in three state assembly elections last year, Congress was buoyant. It sensed its chances of returning to power in Delhi. But a slew of announcements in the budget and an ordinance on 10 per cent reservations to the economically weaker of the general category visibly turned the tide. Also, raising the nationalist fervour was the movie #URI which was running to packed houses in city after city and town after town. The cry "How is the Josh!" from the movie had become a national creed. It began unnerving the Congress as was evident from several tweets and statements by Congress party leaders.

Thereafter, Pulwama attack was greeted by Pakistanis and Kashmiri separatists with a contemptuous rejoinder "How is the Jaish!" The nation had turned despondent and there were cries for revenge from all over the country. Had there been no air strikes, the hopelessness and frustration prevailing in the country were a milieu which the Congress could have exploited politically.

Tragic as the Pulwama attack might have been, many would like to believe that the Jaish-e-Mohammed conducted the attack on its own, without the backing of the Pakistani state. But the timing and extent of attack left no doubt that it was also an attempt to influence the coming elections. There is no way to know how many state actors were in the knowhow of the plan. It is amply clear, however, that Pakistan was taking keen interest in Indian Lok Sabha elections.

Back home, the Congress party's conduct before and after the attack has raised a lot of eyebrows. Within a year and a half of the Bharatiya Janata Party government coming to power, Mani Shankar Aiyar sought Pakistan's help on Pakistani soil to remove PM Modi and bring the Congress back to power. The next winter Aiyar again hosted former Pakistani foreign minister Khurshid Mahmud Kasuri at his home. A marathon meeting which lasted three hours was attended by several Congressmen including former prime minister Manmohan Singh. The meeting was first denied by Anand Sharma but later accepted by the same Congress spokesman after former army chief Deepak Kapoor made the details public.

In July 2017 at the height of Doklam standoff, Congress party president Rahul Gandhi met the Chinese envoy. This meeting was also denied initially but later accepted by the party but only after the Chinese themselves divulged the details. The meeting with two Chinese ministers during his purported Kailash Mansarovar yatra in 2018 was also revealed inadvertently much later in January this year, by Rahul Gandhi himself. However at the time of his Kailash yatra, neither the Congress party nor Rahul Gandhi spoke about the meeting.

The conduct of the Congress throws up a lot of questions which they now need to answer.

A 13-member committee of the Pakistan senate had suggested in October 2016, that they exploit "alienated Muslims, Sikhs, Christians and Dalits as well as the growing Maoist insurgency" to reach the Modi baiters in India. The report said "Modi and his RSS ideology of Hindutva should be targeted. Comprehensive outreach to those segments of Indian public opinion which are opposed to Modi's extremism and his anti-Pakistan policies including political parties, media, civil society organisations and human rights groups." We have seen that a lot of marked groups and the Congress Party have toed this line faithfully.

The apprehensions are further strengthened because an entire lobby in the Congress party has been working to give a free pass to Pakistani jihad in India. Digvijay Singh's shenanigans after 26/11, reversing the direction of Samjhauta blasts probe and Chidambaram's desperate foisting of Hindu terror narrative show that Congress is playing into the hands of Islamists not just within India, but probably across the border also. The party is getting regular praise in Pakistani media. Pakistani politicians are desperate to see it back in power. Congress itself has never objected to sympathy and glowing tribute from assorted Pakistani players.

Congress has gone beyond the already repugnant politics of appeasement. By questioning the air strikes, it is now risking its political capital and electoral prospects. It is natural to ask therefore that has the Congress been hijacked by Islamists? Are Gandhis being blackmailed by them?

Domestic politics of sovereign nations, more so during electoral campaigns, has a sanctity of its own. Even remote attempts by foreign players to influence the process cause widespread outrage. The perceived Russian involvement in last US presidential elections had blown into a major scandal, the repercussions of which are still rocking the American discourse. The Pakistani intervention in Indian politics, by contrast, has been direct and brazen. And the oldest political party of India has been shamelessly flirting with Pakistan. It does not care if its calculated cynicism weakens the resolve of a terror bruised country and the morale of the Indian forces.

It is fit, therefore that Congress party answered us, as to which country's national interests does it seek to serve – India or Pakistan?