Prime Minister Modi In Rwanda: Why The Visit Is Important 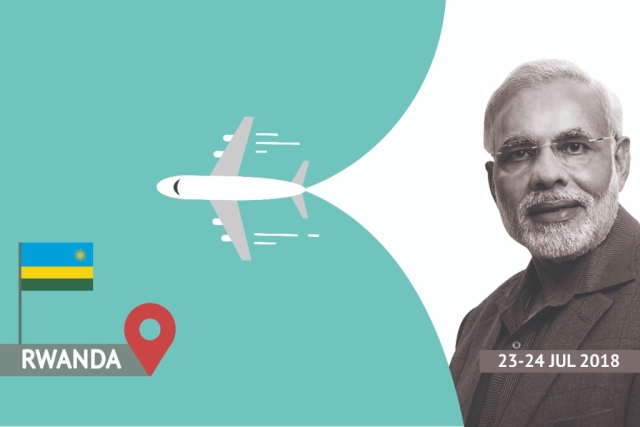 Prime Minister Narendra Modi will be in South Africa for the BRICS summit on 25 and 26 July 2018, but prior to that, he has chosen to visit Rwanda and Uganda, both located in the Great Lakes Region of Central Africa. Uganda is reasonably well known but very few in India know anything about Rwanda except some vague information about a massacre some years ago. As a former commander of the Indian UN Military Observer group in Rwanda in 1994, I feel elated that the PM is visiting this small country, which has risen from the chaos of 1994 to become one of Africa’s model states. Let me share my experience of this fascinating nation and why it may mean much for India in the future. It is of interest to know that President Xi Jinping is preceding Prime Minister Modi by a day at Rwanda. Rare it is to see two such important world leaders visit a tiny African state back to back.

Rwanda was in utter chaos in 1994 when the first contingent of Indian UN Military Observers reached Kigali. I was leading the contingent even as we struggled to find a hotel to stay in. With three to a room, minuscule toilets and only bread, cassava (a staple food crop) and pineapple in the local market, we could not have been more uncomfortable. A kindly Sikh family, which true to reputation did not abandon its truck garage business, fed some of us potatoes, peas and rice but at an astronomical price. What were the reasons which brought Rwanda and its people to their knees? That needs a brief explanation.

It was the typical regional result of the post-Cold War collapse of the international order. A tenuous peace had hung in the region for long due to extreme tribal tension. In Rwanda, the Tutsi tribe at 10 per cent of the composition was in minority while the Hutu was in majority. A Hutu-dominated government in power did nothing to stop the preparation for a potential genocide organised by a rogue Hutu organisation called the Interhamwe, whose leadership perpetrated the killing of the moderate Hutu president Juvenal Habyarimana by shooting down his aircraft as he was on his way back from a peace conference in Arusha, Tanzania, on 6 April 1994. This sparked the civil war in which approximately 800,000 persons, mostly Tutsis, were brutally killed.

The Tutsi Rwandese Patriotic Army (RPA) led by then Major General Paul Kageme, and in exile in Uganda, swept into Rwanda and defeated the majority Hutus and established a government with a moderate Hutu president and Paul Kageme as its vice president. The military campaign led by Kageme was nothing short of brilliant and had it been in any other continent would probably have been studied extensively for its tactical brilliance. Kageme advanced from Ugandan territory, surrounded Hutu defences and mercilessly pounded them with artillery while leaving an avenue for them to escape. He wanted to avoid closing in with the Hutus as it would have led to higher casualties which the minority Tutsis could ill afford.

The small UN peacekeeping force already in place could do little to prevent the genocide of the Tutsis and all its warnings to the UN Security Council for reinforcements in view of the prior intelligence it had about an impending action by the Hutus, were ignored. All this happened in the aftermath of the Black Hawk incident in Somalia in 1993 where the Americans had lost lives in a flare-up with local rebels. Then US president Bill Clinton was not enthusiastic about coming to the assistance of another African state in quick succession after the reverses in Somalia. He later visited Rwanda in 1995 and expressed deep regret and apologised to the people there.

The country Prime Minister Modi has now decided to visit is a prime example of how a nation can bounce back from a seemingly insurmountable setback. Kageme eventually became the President in 2000. Among the major achievements of Rwanda under President Kageme has been women empowerment. About 64 per cent of the Members of Parliament are women with the health and foreign affairs portfolios held by them. There has been a drastic reduction in the maternal mortality rate. Nine out of 10 births now take place under skilled supervision. An all-women’s university has been set up at Kigali, the capital, the first in the region. An information technology hub has been established and with broad band fibre optic cable roll out, there is great emphasis on e-governance.

A 100 per cent enrolment of children in schools is being ensured with 12-year free education to every child. In 2005–2011, Rwanda’s malaria prevalence dropped 85 per cent. About 200,000 families have benefited from the decision to provide at least one cow per poor family to enable nutrition to children. Very appropriately PM Modi is presenting 200 Indian cows to Rwanda as part of his visit. In 2008–2012, Rwanda’s annual gross domestic product growth was 8 per cent on average, extricating more than 1 million people out of poverty. President Kageme has also launched the programme for a laptop for every child with 100,000 children receiving a laptop each. With ban on plastic and compulsory cleaning day on Saturday of all common areas, each earmarked per family, Rwanda has emerged as one of the cleanest countries in Africa, and is thus drawing considerable tourist traffic, which is set to rise further with an expected increase in the population of gorillas.

With a 11 million population and an evolved, committed and honest leadership, Rwanda has emerged as a model state in Africa where foreign investment will not go waste. The visits of the Indian Prime Minister and Chinese President in quick succession before the BRICS summit signifies the potential Rwanda holds to spread the message of development in Africa. If a nation of 9 million such as Israel can become a technological hub and centre for research with vast American support, there is no reason why Rwanda cannot be the next development wonder with support from India and China. China has already moved into the African continent in a big way and intends expanding its Belt & Road Initiative (BRI) to cover Africa. This is an opportunity India must not lose sight of, as it is physically much closer to the continent.

In terms of defence cooperation, even in 1994 the Rwandese Patriotic Army, after its astounding victory, sought participation in the Indian Army’s various training courses. That proposal fructified and Rwandese military personnel, today, often attend a variety of courses in Indian military institutions.

PM Narendra Modi has always selected his international destinations with care. With Rwanda, it’s a spot on decision. The racial tensions related to the 1994 genocide are certainly buried. Politics and pain have led people to move on but locals yet concede that all it will take is one bad leader to reignite tensions again. Attempts to unseat Kageme came to naught when he won the election in 2017 for the third time after amending the constitution to make a third term legal. No one objects to that, even the international community must not, when there is a leader who works zealously for the people and achieves his objectives.

Tribal enmity and tensions in Africa are extremely deep. It is just 24 years since the genocide. Many of those who were involved in the genocide live in exile elsewhere in Africa. In the absence of any serious international effort to book them, Kageme’s Rwanda still remains vulnerable. It is with international support of the kind being extended by India and China that Rwanda can hope to retain stability and look towards becoming the true model African state.

For Indians who look towards Rwanda as a tourist destination there is now a direct air connection between Mumbai and Kigali. The capital city of 1.1 million is akin to the town of Ootacamund in the Nilgiris, the landscape being very similar. There are rolling coffee and tea plantations. The major attraction is the gorilla safaris in the north of the country bordering Uganda, where the gorillas were extensively researched by the famous scientist Diane Fossey before she was murdered there. The famous Hollywood film Gorillas in the Mist is based on her story.