Protest Against Agri Reforms And Wistron Plant Violence Show That India Has Too Little Democracy, And Not ‘Too Much’ 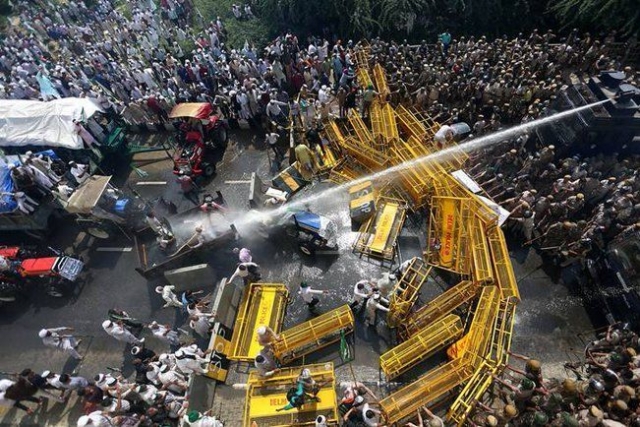 There has been a recent controversy about the state of democracy in India. This controversy was in response to a remark made by a government of India representative while comparing India and China. Indeed, India cannot have the kind of brutal financial suppression as our neighbour can and thus, the comments make a decent job of contrasting the growth models of both these countries.

However, we must recognise that democracy as an institution tends to have a lasting impact on economic growth. That is, while democracies may grow slower at times, over the long-term, constant churn should in principle result in policies that attempt to maximise the welfare of the largest possible people.

Thus, this implies that democracies should in theory result in lower poverty and inequality levels over time as the political process dictates a reversion to welfare which would rebalance societies from time to time — whether that has happened or not is an empirical question and worth exploring in detail.

But the key point here is with regards to China and the institution of democracy. This is a provocative sentence as one mentions China and democracy at the same time — however, we must recognise that China does protect private property and certain individual rights.

At the same time, it does not grant the same kind of political freedom that countries such as India grant.

The reason for this provocative statement is the extent of political freedom that is granted whereby we allow the policymaking process to be hijacked by special interest groups from time to time.

The issue is not the prevalence of special interest groups as they exist everywhere across the world and they do try to influence outcomes.

The issue, however, arises when the special interest groups decide to undertake actions that impose a social cost on others thereby forcing the government to grant them special concessions.

Thus, our policymaking process can be easily subjected to organised extortion even as it comes at the cost of the rights of other citizens.

That is, my right to travel freely in my city can be infringed upon by protesters that decide to stop trains from plying or stop traffic choking the city.

A good example of this is the recent farmers’ protest whereby we have a bunch of rich entitled farmers blocking the borders of the national capital territory of the country.

Protests are a part and parcel of any functional democracy, but the question that arises here is that how would some of the other democratic countries respond to a similar such protest amidst the pandemic?

The fact that our institutions have failed to act to protect individual rights of those that are not protesting shows the extent of weakness that is prevalent towards dealing with such situations which may arise from time to time.

It is equally concerning to note that the protests that are underway are happening under the pretext of farmers even though a majority of the farmers are supporting the new laws.

Evidence in support of this is the fact that India’s ruling dispensation has managed to win in rural areas successively and repeatedly. Therefore, the larger question that arises is of whether we will allow the democratic process to be subverted on the streets of the national capital?

What is occurring in Delhi seems to suggest that there has been a conscious decision by numerous institutions that someone’s political freedom is more important that someone’s right to work, live or eat. Or, in other words, individual rights do not matter unless they are of someone related to political activist or their associates.

Another recent example of the weakness is the developments on a Taiwanese manufacturing company’s plant in Karnataka, whereby labour unions led by goons orchestrated a protest and ended up damaging the plant of the company. The total damages were somewhere in the range of Rs 26-52 crore, however, how were these employees allowed to cause destruction of private property in the name of a protest?

The question that arises here is with regards to the appropriate role of law enforcement in this country which is subject to different kinds of pulls and pressures based on different voter groups. Therefore, laws are selectively enforced adding to overall policy uncertainty.

The lack of strong individual rights that are seldom enforced by our law enforcement agencies has created a system where political freedom is far too much to the point that it encroaches on the individual rights of other citizens.

It is thus important to ask whether this strengthens or weakens democracies. In my view, any political system that fails to establish a rule of law is a weak system and this is why I say that India has too little democracy rather than too much of it.

Greater political freedom of India can be its biggest strength, but only if it is supplemented with strong protection of individual and private property rights. With just the former we cannot build a strong democratic system and both are essential to have a truly rules-based society, whereby institutions are strong enough to act in accordance with the laws of our land.