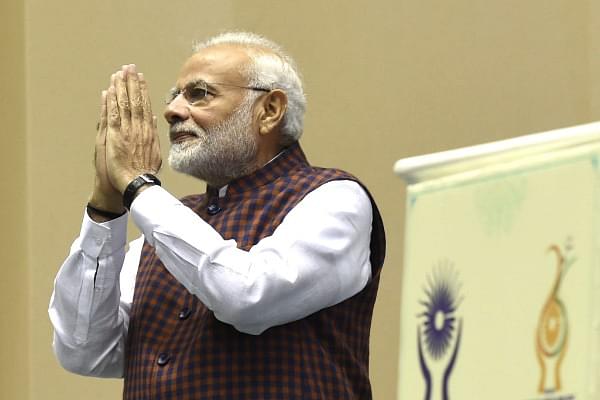 The Modi government’s credibility on its anti-corruption stance has taken a hit despite the many steps it has taken to combat it. (Arvind Yadav/Hindustan Times via Getty Images)

Two big issues, the Rafale deal and the internal war within the Central Bureau of Investigation (CBI), have done serious damage to the Modi government’s credibility on its anti-corruption stance despite the many steps it has taken to combat it.

At the very least, it shows that corruption cannot be stopped through a mere personal crusade, or through bold gambles like demonetisation that grab headlines for a while but ultimately fail to move the needle on societal attitudes towards the menace. It is a pity, for few prime ministers have done more to tackle corruption than Narendra Modi, but all that is now gone down the drain when the institutional mechanisms to sustain the fight are missing. If the CBI is seen as the handmaiden of the government, and given the latest developments, where both Director Alok Verma and his deputy, Special Director Rakesh Asthana, have been asked to proceed on leave pending investigations into their allegations against each other, the conclusion people will come to is that the CBI is itself steeped in corruption. All the good work it may have done in the cases against Karti Chidambaram or the Sarada scam or Lalu Yadav’s fodder thievery may now be seen as pure political vendetta. There is no way the CBI can be seen as independent, as long as the government is seen to be controlling it. Things could get worse if the Supreme Court decides tomorrow (26 October) that the government acted wrongly to send the CBI Director on leave when it needed to get the sanction of the collegium (comprising the Prime Minister, opposition leader and the Chief Justice) to endorse any action against him before his term ends in January 2019.

Ditto for the Rafale deal. It is unlikely that there has been blatant corruption, but throughout the last few months, the government has behaved as though it has something to hide. So, even if there is nothing to hide, or there is just some little embarrassment hidden in the deal somewhere, the Modi government will have lost its moral sheen after making anti-corruption its political theme.

No battle against corruption can be won like this. In fact, making corruption a pure moral fight will end up in defeat, for its roots in society are deep and difficult to separate into neat halves, one good, the other bad. While too much corruption in the body politic can damage growth and society’s moral fibre, trying to defeat it with blunt instruments like demonetisation and unleashing the taxman on black money generators may deliver short-term benefits at the cost of long-term gains.

As an analogy, one can point out that excessive use of broad-spectrum antibiotics may appear to cure a disease in the short-term, but over the long term it will damage the body’s own defences as germs and viruses mutate and learn to survive against antibiotics.

It is the same with corruption. It needs a nuanced approach, not a concerted attack, especially when large sections of society indirectly benefit from it (election spends go to feeding party voter bases, and small bribes paid in government offices help feed lower-middle class officials). Personalisation of the fight against corruption benefited Modi in the short run, but when you do that, even a minor slip becomes a major embarrassment, as we saw when Vijay Mallya, Nirav Modi, and Mehul Choksi flew the coop after diddling Indian banks.

The thing to underscore is that the battle against corruption needs good policies, good economics, and the big stick to be used in the right combination to be successful. An antibiotic kills good cells as well as diseased ones, and long-term health requires one to diet and exercise properly to make even good medicine work well. Medicine alone does not cure. So, when you go after corruption with only a stick in hand, you will do some economic damage.

In 2015, the Modi government launched a scheme to target illegal foreign assets by offering an amnesty scheme with 60 per cent taxation. Few people took the bait, as they could only see the cost of compliance, not the benefit of amnesty. The 2016 amnesty scheme, targeted at domestic black money, achieved better results as the penal provisions were lower, but the Modi government missed an opportunity to raise even larger resources from the pool of black money available to it when it made corruption purely a moral issue rather than an economic one, too. Few people will be tax-complaint if the rates or penalties are too high.

The same mistake was repeated during demonetisation when the Garib Kalyan Yojana was announced with very high tax rates. People took the other option of depositing their money in benami and other accounts, hoping that the taxman will remain corrupt and accept a small bribe to let them escape at a lower cost.

In 2015, we also had the hugely successful telecom and coal mine auctions. Score one for transparency. But with auction prices going sky-high, one wonders if they damaged the industry’s financials at the cost of giving the government a temporary spike in revenues. Auctions are indeed the best way of making the sale of natural resources transparent, but the structure of these auctions ended up offering too few options to bidders, who then went on to bankrupt themselves. Good economic sense would have called for auction structures where the winners don’t end up losing their shirts. The corrective to the United Progressive Alliance’s underpricing of spectrum was not the National Democratic Alliance’s overpricing of the same resource by artificially induced scarcity.

We cannot fault the Modi government for closing tax loopholes—whether it is the Mauritius, Cyprus, or Singapore investment routes, or the introduction of the goods and services tax (GST). But there is a downside to this as well. When you close avenues for tax evasion, and also clamp down on corruption, you have to expect a negative short-term impact on growth and jobs. Money salted away remains salted away, and money saved on bribes and other forms of corruption takes time to find its way back into the productive parts of the economy.

Corruption has two sides to it: there is, of course, the moral side, but there is also the economic side. Black money is not money with some other colour coated on its outside; it is the same money, but which is undeclared to the taxman, on which taxes aren’t paid. Free floating black money thus has the same positive impact on consumption and growth as tax-paid money; in fact, one can argue, that money in government hands is often spent less efficiently than money left in private hands, whether white or black. So, if there is a sudden and artificial clamp on tax-evaded funds, it will impact short-term growth and jobs.

This is exactly what has happened, but we are looking for explanations elsewhere.

Modi’s misstep in making anti-corruption a purely morality play is costing him now. It will help the economy later, but, as he surely would know, in the long-term, he may not be at the helm to receive the voter’s applause. Vajpayee found that out in 2004; will Modi discover the same voter fickleness in 2019?