Rahul’s Temple Run: Gujarat Turns Gandhi Into A Bhakt; BJP’s Counter Should Be To Put His Skin In The Game 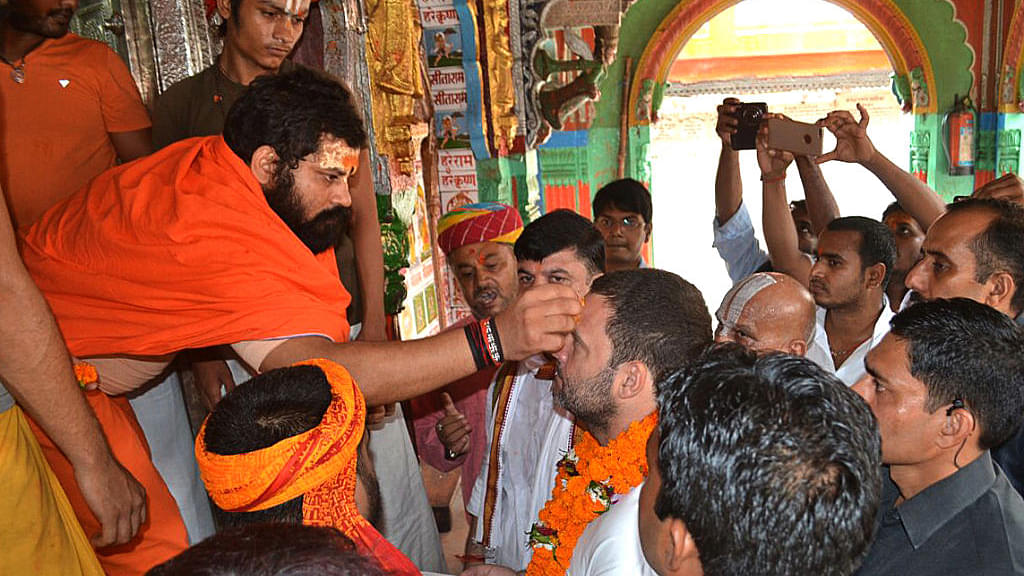 Rahul Gandhi’s temple run is not new. He tried the same strategy in Uttar Pradesh (UP) as Aman Sharma of Economic Times has reported. However, Sharma points out that unlike UP, where Gandhi also visited Deoband, the Jama Masjid in Moradabad, the Jama Masjid in Allahabad, the Nadwa Madrasa in Lucknow, the Dargahe-Ala Hazrat in Bareilly and the St Joseph Cathedral in Lucknow, he hasn’t visited any Muslim place of worship yet in Gujarat.

However, it is yet to be seen how this sudden blossoming of spirituality in Rahul Gandhi’s soul, that too at very convenient time of elections, will play out electorally. The Bharatiya Janata Party (BJP) is certainly not buying Rahul Gandhi’s spiritual awakening. The party’s national general secretary and Gujarat in-charge Bhupendra Yadav took a shot at Gandhi saying, “Going to mandir should be a ‘swabhavik dharma’ and not a ‘chunavi karma’ for Rahul Gandhi. Why has he never visited the Akshardham Temple in Delhi or the Katyani Temple located in Delhi near his farmhouse.”

Responding to BJP’s attack, Rahul Gandhi said that he was a Shiv bhakt and believes in his truth and the BJP could say whatever it wanted to say. Internet trolls had a field day with his comment, most of them reminding Gandhi that smoking weed and being Shiv bhakt weren’t synonymous with each other.

But satire aside, Rahul’s temple run does point to some serious thinking inside the grand old party. The reality has dawned on the strategists that the party’s image took a great hit during the its decade-long rule. Congress in its pursuit of minority appeasement moved so far away from the centre that even after three years after losing power, it still hasn’t been able to shake the perception as a party of the minorities and for the minorities.

There are two aspects of Congress minority appeasement and its anti-Hindu perception that one needs to discuss. One is based on political rhetoric and second is rooted in discrimination on policy front. Political rhetoric involved creating a bogus bogey of Hindu terror, seconding destroying of Ram Sethu, openly opposing Ram Mandir at Ayodhya, branding anyone communal who dare champion Hindu causes and so on. The United Progressive Alliance’s (UPA’s) actions on policy front were far more extensive and damaging to Hindu interests, especially in education sector where it ended up creating separate legal regimes making government policies highly favourable for minorities. Communal laws like the Right to Education Act established roadblocks for education providers belonging to the majority community while incentivising minority institutions to proliferate. It didn’t stop at that but took it further by setting up sectarian scholarships worth thousands of crores and separate schemes targeted at benefiting minorities alone.

Nothing has changed on policy front even under the present Narendra Modi government. However, as far as political rhetoric is concerned, there is marked shift from the UPA era. Currently, we have a prime minister, who isn’t afraid to wear his religion on his sleeves. He frequents temples throughout the country and abroad, attends aartis in Varanasi, and gifts Bhagawad Gita to foreign dignitaries. His party at present appears to be the sole representative of the majority community. Having said that, the BJP hasn’t set out to correct sectarianism on the policy front yet and thus can best be described as the least anti-Hindu party.

This soft Hindutva approach is certainly working in its favour. After years of remaining on the fringe of Indian politics, it has also managed to get the caste combination right throughout the country. It does way better on the administrative front and there is not even a debate on who is the preferred choice as far as country’s internal and external security is concerned. Congress had everything going for it before 2004. The party was seen as centrist if not pro-Hindu before Sonia Gandhi came along and started aligning her party’s stance with interests of minorities with missionary zeal. In fact in the early 1980s, Indira Gandhi’s Congress was more pro-Hindu than Atal Behari Vajpayee’s BJP.

Of course, all that is now history. And BJP thanks to its unabashedly pro-Hindu rhetoric is running up the score against it. It seems invincible. After ‘suit boot ki sarkar’ charge failed to make any dent, Rahul Gandhi and his advisers think that BJP can only be defeated if Congress starts moving towards the centre and sheds its anti-Hindu image.

Are they right in their assessment? Maybe, maybe not. People will probably laugh at Gandhi and Congress leaders for doing rounds of temples but who is to say they won’t get used to it. Public memory is short. If all voters see competitive religiosity on display by sparring politicians, they will move on and test them on other issues. This is certainly a peril of engaging with your ideological opponents only at the surface level, that is on political rhetoric.

So, how should the BJP deal with this? For starters, the party needs to call Rahul Gandhi’s bluff. It should announce in Parliament that the party will pass constitutional amendment to free temples from control of state governments, repeal 93rd constitutional amendment, repeal sectarian laws like the RTE, amend article 30 (1) and do away with Minority Affairs Ministry, which has become a den of communal public spending. Force Rahul Gandhi and Congress party to respond to these reforms on policy front. Only then we can know whether Gandhi’s change of heart is for real or fake.

Otherwise anyone can wear saffron clothes, claim to be a Shiv bhakt and enter into a temple run competition for votes. Separating the wheat from the chaff requires one to blow the air. The BJP must winnow the field before the voters can’t tell worthless from the worthy.