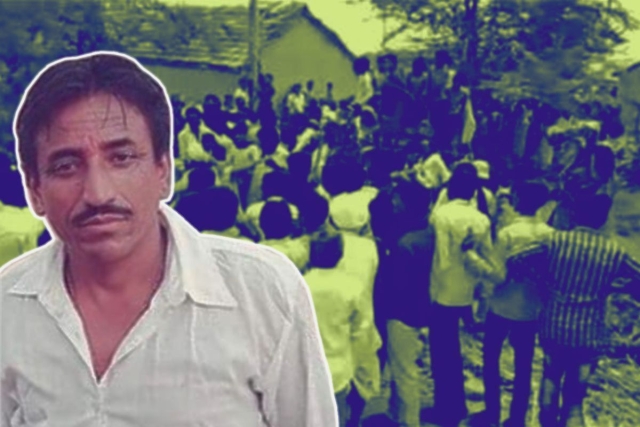 On 4 April, a resident of Madava village in Jaisalmer district of Rajasthan, named Rewat Singh, was allegedly attacked by a group of men from the village’s dominant Muslim community.

The trigger for the attack, as per Singh’s family, was an argument between the two sides on 3 April over Prime Minister Narendra Modi’s call for turning off lights and lighting diyas for nine minutes the next day. Modi had made the appeal to all Indians to “end the darkness and uncertainty emanating from the [coronavirus pandemic] crisis”.

Animosity between the two, Singh‘s family says, began on 22 March itself, on the day of ‘junta curfew’, when Indians clapped and beat utensils on PM Modi’s call.

Here Is An Account Of The Police Investigation So Far

After the attack, a first information report (FIR) was registered on 4 April at Bhaniyana Police Station.

The statement in the FIR (number 0017/2020) by Rewat’s 18-year-old nephew Mahendra, says that around 5 pm on 4 April, three men from the family were out on Jaimla Road to buy grocery. While he and one Narpat Singh were on one bike, Rewat Singh was on another bike.

On the way, three men namely Dildar Khan, Firoze Khan and Iqbal Khan, accosted Rewat and attempted to stop his bike. When Rewat escaped, the three men chased him until he lost balance and fell down. Rewat suffered injuries on his face and feet while his bike was badly damaged. Mahendra and Narpat went after Rewat to save him, but the three men had fled by the time they reached.

The duo called up other villagers and shifted a badly wounded Rewat to a hospital in Pokhran, says the statement.

Rewat, 30, remained in coma for five days before he died on 9 April.

On 10 April, the police handle of Jaisalmer Police, @JaisalmerPolice, posted a statement that one of the accused had been arrested. However, the post made no mention of the physical assault on Rewat.

The next day on 11 April, the handle posted a video statement by Jaisalmer SP Kiran Kang, who said that negligence on the part of Bhaniyana police station in-charge Shankar Lal had come to light.

She said that after probing the case, it emerged that the local police should have invoked IPC section 307 (attempt to murder), but failed to do so.

“Section 307 was subsequently added but even that will now be converted to 302 as the victim has died of the injuries,” she said.

In its latest update on 14 April, the police handle posted that a second accused, Iqbal, had been arrested, and the motorcycle the accused used had also been seized.

How Local Police Tried To Shield The Alleged Killers

The Jaisalmer top cop’s statement on negligence on part of the local police is just half the story. Conversations with the deceased’s family and prominent voices from the area belonging to Rewat Singh’s community reveal that the police acted only after pressure.

Karan Singh, a cousin of Revat Singh, narrated to this correspondent what unfolded between the Singh family and their neighbours on 3 April.

He says that some Muslim neighbours mocked the Singh family on 22 March when they clanged plates and clapped in response to PM Modi’s call. A spat broke out, and it created animosity between the two sides. On 3 April, an argument again broke out over PM Modi’s call for lighting diyas.

“The Muslims barged into our house and challenged us to perform the act. We objected to the way they had entered our house, and told them to respect the lockdown and stay at their home. It turned into an ugly spat. The men threatened us and left,” says Karan.

He says that the village, which is close to a border with Pakistan, is Muslim-dominated.

“The next day, they attacked my brother as part of a planned conspiracy. The situation in the village these days is such that if a person is lying on the road, there is no one to pick him up. The attackers took advantage of this,” he says.

Karan says that the attackers hit Rewat on his head with sticks (the family says they have not received a copy of the post-mortem report yet).

“None of us elders was available to go to the police as we were busy with hospital formalities. Only our nephew went to the police station. We later found out that the FIR skipped the mention of the physical assault. It was an incorrect statement. The sections applied were bailable,” he says.

Karan says it is because of pressure by political and social leaders belonging to the Rajput caste that the case saw intervention of the top cop.

“It is only thanks to our Kshatriya samaj, which put pressure on the police, that the case has been made stronger,” he says.

“Our family is not even looking at the case now. The Kshatriya samaj is handling it.”

Rewat Singh was a dairy farmer, and is survived by his wife and four children. “Rewat was one of four brothers. The eldest one died 10 years ago. The younger is mentally unstable. Our family, which is already poor, is in a crisis now,” he says.

Shaitaan Singh Rathore, a former MLA from Pokhran representing the Bharatiya Janata Party (BJP), told this correspondent over the phone that the police tried to weaken the case because of “pressure from a community”.

“Our Rajput samaj came together and staged protests, and forced the police to correct their mistake,” he says.

Though Karan Singh did not take any names, Hindu and Rajput caste outfits from the area have accused Pokhran MLA and state Cabinet Minister Saleh Mohammad of manipulating the case in the beginning.

Rathore says the Rajput community has demanded the state government to suspend the cop, Shankar Lal.

The cop has been sent to the Lines for carelessness, says a 10 April report by The Times of India.

The same day, on 10 April, Union Jal Shakti Minister Gajendra Singh Shekhawat posted a series of tweets on the case.

He said that the state government (led by Congress’s Ashok Gehlot) did not take the sensitive matter seriously in the beginning, and the station in-charge filed a “wrong FIR under pressure and with bad intentions”

Shekhawat, who is MP from Jodhpur, said that pressure put on the government got murder charges added to the case.

The minister also announced a personal grant of Rs 1 lakh for the aggrieved family.