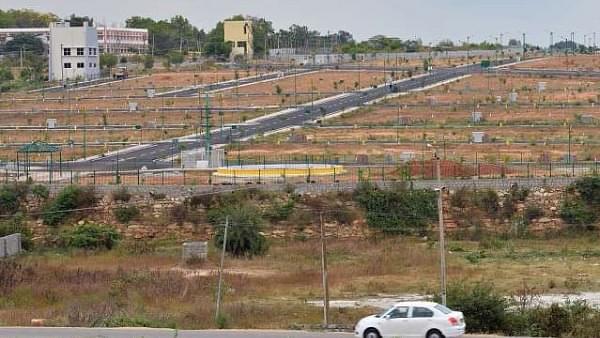 A car drives in front of residential plots on the outskirts of Bengaluru in December 2016. (MANJUNATH KIRAN/AFP/GettyImages)

The powerful real estate lobby is set to rule the roost in the Karnataka Assembly election this time around as well. This is a lobby that has grown strong over the past 15 years following the decline of the liquor lobby in the state.

The real estate lobby, which plays a powerful role in Bengaluru Urban and Bengaluru Rural, made its entry into the political space in three phases. In the late 1990s, when real estate prices in Bengaluru began to skyrocket, a good number of those involved in the sector started backing political parties. The second phase saw them contest elections and, in the final stages, become ministers. The fact is that this lobby cannot be ignored in Bengaluru Urban and Bengaluru Rural, which make up 38 assembly constituencies.

When we speak about the real estate lobby and politics, some of the names that come to mind are D K Shivakumar, the Energy Minister in the Congress government, and K J George, the Bengaluru Development Minister. The other names include real estate baron Krishnappa, a two-time Member of Legislative Assembly (MLA) from Vijaynagar, who was sworn in as a minister in the Siddaramaiah government. His son Priya Krishna, who is also into real estate, made headlines when he declared assets worth Rs 770 crore in 2008. By 2013, the assets declared by him had shot up to Rs 910.99 crore. He remains the richest candidate today. In 2018, the assets declared by him stood at Rs 1,020 crore.

Byrathi Basavaraj of the Congress, who represents the K R Puram constituency, is also part of this list. The 2013 election at K R Puram was known as the fight of the realtors. Basavaraj, who made his political debut in 2013, beat the Bharatiya Janata Party (BJP)’s Nandish Reddy, who is also part of this lobby. Reddy’s assets rose from Rs 38 crore in 2008 to Rs 118.92 crore in 2013.

The other prominent names that control the real estate scene are B G Garudachar, who tried getting into the Rajya Sabha with the BJP’s backing a few years ago, and Satish Reddy of the BJP, who contests from the Bommanahalli constituency.

The Power of Land

When it comes to Shivakumar, there is no ignoring him. An aspirant to the post of chief minister, he has been the go-to man for the Congress. Contesting from the Kanakapura constituency, where land prices have shot up – thanks to its proximity to Bengaluru, Shivakumar was recently assigned the task of protecting Gujarat MLAs from possible poaching ahead of the Rajya Sabha polls.

Shivakumar, recently raided by the Income Tax Department, was one of the richest candidates in 2013 with assets worth Rs 251 crore. Some of the top real estate firms of Bengaluru were shown in his election affidavit as having loaned him money. Back in 2008, his assets were valued at Rs 75 crore. However, in 2018, his asset value shot up to Rs 840 crore. His movable assets are worth Rs 70 crore, while the immovable assets declared come up to Rs 500 crore. The remaining has been shown in the names of his wife and three dependents. Most of the increase has been attributed to an increase in market value in land holdings.

Shivakumar, who has been accused of corruption, continues to enjoy a top slot in the Congress. He has been given powerful portfolios and, owing to his clout, the party has found it next to impossible to drop him. In fact this year, he is the campaign committee chairman.

Justice Santhosh Hegde, the former Lokayukta of Karnataka, said that in present-day elections, money plays an important role. Cash, in particular, comes in handy during poll time. Many who have earned money, aspire to become public leaders. In this background, I see that the realtors too have followed suit. The lobbies tend to work as these are people with money, and these days, it is all about the winnability factor, Justice Hegde says.

The other big name in the list is K J George. Over the past five years, he has been a controversial figure, with his name featuring in the suicide case relating to Deputy Superintendent of Police Ganapathy. He was also criticised over the steel bridge flyover proposal, which threatened to eat into the green cover of Bengaluru. During his stint as the home minister of Karnataka, he has faced criticism several times, but his close association with the Chief Minister has always saved him. He is said to have huge investments in real estate firms and is said to own large tracts of land in Bengaluru. In fact, he is the only real match to Shivakumar in terms of party funding. Despite criticism from all quarters, he was given the important Bengaluru development portfolio after he was dropped as the home minister.

Aam Aadmi Party leader in Karnataka, Prithvi Reddy, who is taking on George, said that the collapse of Bengaluru and the poor regional development of the state is because even those people who win elections from as far as Bidar come to the city, buy land, and become part of the real estate mafia.

To protect their assets, they are not letting the state grow and, in the bargain, Bengaluru is collapsing, he said. He cites the example of M T B Nagraj, the Hosakote MLA, part of the same lobby whose assets have risen from Rs 400 crore to Rs 1,000 crore between 2013 and 2018.

Khenny is also an example of how powerful the real estate lobby is. A committee under the Siddaramaiah government said that he needs to return 1,800 acres of land. It is the same Congress which has now given him a ticket, Prithvi Reddy said.

Land has become a way of parking black money. All the ill-gotten wealth are in land banks today. Funding the Karnataka election started off on a small note by the real estate lobby. However, now the entire election is allegedly funded by this lobby, Reddy said. The induction of M Krishnappa into the Siddaramaiah ministry had taken many by surprise. He is a powerful realtor and represents the Vijayanagar constituency in Bengaluru. He was sworn in as the housing minister in 2016 despite there being allegations of him amassing wealth disproportionate to his known source of income. When Siddaramaiah had gone in for an overhaul of his ministry, Krishnappa’s name was missing. His supporters barged the metro station in Vijayanagar and created a ruckus. Krishnappa, also known as Layout Krishnappa, was finally inducted into the ministry.

Krishnappa and his son Krishna have both been given tickets this year as well. The fact that they were raided by the Lokayukta in 2012 did not have any bearing on the decision-making process. The Congress was unable to overlook the father-son duo owing to the clout they have within the real estate lobby, as well as the fact that they belong to the powerful Vokkaliga community.