Rhetoric And Noise Aside, Why Objections To CAA Have No Legal Merit 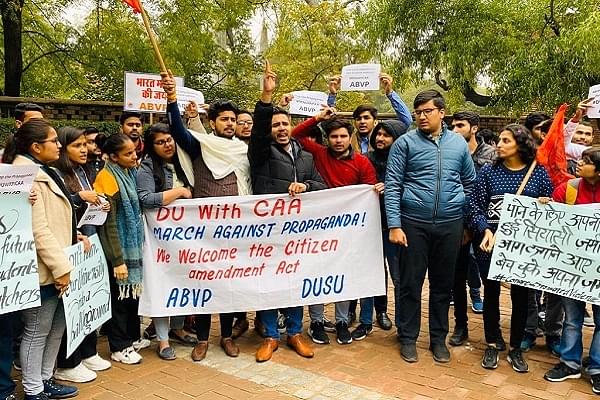 A march in favour of CAA in Delhi. (picture via Twitter).

The Citizenship Amendment Act, 2019 (CAA) has elicited fierce criticism from select quarters. The main argument advanced against CAA is that it discriminates on the basis of religion, and is, therefore, violative of Article 14 of the Constitution of India, which guarantees equality before law and equal protection of law to everybody.

Before examining the validity of the contention, it would be of benefit to have a basic understanding of the legislation in question.

Under the Citizenship Act, 1955, people who are not citizens of India by birth or by descent, may acquire Indian citizenship either by registration or naturalisation, provided such people are not ‘illegal migrants’.

Over the years, thousands and thousands of people from the Islamic countries of Pakistan, Bangladesh and Afghanistan, practising non-Islamic religions, have streamed into India to escape religious persecution and have, since, made India their home.

For the most part, they entered India either without proper travel documents or the travel documents which they had at the time of entering India are no longer valid due to efflux of time, technically making them ‘illegal migrants’.

For a very long time there has been somewhat of a consensus in the public sphere that such people must be granted Indian citizenship to bring a close to their ordeal. But it could not be done on account of the framework envisaged by the Citizenship Act, which precludes ‘illegal migrants’ from acquiring Indian citizenship.

CAA remedies the aforementioned situation by suitably amending the Citizenship Act to exclude people from the Islamic countries of Pakistan, Bangladesh and Afghanistan. They adhere to non-Islamic religions and have entered India prior to a cutoff date, from the purview of the phrase ‘illegal migrant’, paving the way for such persons to apply for Indian citizenship by registration or by naturalisation, if they so choose to.

Regrettably, the CAA has become mired in controversy thanks to an insidious campaign designed to spread misinformation and to misrepresent the legislation. The usual suspects have decried the legislation as communal and divisive, resorting to dangerous rhetoric tailored to stoke fear in a particular religious community.

Many petitions, assailing the validity of the enactment in question, have also been filed before the Supreme Court of India.

Shorn of the rhetoric and the noise, the legal objections against CAA appear to be two-fold.

Firstly, it has been contended that CAA categorises migrants based solely on religion, thereby violating Article 14 of the Constitution. While non-Muslims from select countries, who are living in India illegally, may now acquire Indian citizenship, similarly placed Muslims from the same countries are still precluded from acquiring Indian citizenship.

To my mind, the above noted objection, though appealing at first blush, is, in fact, misconceived. A closer scrutiny of the legislation in question would at once reveal that the parameter based whereupon migrants are categorised by the enactment is not the religious identity of the migrants, but vulnerability to persecution or the fear of persecution based on religious identity.

Pakistan, Afghanistan and Bangladesh are Islamic countries with documented records of brutal persecution of non-Islamic religious minorities at the hands of state and/or non-state actors. This has led to a continuous migration of population from the said countries into India over the years, often without proper travel documents.

There is a mountain of cold hard evidence out there to demonstrate that people belonging to non-Islamic faiths in the countries concerned have been subjected to routine suppression and systematic denial of religious liberties, driving them out and leading to sharp declines in their populations.

Clearly, the first objection advanced by the opponents of CAA is without substance.

The second objection raised against CAA is that if the intention behind the legislation was to give citizenship to migrants, who have taken shelter in India to escape religious persecution in their home countries, the legislation ought to have included all persecuted religious minorities from all countries within its fold.

Instead, it is argued, CAA arbitrarily confines itself only to a set of migrants from a set of countries, which is also a violation of Article 14 of the Constitution.

Once again, the objection, though attractive superficially, is misconceived and devoid of any legal merit.

A distinction has to be made between the worthy and the legal. While it may arguably be a worthy goal to have in place a legal framework under which persecuted religious minorities from any country may be provided refuge and may ultimately be able to become citizens of India, it is hardly a constitutional mandate.

Perhaps an Ahmadiyya Muslim from Pakistan, driven to India by the routine discrimination faced by his community in Pakistan, who has made India his home, deserves a chance to leave behind his previous life for good and become a citizen of India. But the fact that Parliament of India has, for the moment, denied him that chance under the framework envisaged by CAA, does not render CAA illegal or unconstitutional.

CAA, at worst, is guilty of under inclusion, which is not fatal to a legislative enactment under the Constitution of India.

The Supreme Court has in a catena of cases (Heena Kausar vs Competent Authority; State of Gujarat vs Shri Ambica Mills Limited; Superintendent and Remembrancer of Legal Affairs, West Bengal vs Girish Kumar Navalakha) held that under inclusion does not by itself render a legislation unconstitutional.

The legislature is at liberty to recognise parts of a problem or degrees of wrong and strike where it thinks the problem is most pressing or acute.

As such, Parliament is completely within its rights to, at first, select a set of migrants from a set of countries, who have migrated to India to escape from religion-based persecution, and make appropriate changes in the legal framework so that such migrants may be able to become Indian citizens.

The fact that there may be other migrants, who may also have fled to India to escape religion-based persecution, but, for the moment, have been overlooked, does not render the law enacted by Parliament unconstitutional.

In light of the aforesaid, it is absolutely crystal clear that CAA is not unconstitutional or violative of Article 14 of the Constitution.

It is, as a matter of fact, a laudatory step, which, undoubtedly, shall provide succor to a large number of people, who, torn from their roots, took shelter in this country and made it their own. But they have, for a very long time, waited for this country to make them its own.