Rohingyas In India: What Does The Law Say, And In Whose Favour? 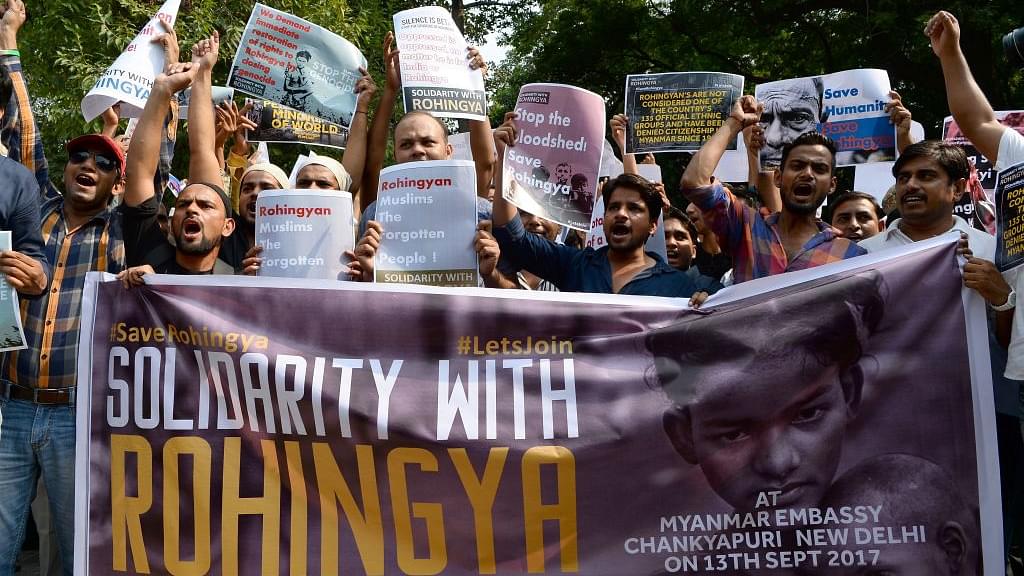 Indian demonstrators shout slogans as they take part in a protest against the treatment of Rohingya Muslims in Myanmar, as they try to march towards Myanmar embassy in New Delhi on September 13, 2017. (SAJJAD HUSSAIN/AFP/Getty Images)

An analysis of the law on the matter is, therefore, in order.

The main question is whether or not does the proposed deportation of Rohingyas infringe upon some fundamental right conferred upon the latter by the Constitution.

In the case of Mr Louis De Raedt and others versus Union of India and others [1991 AIR 1886], the apex court, relying upon the law laid down by a five-judge bench in the case of Hans Muller of Nurenberg versus Superintendent, Presidency Jail, Calcutta and others [1955 AIR 367], held that “the fundamental right of the foreigner is confined to Article 21 for life and liberty and does not include the right to reside and settle in this country, as mentioned in Article 19 (1) (e), which is applicable only to the citizens of this country.”

The Supreme Court further held that “the power of the government to expel foreigners is absolute and unlimited and there is no provision in the Constitution fettering this discretion”.

Therefore, it would appear that the deportation of foreigners (persons who are not citizens of India) by the government does not violate any fundamental right bestowed upon these individuals by the Constitution.

There is, however, a counter argument, which invokes the principle of nonrefoulement, enunciated by the 1951 Convention on Status of Refugees, in its support.

The principle of nonrefoulement prohibits the states, which have ratified the 1951 Convention, from expelling or returning a refugee to territories where his life or freedom would be threatened.

The proponents contend that the principle of non-refoulement constitutes international customary law which India is bound to follow notwithstanding the fact that it has not ratified the 1951 Convention. The proponents further argue that in light of Article 51 (c) of the Constitution, which enjoins upon the Indian State the duty to the foster respect for international law, the principle of non-refoulement must be taken to be part of Article 21 of the Constitution.

Hence, the proposed deportation violates the fundamental right to life guaranteed by Article 21 and must be prevented.

The Supreme Court has, time and again, held that rules of customary international law and treaty law are deemed to be incorporated in municipal law, only if they are not inconsistent with municipal law. The municipal law as regards right against deportation was declared by the Supreme Court in the cases of Mr Louis De Raedt and Hans Muller of Nurenberg as mentioned above.

The Court held that foreigners have no fundamental right to reside and settle in India and that the government’s power to expel foreigners is absolute and unlimited.

Thus, it would appear that the principle of non-refoulement is inconsistent with municipal law and cannot become part of municipal law except by way of legislation.

However, even if one were to assume that the principle of non-refoulement is deemed to be incorporated in municipal law, arguing without conceding, the same would not shut the door on the proposed deportation of Rohingya refugees.

The government, reportedly, has reasons to believe that Rohingyas can be used by terror groups to give shape to their diabolical designs. Without going into the merits of that contention, if the government does indeed have reason to believe so, the proposed deportation of Rohingyas cannot be faulted with.

To the contrary, the government, under such circumstances, would owe it to the citizens of the country. The Preamble to the Constitution, which is regarded as the key to the Constitution, clearly states that the people of India have given themselves the Constitution to secure to all the “citizens” of India, justice, liberty, equality and fraternity.

If the national security of the country is allowed to be compromised, the constitutional ideals cannot be secured to the citizens of the country, and the Constitution would be reduced to nothing but a dead letter.