SC Verdict In Akhila Case Is A Lesson For Hindus: Love Jihad Is Not Going To Get Them Anywhere 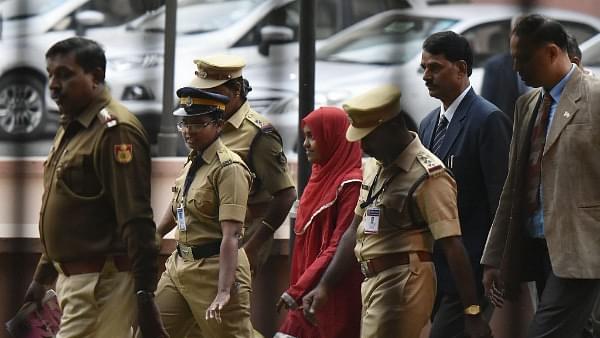 The 24-year-old Hadiya alias Akhila (in red dress) at the Supreme Court after hearing in New Delhi. (Vipin Kumar/Hindustan Times via Getty Images)

The Supreme Court’s decision in the Akhila/Hadiya case, that courts cannot go into the “reasonableness” of an individual’s choice of marriage partner, is nothing more than a restatement of a Constitutional principle. In the immediate case, Akhila gets to live with her “chosen” husband, Shafin Jahan, a marriage that was annulled by the Kerala High Court on grounds that she may have been unduly influenced in her decision.

For Hindu (and some church) groups that see love jihad in marriages that result in a conversion to Islam, this should be a wake-up call on two fronts: one, chasing the love jihad angle will – even if there is occasional vindication – just as frequently lead to embarrassing defeats in courts; and, two, refusing to separate what is visible on the surface from the subterranean asymmetries that drive conversions will prevent them from truly understanding what is happening on the ground and take remedial measures.

We need to be clear on two more issues: love jihad, even if it exists, will remain the pursuit of a Muslim fringe, not the mainstream. It is the mainstream approach of “moderate Islam” to such unions that one needs to worry about. Failure to understand this aspect of mainstream Islam can result in further adverse changes to Hindu demography in states like Kerala, Assam, and Jammu and Kashmir. Shouting hoarse about fringe groups which try to practise a patriarchal form of love jihad amounts to chasing a red herring.

“Love jihad”, to the extent that it exists, is narrowly defined as Muslim men ensnaring Hindu (or Christian) women – and no idea can be more patriarchal than this. If Muslims seriously were into love jihad, they would try conversions the other way around: set up women to snare men from other faiths. This is more feasible given the evolutionary reality that women are, on average, selective than men when choosing mates, and logically it should be easier to attract men and then seek to convert them than the other way around. That this isn’t quite the case shows that love jihad is not what it is made out to be. The time to worry about love jihad is when scores of Muslim women are pushed into the game, but I am willing to bet that Muslim women will be smart, and refuse to sacrifice their relationships just because some jihadi groups demand it.

Another point worth making is that adolescent defiance of parents is to be expected sometimes, since our children react to how they see us as parents. If Akhila’s father was an atheist, and, possibly, an authoritarian figure in her life, one can almost see her do something to hurt him by her actions. Remember, one of Gandhi’s sons became a Muslim, hurting Gandhi no end.

At the other end of the spectrum, a liberal and tolerant parent may also end up with the same result, since some children need more guidance and firm handling, and the lack of ideological or religious mooring may be disorienting to them. Once again, they may choose to find an answer in a totalitarian religion. The short point is that there can be many reasons why some (a microscopic minority) of our children, despite authoritarian or tolerant upbringing, find something else attractive, if only for a while.

So, the first truth we need to internalise is that conversions like that of Akhila are unavoidable on the margins. You can never know which individual will find what idea attractive for what personal, pathological reason. If a Bhagat Singh can, in his early 20s, be infatuated with a totalitarian ideology like Leninism, why is it unusual for an Akhila to be attracted to another form of totalitarianism like Islam? It is only her life’s experience with Shafin Jahan that may convince her that she may have made a mistake.

If Hindu organisations thus raise love jihad to a war cry, they are likely to face defeat. Worse, it is a needless distraction, something that prevents us from understanding the wider problem with Islam, and what needs to be done to inoculate ourselves and our children from it. To come to grips with the issue, we need to understand mainstream Islam, and not only the fringe that may want to join Islamic State.

Starting with the basics, both Christianity and Islam deem conversion as core to their faith. If you are Christian or Muslim, it is part of your duty to get others into the fold. Ayaan Hirsi Ali, an Islamic apostate and liberal thinker, in her monograph on The Challenge of Dawa, says that “the term ‘dawa’ refers to activities carried out by Islamists to win adherents and enlist them in a campaign to impose sharia law on all societies. Dawa is not the Islamic equivalent of religious proselytising, although it is often disguised as such by blending humanitarian activities with subversive political activities… Dawa as practiced by radical Islamists employs a wide range of mechanisms to advance their goal of imposing Islamic law (sharia) on society. This includes proselytising but extends beyond that. In Western countries, dawa aims both to convert non-Muslims to political Islam and to instill Islamist views in existing Muslims. The ultimate goal of dawa is to destroy the political institutions of a free society and replace them with the rule of sharia law.”

We don’t need to take such a drastic view of Indian Islam, but, at the same time, we need to understand why Islam has been so successful in expanding its demographic through normal inter-marriages. Once critical mass is reached in terms of numbers, the radicals can then ensure Islamic dominance in a geography.

Nassim Nicholas Taleb, in his latest book, Skin In The Game, talks about life’s asymmetries and how the most intolerant tend to win. It takes only a small minority of uncompromising people to make its preferences dominant, as long as the majority is not unduly inconvenienced by acquiescing. He gives the example of halal meat; Muslims won’t eat non-halal meat, but non-Muslims don’t have objections to it. So, halal meat dominates even if the Muslim community in a country is just 2-3 per cent of the overall population.

Taleb gives the example of Islam and its spread throughout the Middle East, even though Christianity was the dominant religion before the seventh century. Islam benefited from two asymmetries: one, when a non-Muslim man marries a Muslim woman, he has to convert. And the progeny of any inter-faith couple is automatically Muslim in Islamic law. The second asymmetry is intolerance – Islam is a one-way street. All are free to enter, but none can exit, with apostasy being the worst crime in Islam.

With reference to Egypt, Taleb points out how these two asymmetries reduced the Coptic majority to a minority after centuries of inter-marriage. Women who retained their faith after marrying Muslims found their children were Muslim by birth. In the reverse case, of a non-Muslim marrying a Muslim, conversion is compulsory or the marriage is illegal.

It is this asymmetric process, rather than love jihad, that is at work. Islam is both the world’s most patriarchal religion, and also the most keen to covert. It is the slow accretion of Muslim numbers through marriage and the Islamic concept of dawa – which expects Muslims to spread the faith by any means – that result in a big challenge to Hinduism. Christianity can handle this better than Hinduism, for Christianity follows the same idea as Islam in its approach to conversion. All it has given up is violence and extreme coercion to ensure conversion.

I recall a story told to me by a Rashtriya Swayamsevak Sangh (RSS) member, whose day job was working for an Indian company. At the end of a US trip on business, his American (Christian) business partner suddenly popped the question: “You are a good man; why don’t you become a Christian?” (These are not the exact words, but give you a sense of what was asked). The RSS guy apparently told him he was Hindu, to which the American sheepishly replied that his church expected him to expand the faith, and there was no harm in trying. How many Hindus, even when given the opening, will even try to convert others to Hinduism?

The Hindu vulnerability comes from the fact that we don’t indoctrinate (and rightly so) our children as much as Islam or Christianity. We are expected to accept all forms of faith, even non-faith or atheism. This makes it easier for us to accept our partners’ Islamic or Christian faiths, when the reverse is not true. Our partners from Abrahamic religions may never accept Hinduism as equally valid even if they truly love us for what we are. The demographic shift is thus always one way.

Our caste structure and our inability to think strategically on how to retain our numbers and deal with aggressive, expansionist faiths on their own terms is costing us dearly. We need to think more creatively about how to meet the Christo-Islamic challenge than just crying love jihad.