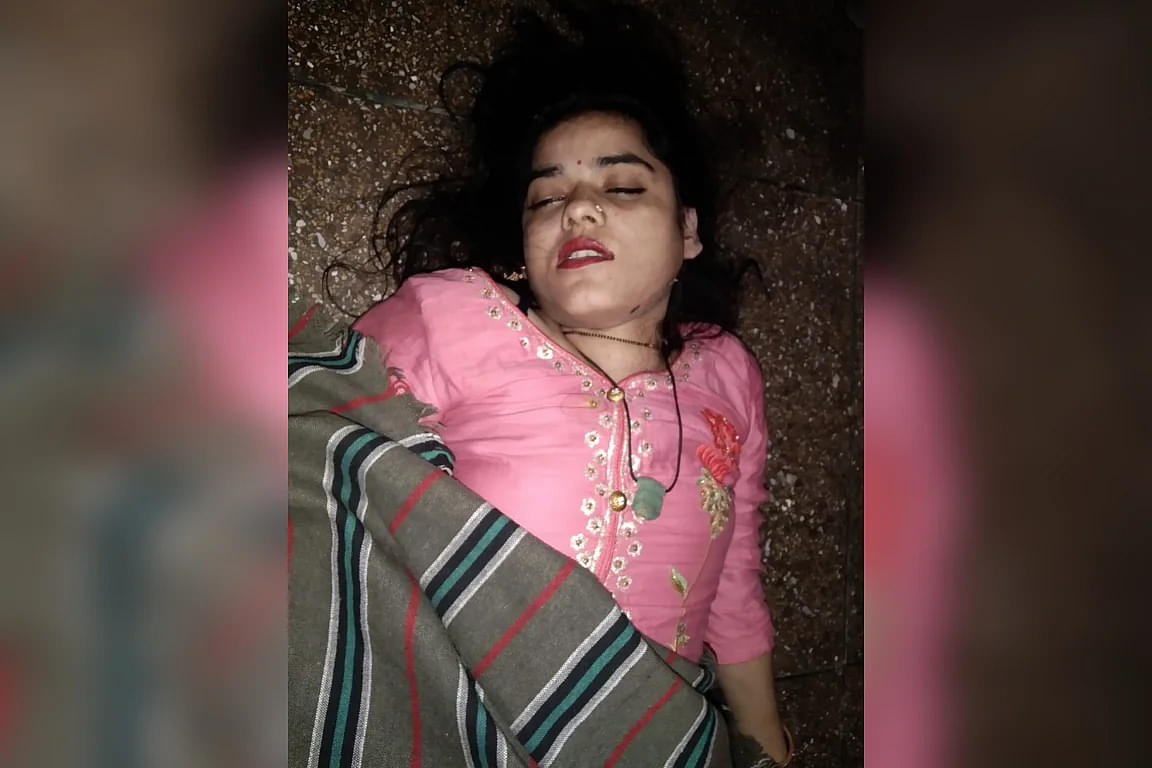 A picture of body of Varsha Raghuvanshi, clicked on 12 November 2021

A district court in Uttar Pradesh has rejected the bail pleas of the father-in-law and the brother-in-law of a Hindu woman who was found dead at her Muslim husband’s house only a year after she eloped and married him.

Besides dowry harassment, the men are facing trial for displaying religious hate towards the woman.

The woman, 25-year-old Varsha Raghuvanshi from Agra, married Faheem Qureshi in 2020, during the first lockdown. In November 2021, her body was found hanging from the ceiling fan at Faheem’s house. The incident prompted protests by Hindutva groups in Agra.

This correspondent published a ground report on the case in November. You can read the report here.

Varsha’s brother Dushyant told Swarajya that time that sometime in March 2020, the family received a letter from a local court, informing them that Varsha had married a man named Faheem Qureshi.

When the members confronted Varsha, she said she had made up her mind and left the house to live with Faheem.

Varsha’s family lived in Kolihai colony while Faheem lived in Chilli Pada colony. Both colonies are in Shahganj area, about two kilometres apart. Faheem’s family hails from Jhansi district and lives in Chilli Pada on rent.

Varsha was found dead on 12 November 2021. Dushyant said it was Faheem’s younger brother Nayeem who informed him through a phone call that his sister had committed suicide by hanging herself.

Dushyant’s statement said that Faheem’s family, including his parents and siblings, began physically assaulting Varsha for various reasons including her Hindu religion.

They would force her to cut, cook and eat meat against her wishes. They would also demand a car and Rs 5 lakh cash from her as dowry. Faheem’s family also insulted Varsha by calling her ‘kaafir ki aulaad’ (child of an infidel) and abusing Hindu deities. All this was disclosed to him by Varsha, Dushyant’s statement said.

The three men were arrested a day after the FIR and continue to be in jail.

On 19 January 2022, the Agra district court heard the bail pleas filed by Nayeem and Kayyum. Faheem has not pleaded bail yet.

The lawyer of Nayeem and Kayyum argued that Faheem had been living separately from the family after his marriage with Varsha and thus had no relationship with them for long, and that the men were not in Agra on the day of Varsha’s death.

The court observed that the case appeared to be serious and hate-inspired (“gambhir” and “ghranit prakriti ka”) and rejected the bail pleas.

Read excerpts from the court order below:

Varsha is one of four sisters of Dushyant. Her father passed away about two years ago.

When Dushyant reached Faheem’s house after learning of Varsha’s death, he saw four chairs on top of each other placed on the bed. On the chairs were kept three pillows for additional height to reach the ceiling.

Dushyant, with help of his friends, cremated the body as per Hindu rituals after collecting it from the mortuary, after post-mortem.

Besides Faheem and his family, several protesters were booked by Shahganj police for rioting.

Dushyant told Swarajya that time that “right from the beginning”, Varsha complained of ill-treatment at the hands of Faheem’s family. “While we don’t even use onion or garlic in our food, Varsha was made to clean and cook meat every day. She told us many times she hated doing it,” he said.

He also said that Faheem’s mother would taunt her for “not bringing anything” after marriage.

At Faheem’s house, Varsha was given the name Zoya. Varsha belonged to the Thakur caste.

Varsha’s younger sister Khushboo told Swarajya that Varsha told her that a maulvi visited the house regularly to teach her namaz and Islam. “Varsha said she tried her best, but it was too difficult for her. Any mistake from her side would end up in a thrashing by Faheem,” she said.