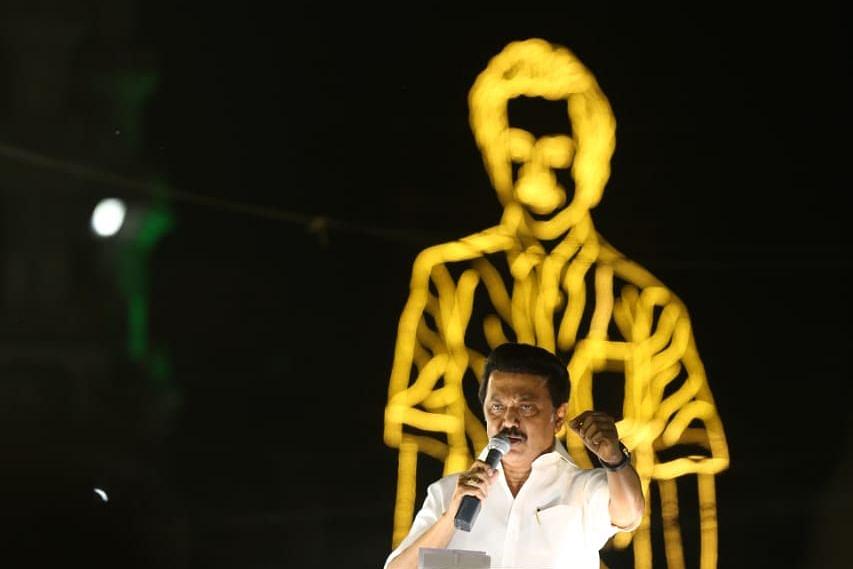 The Dravida Munnetra Kazhagam (DMK), the party that has anchored the political presence of Dravidianism in Tamil Nadu, has now been out of power for two terms. Nevertheless, it has been subject to severe criticism and even mockery by many across social media circles and by opposition parties.

This haranguing of a party that has actually been out of power for ten years is a rather unique phenomenon. Political observers say that the party has had to bat against such criticism mainly because of its rather controversial legacy - of alleged scams and ideological positions.

Here are six key issues that are proving to be a liability for the DMK in the upcoming polls.

During its last tenure in power, the DMK was strongly attacked with widespread allegations of land-grabbing.

When former Tamil Nadu Chief Minister Jayalalithaa spoke of how the then DMK ministers colluded with anti-social elements to get involved in land-grab operations, she was said to be expressing the sentiments of countless victims of DMK land-grabbing atrocities.

She had pointed out how fake documents were prepared to grab away any property that the DMK fancied even as the police had to be mute witness with their hands tied. Of the 6000 land grabbing cases filed by ordinary citizens during the DMK rule, only 300 were attended to.

To top it all, even the office of DMK’s official magazine Murasoli has been alleged to be sitting on Panchami land - land allotted for Scheduled Community upliftment.

2. Denial of Quality Education to the Masses

Both in terms of education infrastructure and syllabus, the DMK has seen to it that the public education system in Tamil Nadu has been diluted and downgraded.

The much flaunted ‘Sama cheer Kalvi’ indulged in ideological indoctrination in Tamil textbooks while the Science and Maths curriculum showed abject neglect. The textbooks were filled with bare minimum of the syllabus - mostly like ‘hints for development’ sections rather than lucid explanations for students.

At the same time, most DMK leaders also run private schools with heavy fees meant for the upper classes of the society. This helps DMK in a long-scale time frame.

In many of the affluent schools run by the DMK higher cabal, Hindi is taught. The late Karunanidhi himself boasted once that his grand nephew Dayanidhi Maran was more suited for a central ministry berth because he knew Hindi.

If there is one thing that everyone remembers about the last DMK administration, it is the power cuts. Long power-cuts plagued the state. Not a single district of Tamil Nadu was free of the power cuts and not a single day went without a few hours-long power failure. Even summer nights were no exception.

The family-business based populist move of free televisions and other schemes cut so much into the public exchequer that basic infrastructure maintenance in Tamil Nadu went for a toss.

Recently a video went viral. A body of Christian evangelists were asking their herds to pray for the victory of the DMK. In the speech, they expressed their hope that the DMK would remove the legal restrictions against building proselytising centres in many places where they are today not allowed - obviously because they will destroy communal harmony.

DMK has made all kinds of statements in praise Christian missionaries and conversions. DMK leaders have made it a point to appear on the same dais as evangelist fundamentalists like Mohan C Lazarus, who makes fake predictions and bamboozles people.

Another Christian fundamentalist close to DMK is Jagat Caspar, a Catholic priest who uses Tamil racism to appropriate Tamil Hindu culture. He even justifies sustained abuses of women as being consensual.

During his rule as chief minister, Karunanidhi showed a soft corner for radical Islamic movements. Fundamentalist Islam and pseudo-rationalist racism of DMK have always been complementary, resulting in widespread death and destruction for Hindus in state.

The most notorious instance of this exploded on 14 February 1998 at Coimbatore, killing more than 70 people.

Later too, when the DMK came to power in 2006, it went on a spree of freeing radical Islamist elements arrested and jailed in Tamil Nadu.

This resulted in an increased number of killing not only of Hindu activists but also Muslim women who defined fundamentalist fatwas.

The ideological fountains of DMK have a pathological hatred for Hinduism and Hindus. This often translates into public utterances of uncultured and uncouth statements against Hinduism by several leaders.

Udayanidhi Stalin called Ganesha a ‘clay toy’ and that was the mildest of the statements from the party.

Stalin has termed Hindu marriage mantras as vulgar and obscene.

Kanimozhi made insulting remarks against Venkatachalapathi.

Veeramani, a largely marginal Dravidian activist and a staunch supporter of Stalin, organised a function to cut and remove the mangalsutras of women. Stalin enjoys the support of Veeramani.

In a Christmas function where Stalin was the chief attraction, a fake Saivite woman was brought on stage. She made disparaging remarks about Hinduism without any objection from those on stage.

These are the memories which the DMK may hard to erase or dilute.