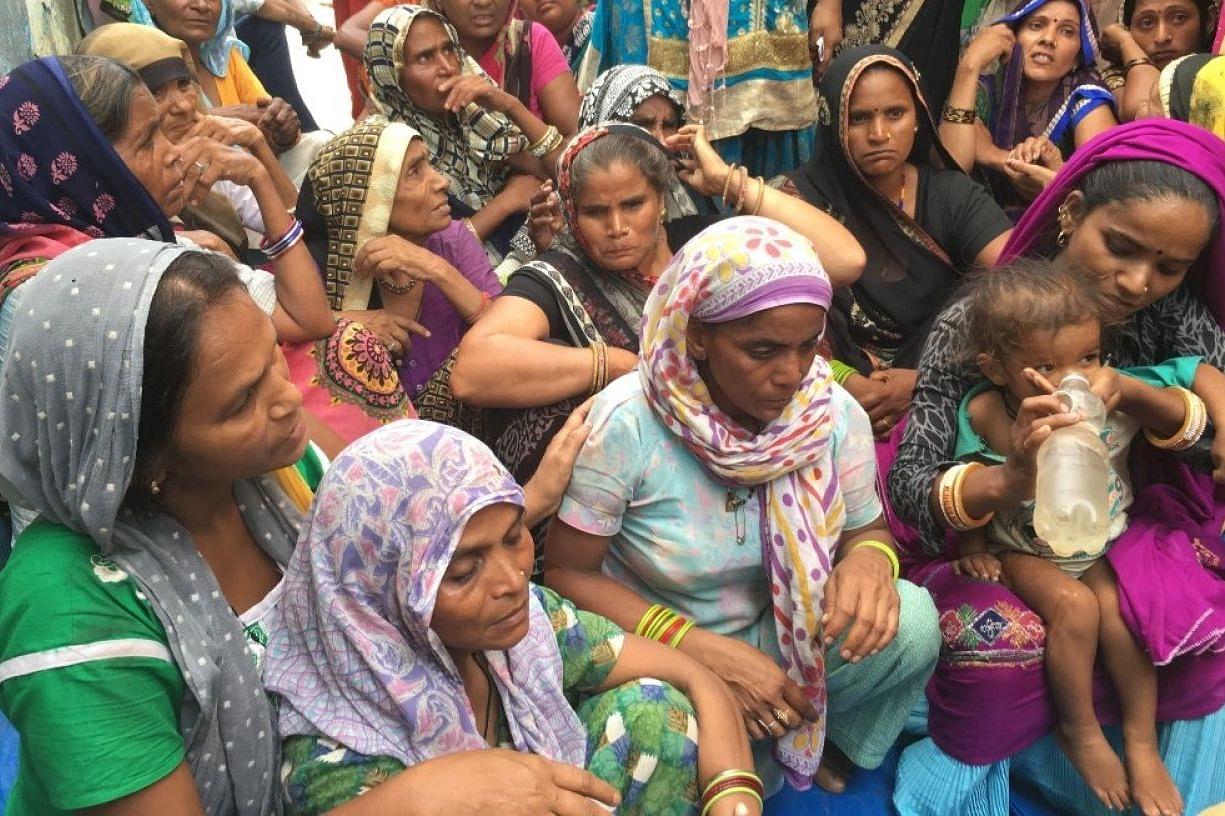 Manju (second from right) in August when Sanjay was killed (Swarajya)

There is a category of hate crimes in India for which neither the establishment media asks the Prime Minister to speak nor the Prime Minister himself spares a word. These are crimes that inspire no campaigns against religious hatred and, let alone inviting outrage, they are even brushed under the carpet with little media coverage.

The brutal murder of 22-year-old Sanjay Kumar at the hands of his wife's family in August, in Haryana's Faridabad district, was one such incident.

Sanjay, a Dalit Hindu, paid the price for marrying a Muslim woman and not succumbing to her family's demand of converting to their religion.

Sanjay, who worked as a labourer, is survived by his mother Manju, a mentally-challenged minor brother and a sister who married five years ago. Today, the small family is struggling not only with a financial crisis but also in their fight for justice for their loved one.

When Swarajya visited the site (Nehru colony) last year, a visibly shattered Manju had said that the local police made her run from one police station to another for three days, for even filing a missing person’s complaint.

Sanjay had gone missing on the evening of 16 August, the first information report (FIR) was filed on 19 August and his decaying body was found in a nearby hilly jungle on 21 August.

About a year before that, Sanjay had eloped with his neighbour Rukhsar (a major), and gone to his grandfather's village in Rajasthan where they got married according to Hindu rituals. The two returned to Faridabad eight months later when Rukhsar, who now called herself Rukmini, got pregnant. As per Manju, Rukhsar's family forced her to abort her five-month-old foetus and return to her parental home. The couple, however, had continued to remain in touch.

As per Manju, Rukhsar’s father Fajruddin Khan and brother Saleem Khan had called up Sanjay on 15 August when he was in Rajasthan, and convinced him to return to the colony so the two sides could settle the matter of the couple's marriage. The next day, Saleem and Fajruddin came to Sanjay’s house on a motorcycle and took him away.

They allegedly took Sanjay to the jungle as planned, committed the crime with help of two men and left his body to rot. An eyewitness named Shehzad Khan had told this correspondent at that time that when the body was being recovered, it was a horrible sight as it was infested with insects.

Swarajya has now accessed the postmortem report of Sanjay's body that suggests shocking cruelty was unleashed on him before he died.

As per two doctors that this correspondent shared the report with, Sanjay was most probably tortured for hours in the most barbaric way.

The doctors said that the signs point to an act of humans, refuting doubts that the mutilation might have been carried out by stray animals after his death.

Since the body was found a week after the murder, it had rotten badly and had maggots crawling all over it. The report said that the scalp missing at various places and gnawing effects were seen all over.

Manju, who cannot read or write and works as a house-help, is not aware of the gory details. She never saw the body. She does not know the case details. For most questions, she draws a blank or breaks down inconsolably.

“I just know that they brought his remains in a plastic bag and sent it to Rohtak," she said when this corespondent visited her this week. Her neighbour Kallo said that after hearing the news of her son's death, Manju “lost her senses” and went into depression. It took her several weeks to gather herself. Manju's married daughter has been living with her since the incident.

Manju's brother Prahlad said he hid those facts from his sister. Manju, a widow for many years, also lost her elder son 10 years ago who died of electric shock.

Prahlad said that for matters relating to the case and for seeking compensation, the family is largely dependent on a local activist who is the most literate in their community. The activist requested this correspondent not to identify him by name. He shared that the family has recently got some financial help under the Scheduled Caste and Scheduled Tribe (Prevention of Atrocities) Act.

The activist told Swarajya that he is not satisfied either with the chargesheet or with the administration, which he says has failed to deliver on their promises.

"The chargesheet does not figure Rukhsar at all. Her statement is crucial but has not been recorded. The police have completely given her a miss. They have instead gone by the accused's statements that they killed Sanjay in revenge for abandoning their daughter. This is a blatant lie. It was they who separated the couple," he said.

The activist said that the sub-divisional magistrate who visited the family in August promised a government job for a family member but has not delivered on it. He rued that neither the state government nor the local MLA has helped the family monetarily.

The activist has also been writing to the administration “to remind them of their promise” of an alternate accommodation for Manju. "She is the complainant in the case and is just not safe here," he said.

He said that after the incident, locals arranged for Manju to live in a local temple as she had been finding it difficult to pay the rent for her room. Manju lived in the temple for about six months but had to vacate it two weeks ago. She has since rented another room but fears for her safety.

She told this correspondent that at times, she has heard men walking past her house around midnight whispering that it's a matter of time when the accused would get bail. She said that some days ago, she got a call from a stranger who refused to reveal his identity but asked her to come to the police station for "compromise". Manju shared the number with this correspondent.

"Earlier, Fajru's mother has come to me asking for compromise. But I can’t agree to that. I want her son to meet the same fate as my son," said Manju.

In August, the neighbours had told this correspondent that though Rukhsar’s family never liked Sanjay to begin with, they would have accepted him had he converted to their religion - a condition that Sanjay’s maternal uncles did not agree to. A neighbour named Sunita had told this correspondent that when Rukhsar’s family got the couple separated, her mother Madina would say in her community gatherings that she had saved her daughter from “being cremated”, that is, dying a Hindu.

Sunita had told Swarajya [in a recorded statement], "When they have their community gatherings, we also sometimes sit and listen in the conversations. Madina often said that she has managed to save her daughter from being cremated. You know, they get buried and we get cremated in shamshan grounds.”

Six months on, a distraught Manju says she wished Madina or Fajurddin had talked to her directly. “I would have forced my son to do it [convert to Islam],” she says.

“At least his life could have been saved.”

(Madhur Sharma assisted in the reporting)