Suspicion, Sycophancy And Shaming: The Triple ‘S’ Factor That Is Forcing Dinesh Trivedi And Others To Leave Trinamool 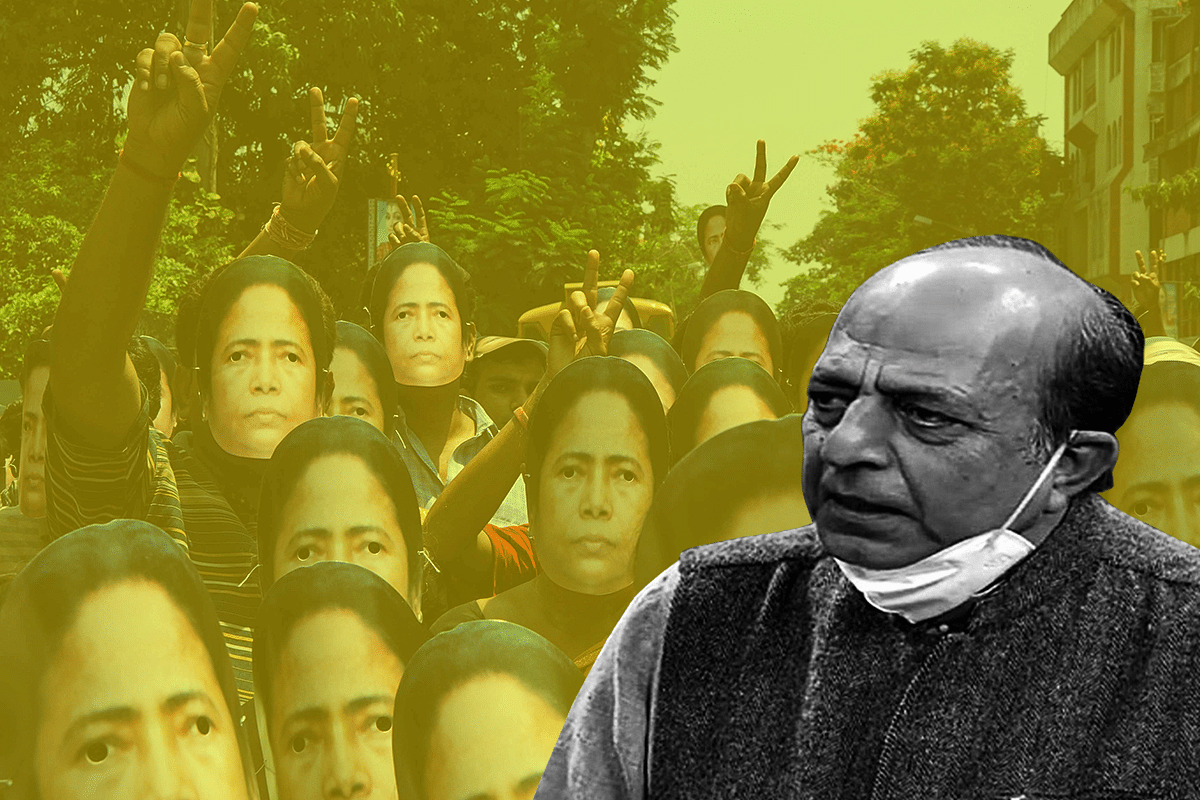 Dinesh Trivedi is the latest in the line of senior leaders to quit the TMC.

The dramatic resignation of senior Trinamool Member of Parliament and former railway minister, Dinesh Trivedi, on the floor of the Rajya Sabha last week has laid bare the environment in the Trinamool that has been forcing many veteran leaders to exit the party.

Trivedi’s was not the first exit, and nor will it be the last.

Many top leaders of the party that Mamata Banerjee founded in 1998 after breaking away from the Congress have left the party.

But Trivedi’s exit stands apart from those of most others. He was elected to the Rajya Sabha on a Trinamool ticket in April last year and his term would have expired only in April 2026.

Also, Trivedi is looked upon as a sober and soft-spoken person and one of the few urbane and refined men within the Trinamool. Most importantly, the 70-year-old Trivedi is not a career politician and not very politically ambitious either.

Trivedi has had a chequered career in the Trinamool, of which he was one of the founding members and also its first general secretary.

Like many others in the party, he has had to swallow many insults, one of the most public being his removal from the railway minister's post in March 2012, days after presenting the railway budget.

Trivedi succeeded Banerjee to the railway minister’s post after the Trinamool won the Bengal assembly polls and she became the Chief Minister. Trivedi, in his railway budget, hiked passenger fares.

That triggered an angry reaction from the populist Banerjee who asked Trivedi to step down. Trivedi was replaced by Mukul Roy.

Trivedi was relegated to the sidelines and he kept a low profile. He lost the 2019 Lok Sabha elections to his former protege Arjun Singh, who had left the Trinamool to join the Bharatiya Janata Party (BJP) on the eve of the elections.

According to people close to Trivedi, he was sent to the Rajya Sabha last year because Banerjee felt that she needed a senior politician who had good ties with other parties and politicians at the national level.

But Trivedi was never given his due, and despite outranking other Trinamool Rajya Sabha MPs in seniority, he was not made a leader of the party in the Upper House.

“He was only used by Mamata Banerjee to get her work done in Delhi. The other Trinamool MPs did not have much gravitas and did not have friends in other parties,” said one of Trivedi’s close aides.

Years of humiliation ultimately led Trivedi to leave the party that he had founded.

The humiliation came in many forms: verbal abuses by Banerjee, being mocked by her minions, taunted for his erudition and urbane image, sidelined for not being a sycophant and, of late, dictated to by ‘greenhorns’ (mostly from outside Bengal) who are members of Prashant Kishor’s I-PAC team.

Insults by Banerjee and her intolerance of contrarian or even independent views have rankled many people in the party.

One of the first to quit the party was Pankaj Banerjee in 2006. He was also a founding member of the party and senior to Mamata Banerjee in politics, debuting as an MLA in 1972 when the latter was still cutting her teeth in politics as an activist of the Congress’ students’ wing.

A marine engineer by profession, Pankaj Banerjee became the leader of the opposition when the Trinamool emerged as the largest opposition party in the 2001 assembly elections.

Pankaj Banerjee started gaining prominence as an articulate leader of the opposition and a good debater who effectively put the Left Front government on the mat on a number of occasions.

“That was resented by Mamata Banerjee who wanted to hog all the limelight,” said a veteran leader of the Trinamool who did not want to be named.

“Mamata then started encouraging others to speak out against Pankajda, and started giving important responsibilities to others. Pankajda started feeling sidelined and neglected. Tasks that should have been performed by him as the leader of the opposition were given to others who were junior to him in politics and the party. That hurt him deeply,” said the Trinamool leader.

When Pankaj Banerjee started expressing his resentment, the insults and abuses started. “Didi (Mamata Banerjee) started insulting him in front of others. She rebuked him for no reason many times in the presence of ordinary party workers. He was a self-respecting bhadralok and could not take it anymore,” said the leader who is also a senior office-bearer in the party.

Pankaj Banerjee quit Trinamool in the run-up to the 2006 assembly polls. He passed away a broken man in 2018. Though he never spoke in public about his humiliation in the Trinamool, those close to him told Swarajya that he harboured considerable hurt for the way he was treated.

“He often used to lament that though he was one of the founders of the Trinamool, he was not given his due and was forced to quit the party. He used to talk of the humiliation that was heaped on him. He was deeply hurt, but not bitter. He harboured that sense of hurt till his last days,” said a close relative of his.

Another senior leader who also quit the Trinamool in 2006 was prominent lawyer Arunava Ghosh. A suave and articulate person with a good command of legal and parliamentary matters, Ghosh emerged as the face of the party in the media.

That was unacceptable to Mamata Banerjee who felt that Ghosh was hogging the limelight and had become the darling of the media. She reportedly started instigating others in the party to launch whisper campaigns against Ghosh.

As with Pankaj Banerjee, the insults by Mamata Banerjee started soon after that and it became impossible for Ghosh to continue with the Trinamool. Ghosh joined the Congress.

“Mamata Banerjee is, basically, a very insecure person. On top of that, she is always on a short fuse and exhibits a strong dictatorial streak. She is extremely intolerant of dissent and does not like anyone who speaks his or her mind,” said a psychiatrist, who has studied the Trinamool chief closely.

All this, added the psychiatrist, makes it difficult for any self-respecting person to swallow the insults and remain in the party. “Those who have nothing to gain by continuing in the Trinamool will obviously leave the party. There is a limit to how much a person can take,” said the close associate of Dinesh Trivedi.

According to a few other senior leaders in the Trinamool, Mamata Banerjee deliberately mocks people who she feels threatened by. “In cabinet meetings and at various party fora, she often flies off the handle and insults, mocks or rebukes even senior party colleagues. Most Trinamool leaders, including senior cabinet ministers, have been at the receiving end of her anger and insults,” said a former senior office-bearer of the party.

It is only those who have deep stakes in the party, have nowhere else to go or have a vested interest in continuing with the Trinamool are still with the party.

But, said the former office-bearer, even they are smarting from all the humiliation they have suffered and if the Trinamool is trounced in the assembly polls, the party will suffer a deluge. “There will be few left with Mamata Banerjee if she loses the polls,” he warned.

Added to all these is the prominence gained by Prashant Kishor and his I-PAC team. “I-PAC members run our social media accounts, tell us what to do or not to do and keep close tabs on us. Most of them are youngsters from outside the state and it is deeply insulting to have to listen to them. But we have to since that is what our party chief wants. Her nephew Abhishek Banerjee also wants us to obey Prashant Kishor and his team,” said a Trinamool legislator.

“I used to tell them to delete those abusive comments. This was simply not done. Imagine a bunch of youngsters running your Twitter handle and posting whatever they feel like. It was very humiliating. Senior leaders like us would have to abide by their suggestions on what to speak and how to conduct ourselves,” said Trivedi.

Trivedi and others confirmed that Mamata Banerjee deliberately fans intra-party rivalry. “She pits one leader against the other and encourages people to speak against each other. That way, she feels, she can prevent a leader from becoming too strong. This stems out of her deep sense of insecurity,” said the Trinamool legislator.

Many ‘clean’ and incorruptible leaders in the Trinamool are also very upset with the corruption in the party’s ranks and the manner in which many have amassed huge wealth. The culture of violence and intimidation that the Trinamool so eagerly adopted from the Communist Party of India-Marxist (CPI-M) has also been a sore point with principled leaders and workers of the party.

Yet another factor behind the resentment among many leaders, including Suvendu Adhikari who quit the Trinamool recently, is the growing clout of Mamata Banerjee’s nephew Abhishek.

The Trinamool chief, many believe, has propped up her nephew to undercut other leaders. Abhishek is perceived to be someone who lacks political skills and the credentials to hold any senior post in the party.

“He has not put in his sweat and does not deserve the importance he gets in the party. His only credentials are his blood ties with Mamata Banerjee. Why should Abhishek dictate anything to people like me who have contributed so much for the growth of the party? Who is he?” asked an angry Suvendu Adhikari.

Those who have left the Trinamool, as well as some who are biding their time in the party, say that this toxic combination of factors makes it impossible for any bhadralok to continue in the party.

“Keeping mum, grovelling before Mamata Banerjee and her nephew, listening to the diktats of Prashant Kishor and his team, humouring the coterie around Mamata and staying away from the limelight is the only means to survive in the Trinamool,” said an MLA who quit the party recently.