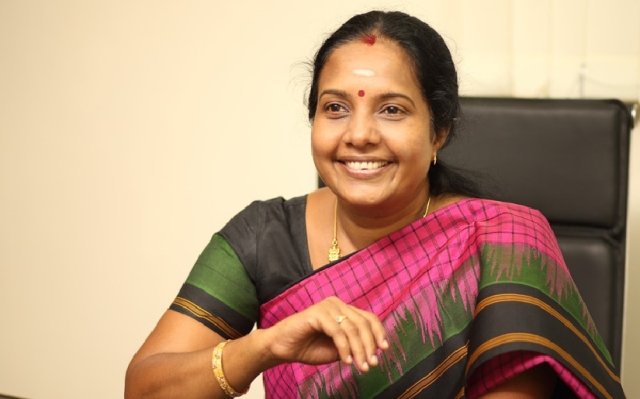 BJP’s election office in Ramnagar, Coimbatore is buzzing with activity. Numerous volunteers, full of enthusiasm, are going about doing their assigned work in a methodical manner. It appears that every volunteer is clearly aware of his role, for nobody seems to be shooting any instructions to anyone. I am told that the candidate, Smt. Vanathi Srinivasan, was at a television studio for a recording.

A volunteer quickly came forward to take me to the said studio. He introduced himself as Rajan. An advocate who practices at Tirupur, Rajan said he is volunteering from the last one month in Vanathi’s campaign. His reasons for supporting Vanathi is clear: in addition to being a candidate of ‘Modi’s party’, Vanathi is also a fellow lawyer.

As we sit in his car, the FM Radio starts playing in full volume. A Tamil movie song comes to an end and an election advertisement starts playing. Vanathi is heard making a fervent appeal to the voters to give a chance to Modi’s party, immediately followed by a long message by ‘Amma’ asking people to re-elect her party.

Rajan tells me that in Coimbatore South, the fight is only between the BJP and the AIADMK. “It is a straight fight between Akka and Amma”, he quips. Like many other Coimbatoreans I spoke to, he is confident that this may be a bright spot in the BJP’s scheme of things in Tamil Nadu for 2016. As we reach the studio, I see Vanathi Srinivasan talking to a small group of volunteers outside the studio. On seeing me, she welcomes me with her characteristic smile. We sit chatting inside the studio with a glass of Kammangkul, a traditional Tamil summer drink in hand. Excerpts from the conversation:

Tejasvi Surya (TS): I have been in Coimbatore for the last few days. You seem to be everywhere—radio, Facebook, posters, local TV channels. Many are talking about a possible BJP victory in Coimbatore South. I also spoke to the correspondents of some of the major dailies like The Times of India and The Hindu. All of them are saying that this is a bright spot for the BJP. How do you see the turnaround that is happening on the ground?

Vanathi Srinivasan (VS): First of all, this constituency already has a good BJP support base. We stood first in the last Parliamentary election. People are already aware of Modiji as a symbol of development, as a national icon. The challenge is the Assembly election. Normally in the Dravidian political culture, in assembly elections people choose either of the two big Dravidian parties. But this time, things seem to be different.

In fact, we are focusing on the Smart Cities Scheme given by Modiji, the Skill Development scheme and youth-related schemes of the Central Government. I am told by people about their civic and infrastructure problems whenever I visit their homes, in cities and villages. Traders and industrialists speak about the need for international airport, train connectivity and other things. In a way I am assuring people that with the help of Modiji’s Smart Cities scheme all our civic amenities and infrastructure problems can be solved.
I am assuring them that as a representative from Modiji’s party - a person who is able to relate the dream of Modiji to the city – I can solve all their problems.

TS: But do you really think this message of Smart Cities and economic empowerment will gain sufficient political momentum in a political culture of freebies and doles?

VS: I tell people that unlike other parties, we are not treating them as beggars. We, from the BJP, are not relying upon these freebies to garner votes. We want to assure the future generation good jobs, good education and smart cities in the industrial areas. I hope that my assurance of giving jobs to people will bear fruit: whether they are graduates or school dropouts, they ought to, should be able to, and will be able to, get a job. We want to grow industries and jobs simultaneously. This is also Modiji’s dream.

After 50 years of Dravidian party rule, we are still not able to get drinking water daily! This is the situation.

TS: True. After talking to people here and following local news I feel that with the exception of the AIADMK, which is promising freebies with no full stops, other parties, even the DMK, is speaking about education, health, public infrastructure and such other things. Do you think a new culture is slowly but surely coming to bear in Dravidian politics? Marking a move away from freebies and political populism?

VS: Yes, I hope! Certainly the younger generations, especially those born after 90’s do not want freebies. They want good education. Good Jobs. Change. And I am sticking to that. I think that is why youngsters are backing my candidature. One singular point - empowerment. That they have to stand on their legs. Our message is clear: We should not treat our fellow citizens as beggars.

TS: And parasites of the State..

TS: This brings me to the promise of prohibition –something that is a common theme in all manifestoes. What is the BJP’s stand on this?

VS: Yes, we are already insisting on total prohibition. In fact, that is the BJP’s policy here. In fact, for me also, personally, I have even earlier demanded the closing of alcohol shops; and in fact, I had filed a public interest litigation at the High Court. I got two TASMAC shops closed. I tell people, particularly women voters, that for the last 25 years that I have been working in the public field, I have been incessantly fighting against this menace.

TS: But don’t you think prohibition will throw open underground sale of liquor and mafias? Also, liquor is a major revenue earner for the State. Which Government will forego such revenue?

VS: Yes, that problem is there. But it is ultimately up to the Government and the officials particularly to enforce prohibition. If the Government is willing to take a firm decision with a higher hand, then definitely that can be solved. But the fact is that the Dravidian parties, their supporters, their money power, all comes from liquor. It is not possible for them to bring in prohibition.

They have ruled this state for more than 50 years. They were the ones to introduce the phenomenon of Government selling liquor through its own shops. Because now women are turning against liquor, they (Dravidian parties) are appeasing the people with promise of prohibition. And I believe that youngsters are not believing them.

VS: First is nationalism. Our idea of the nation is very different from that of the Dravidian parties. Second, we are truly a democratic party. The DMK, the oldest party, is a senior citizen’s party. AIADMK is a one woman party. True, opportunity may come to any newcomers or youth in ADMK, but on what basis? Servility to Amma?

But I shall tell you about my case. At the age of seventeen I joined the Vidyarthi Parishad (ABVP). Later, step by step the RSS and the Vidyarthi Parishad have moulded me for a career in public life. And here in the Coimbatore district the average age of all BJP candidates is between 40 and 50. We are a real democratic party. Youth are getting attracted towards this. They are not fooled by dynasty politics and family politics. I think slowly the Tamil Nadu political trend is changing.

TS: So one is nationalism, and the second is intra party democracy–

VS: Second thing is that the political parties here, particularly the Dravidian parties, talk about self-respect. What is the self-respect that they are giving to their own party members? In the name of self-respect they had come to power. But who has self-respect? People are watching ministers bending and bowing… The DMK also. Except that family, nobody can be a leader there!

TS: Alright. This brings me to the next question. There has been a pronounced feeling among many BJP sympathisers that the BJP has not taken up any Hindu issues in the elections. For example, the investigation into the murders of Hindu/ BJP leaders have led nowhere. No arrests have been made. Is it not strange that the BJP has not taken this up in a big way? Also, there has been a lot of corruption and mismanagement in Hindu temples in TN. I was told that a Governemnt-run temple was recently closed in Coimbatore. The BJP has not taken up this issue as well. Many feel that if BJP had taken these issues it would have further differentiated the BJP from the Dravidian parties.

VS: Yes, of course, there is the issue of the Hindu leaders’ murders, etc. In fact, the party has been taking up this issue repeatedly. And even in our manifesto we are insisting about this, about the need for speedy investigation.

TS: But this has not been central to the campaign.

VS: Yes. Considering the overall political scenario of TN, I think there is a different campaign strategy in some places. I think that was not a core issue for all people. But definitely that is an issue for the BJP.

TS: You are saying that it is not a very important electoral issue.

VS: I do not say or suggest that by any means. The BJP has been speaking about it. But there are some more important issues that are cropping up.

TS: Alright. Let me not press that further. Lastly, if people are going to vote you to the assembly, what are the three things that will change in their life as Coimbatoreans?

For these I have to create lot of facilitation work. Working with industries and institutions especially. In each institution with the help of the Skill Development Ministry, we will provide an environment such that after college a youth will secure a job, or some assurance for his own Start-Up.

The third is, women. Their physical and mental health, their empowerment.

TS: Great! You have grand plans to usher in a new political culture in Dravidian politics. I wish you the very best and I hope that Coimbatore makes a smart choice when it goes to vote in the next few days from now. Thank you so much.

VS: Thank you Tejasvi. Thank you.