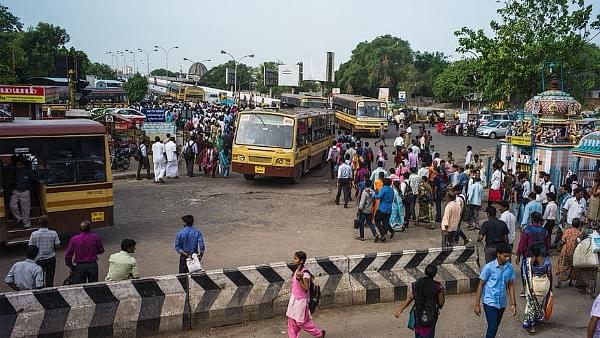 Commuters and political parties have been protesting vehemently against the hike in bus fares. (Sanjit Das/Bloomberg via Getty Images)

Early on Sunday (28 January) morning, the people of Tamil Nadu were greeted with the news of the E Palaniswami (EPS) government reducing the hike in bus fare. A week ago, the state government had hiked the fare between 20 per cent and 67 per cent. In a statement, the government now said it was cutting fares by up to 20 per cent of the hikes in select routes. Perhaps it was bowing to the intense pressure mounted by the opposition parties, which had even threatened to launch a “nation-wide stir”.

It is regrettable that the opposition parties put politics ahead of the state financial health in their list of priorities. More surprising is the aggressive stance of the Dravida Munnetra Kazhagam (DMK), which has been at the front criticising the state government for its current financial health.

Swarajya had published this story on the problems of Tamil Nadu State Road Transport Corporation while also pointing out here how the retired employees in particular were suffering. With the transport corporation running on a loss of Rs 9 crore every day, it is important that the government cuts the losses. The state could have thought of other ways to make up for these losses, but that is hardly an option in the current context, when the state is, in the words of DMK member of the Tamil Nadu assembly from Madurai Central constituency, “drowning in debt”.

The state Transport Minister Vijayabhaskar has apologised for the hike, but has indicated that the government was compelled to take the decision because of a financial crunch. The problem for the state government is that fuel prices are up over 40 per cent since 2011, when the fares were hiked last, while labour wages have more than doubled, leaving the corporation bleeding. The transport corporation is running with older fleet that has to be replaced and emoluments of staff, deducted for provident fund and pension, have been compromised. In these circumstances, it is important to look at the state’s financial situation.

While presenting the state’s budget for the 2017-18 financial year, the then finance minister D Jayakumar said that the state’s tax revenue has been limited by the negative impact on the economy. The state expected its revenue to increase to Rs 99,590 crore this fiscal from the revised estimate of Rs 87,287 crore in 2016-17. The budget estimate for 2016-17 state tax revenue was Rs 90,692 crore. A video presentation on the state’s finances by Thiagarajan said that the All India Anna Dravida Munnetra Kazhagam (AIADMK) government had missed its revenue target by at least 20 per cent during 2014-15 and 2015-16. At the same time, he said expenditure by the government had increased.

The 2017-18 budget claimed that the state’s revenue could increase by 15.20 per cent and 13.78 per cent in the 2018-19 and 2019-2020 fiscals. How far the state government will be successful in achieving this target is a moot question (whether the government will last till then is another). There are two stark pointers in the budget that show what went wrong in 2016-17. One was the income on stamps and registration fees dropping to Rs 7,894 crore from Rs 8,721 crore in the previous fiscal and the budget estimate of Rs 9,858 crore. Income from state excise and tax on other commodities did not meet the targets.

The state government’s receipts and revenue account shows that expenditure in 2016-17 was lower in the revised estimate at Rs 159,259 crore compared with Rs 164,029 crore envisaged in the budget estimate. Thiagarajan says that the government expenditure has fallen short of target because it has not been able to execute its plans. Or, the other explanation could be that it is faking its budget, he says. Expenditure for this fiscal has been targeted at Rs 175,293 crore. The most disconcerting aspect of Tamil Nadu’s finances is the rise in internal debt of the state government to Rs 59,372 crore, up from Rs 29,461 crore in 2016-17. The rise in the debt is on account of the state government borrowing Rs 21,680 crore to take over the debt of its electricity department (TANGEDCO). The debt has been targeted to be brought down to Rs 38,220 crore by the end of this fiscal. The question is: can the AIADMK government led by EPS bring things under control in such a situation?

According to Thiagarajan, the state’s debt doubled between 2011 and 2016 with internal payments rising to Rs 18,000 crore from Rs 8,000 crore. The bulk of the debt increased during 2014-16, when there was mismanagement of the state’s finances. But for implementing the Sixth State Pay Commission recommendations during 2009-11, the DMK government that was in power from 2006 to 2011 would have left revenue surplus.

Problems for Tamil Nadu probably began sometime in September 2014 when the then chief minister, J Jayalalithaa, was sent to prison in connection with the disproportionate assets case. She was subsequently acquitted by the Karnataka High Court and returned, but her bad health never allowed her to be in full control of the state. With the AIADMK getting into election mode in 2015, the financial situation worsened. It aggravated further in 2016-17 when the Jayalalithaa government waived off farm loans to keep its poll promise. Provisions have been made in the cooperative sector for writing off these loans in the last two budgets.

The problem with Tamil Nadu government’s finances is the growth in expenditure has been mostly towards paying interest, which has gone up 32 per cent during 2011-16. Tamil Nadu is probably paying for lack of investment during 2014-16, says Thiagarajan. The situation could turn grim when the Seventh State Pay Commission recommendations will have to be implemented. Come March, we will get to know if the Tamil Nadu government has been able to meet its budget targets and how much of its debt has been reduced. Going by the current trend, the prospects are bleak as the targets could have been missed.

One of the reasons for missing the targets is the closure of liquor outlets following the Supreme Court order, which initially banned outlets within 100 m on National Highways. But by the time the apex court clarified on its order, over six months had lapsed. Liquor revenue makes up about 20 per cent of the revenue income for Tamil Nadu. The North-East Monsoon, which benefits Tamil Nadu in a significant way, has been deficient again and we will have to watch out for the effects of this deficiency. Tamil Nadu has got no new projects while the EPS government seems to be going through its motions casually. Lack of new industries means slack growth and no new avenues for government income.

Knowing all of this, the opposition parties should not have raised the pitch against the hike in bus fares. DMK working president M K Stalin said the government could look at other revenues like advertisement instead of hike in bus fares. But by the time the solution through advertisement is found, the transport corporation would have accumulated another Rs 100 crore loss. Has anyone made any study on how much advertisements on states buses can yield? Did the DMK government try during 2006-2011 and what was the result?

Opposition parties have been irresponsible on this issue. They have also forgotten some basic things while going overboard with their protests. Are these parties aware of the Tamil Nadu government’s expenses towards social welfare programmes or plainly freebies? Nearly Rs 25,000 crore are spent on these programmes. The AIADMK government had justified the continuation of its liquor policy by pointing out at the expenditure on social welfare programmes.

Tamil Nadu enjoys an advantage over other states for setting up industries with its airports and sea ports. It also has skilled labour. But these advantages must not be lost to poor financial health. The state is facing problems and it needs some sane heads to get it out of its current mess. In ensuring that the state comes out of its problems, all parties must come together to bury their differences, at least economically, for the people’s welfare.