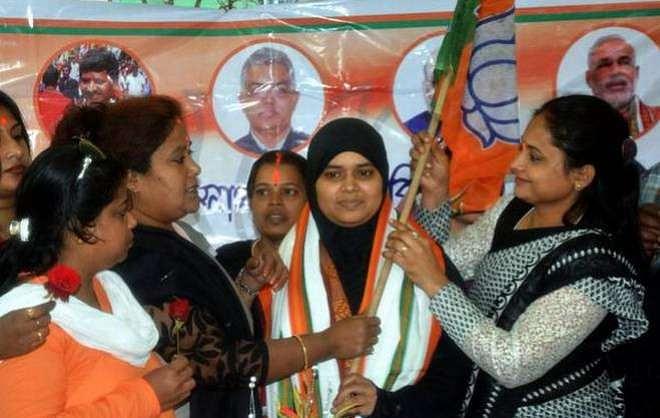 Last week, Ajit Murmu, one more child of the lesser god, died an inconspicuous death. Neither his journalist credentials nor his tribal status could arouse sympathy among the media or intelligentsia. An editor of Ranibandh Mandal, Murmu paid with his life for displaying his political conviction in the open and seeking to contest panchayat elections with the support of Bharatiya Janata Party (BJP). His brutal hacking in front of a block development office, allegedly in the presence of West Bengal Police, did not see raised tempers in news studios. No candle light vigils were held by liberal crowds and despite the slaughter having followed killings of other BJP members across the country, no newspaper headlines screamed 'murder'. Between the bouts of frenzy over ‘intolerance’, Murmu’s killing was an occasion for media, intelligentsia and activists to go back to their silence. In the world of liberal secular commiseration, Murmu was doubly cursed. He was sympathetic to BJP and was a member of a tribal community.

On the night of 22 February, earlier this year, Jitani Chakma, a 32-year-old tribal woman from Nalkata village of North Tripura was all alone in her house when her father-in-law and brother-in-law barged in. The duo started abusing her for shifting political allegiance from Communist Party of India (Marxist) and voting for the BJP, despite their warnings. At one stage when she answered them back, they attacked her with sticks first and bricks subsequently. Receiving fatal injuries to her head and chest, she died while being taken to the district hospital in Kailashahar.

In October 2016, a Dalit BJP worker Vishnu Prasad was hacked to death by CPI(M) men at his home in Kannammoola, a suburb of Thiruvananthapuram. Prasad’s mother Bindu and aunt Laila, who tried to save him, also received grievous injuries. In June 2014, a group of Trinamool Congress (TMC) workers at Kanur village of Birbhum district dragged 55-year-old Raheem Sheikh from his house and tied him to an electricity pole. Cudgel blows kept landing on poor Sheikh until he passed away. His fault was once again the same – supporting the BJP. Half of the accused in Sheikh’s killing were his co-religionists.

Murmu, Chakma, Prasad and Sheikh are faces of an intolerance story, which has hardly been told. All of them had defied the liberal secular template. In the liberal secular dogma, BJP was an indubitable enemy of the social groups the deceased came from. A studied silence by an otherwise voluble media showed that by daring to sympathise with the ‘enemy’, the victims had committed a sacrilege. These victims and many others like them were, therefore, to remain statistics buried in 3 centimetre by 10 centimetre columns on fifth or sixth page of a newspaper, if the mention of their killings became unavoidable. None were to get a face while reporting and there was to be no question of debates or discussions being conducted over the tragedies.

In a political discourse, where fanaticism and intolerance have become buzzwords, what bigotry would be worse than killing people for changing political opinions and that too, many a times, by those who had regarded them their own. Though the number of such political killings is shocking, the zealotry is betrayed in many other brute ways. For instance, Kavita Kaloi, 49, of Teliamura in Tripura was attacked by CPI(M) goons for switching her loyalties. After a brutal assault, she was raped when she had fainted. Kaloi has lost vision in her left eye for ever. In Shantirbazar of South Tripura, 25 Muslim families were boycotted by their local mosque for supporting the BJP. Vishnu Chaudhary of Bansberia in Hooghly District was abducted and tortured by the Trinamool cadre for attending BJP president Amit Shah’s rally.

Many Muslim women have faced harassment and torture for defying community edicts and supporting the BJP. In Assam's Sonitpur, Dilwara Begum was divorced by her husband Aimuddin Ali after she voted for the BJP. Nagma from Matoori village in Ballia District was allegedly thrown out of her home by her husband and in-laws for painting portraits of Prime Minister Narendra Modi and Uttar Pradesh Chief Minister Yogi Adityanath. Saira from Englishganj in Bareilly District was beaten and divorced by her husband Danish Khan for participating in a rally convened by Haq Foundation to thank the Union government and celebrate the court verdict on triple talaq. Ishrat Jahan, one of the petitioners in triple talaq case, who later joined the BJP, faced unremitting abuse and ostracism at the hands of her neighbours and family in Pilkhana area of Howrah. The list is long but the interesting fact is that neither the self-proclaimed liberals nor any feminist groups came out in support of their right to exercise political choices.

While the stories of harassment, torture and killings of BJP cadre in Bengal have been too many to ignore, few outside the state know about the specific targeting of the party’s Muslim supporters by Trinamool goons. On 24 October 2014, Moazzam Sheikh, Sheikh Suleiman and Sheikh Tauseef were killed when Trinamool goons armed with firearms and bombs attacked Makhra in Birhbum District to “recapture” this Muslim-dominated village, which had decided to support the BJP. According to a news report in Mumbai Mirror, “TMC goons armed with guns and bombs went on a two-hour rampage in the village as the Party was allegedly irked over inroads being made by BJP in rural Bengal. The attackers opened indiscriminate fire, exploded bombs, beat up villagers and set fire to several residences.” The report quoting sources claimed that “though police was present barely 50 metres away, they chose to remain mute spectators as the TMC men went about clearing the village of BJP supporters”.

Twenty days later in the neighbouring Chowmandalpur, 17-year-old Sheikh Jassim was the fifth Muslim BJP supporter to be killed by Trinamool men in the state. Chowmandalpur is also a Muslim-dominated village, which the Trinamool had set out to “recapture”.

If an inordinate number of BJP's Muslim supporters have been killed in West Bengal, a large number of scheduled caste and scheduled tribe workers of the party are being targeted in southern states. At least four of the 24 BJP and Rashtriya Swayamsewak Sangh (RSS) workers killed in Karnataka belonged to scheduled castes and scheduled tribes. In most of the cases, activists of Popular Front of India (PFI) and other Islamist organisations have been arrested. In spite of a clear pattern emerging in the killings, neither the state government nor the liberal media has pointed out the method to this madness.

In a shocking case, the then state home minister tried to make light of a gruesome killing of a scheduled caste BJP worker in Bengaluru. In another, defending Wasim, son of a Congress block leader and main accused in the sensational Santhosh murder case, home minister Ramalinga Reddy said that the accused did not intend to kill the victim while continuously denying Santosh’s association with the BJP.

The most furious reprisals that SC and ST supporters of the BJP have faced have been in Kerala. According to the party, around 30 BJP and RSS activists have been killed in Kerala in the last eight years; 14 of them since the CPI(M) came to power in 2016. A resident of chief minister’s own village Pinarayi, 25-year-old Remith was hacked to death in front of his mother and pregnant sister. Remith was a second generation victim of the communist terror. His father Chavassery Uttaman was also murdered by CPI(M) workers in 2002.

Most of the BJP and RSS activists killed in Kerala belonged to scheduled castes, scheduled tribes and other backward castes. E Rajesh, an RSS worker from the SC community, was brutally hacked to death in the state capital Thiruvanathapuram by CPI(M) members. Rajesh had 89 wounds to his body and both his hands were chopped off. Parts of his body had to be collected in a bedsheet for postmortem. The killing of 27-year-old mild mannered P V Sujith, who had left Democratic Youth Federation of India (DYFI), CPI(M)’s youth wing, to join RSS was a shocker even by Kannur’s gory standards. Attacked by a group of 10 CPI(M) men, Sujith was beaten with rods and then hacked to death by a sword in front of his aging parents. His parents and brother were also attacked when they tried to save him.

Once again, the killings of BJP members in Kerala are the most violent expression of day to day hostility and intolerance meted out in different forms. Torture and harassment come in various degrees and here too scheduled castes and scheduled tribes remain the most vulnerable. Construction worker, Manjunath of Pathiriyad, is an example of the militant intolerance that threatens people like him for their political affiliation. According to a report dated November 2017 in The Hindu, Manjunath was abducted in an auto and attacked with a rod. He was threatened with murder if he continued his association with RSS. Manjunath, whose house had been earlier destroyed by CPI(M) members, was frequently shifting his residence for the fear of his life. In Azhikkal, a small town in Kannur, communists controlling the temple committee denied entry to scheduled caste members of the village for supporting the BJP.

In post-independent India, there is no parallel to the violence that the BJP has met as a political entity. From insurgencies in Punjab and North East to victims of political violence, BJP and RSS have suffered the most. Violence against them has intensified with growth and spread of the party. Yet none in the media has pointed out towards this intolerance. Members joining the BJP from social groups slotted as adversaries of the party have been the hardest hit. Not only do they face threats, intimidation and physical violence, intelligentsia, activists and mainstream media completely ignore their plight. Media’s commitment towards scheduled castes, scheduled tribes and minorities vanishes in thin air when the victims happen to be on the saffron side.

The deafening silence is an approval of the punishment meted out for their apostasy. It will not be wrong to say that by crossing the bounds of justifiable criticism and demonising BJP and RSS, sections of media and intelligentsia have not only sought to delegitimise their political pursuits but also prepared a ground for this violence. It is classic Orwellian doublespeak therefore, that such bigotry has sermons for us on intolerance.