The Maoist Menace That Looms Large Over Assam And North East 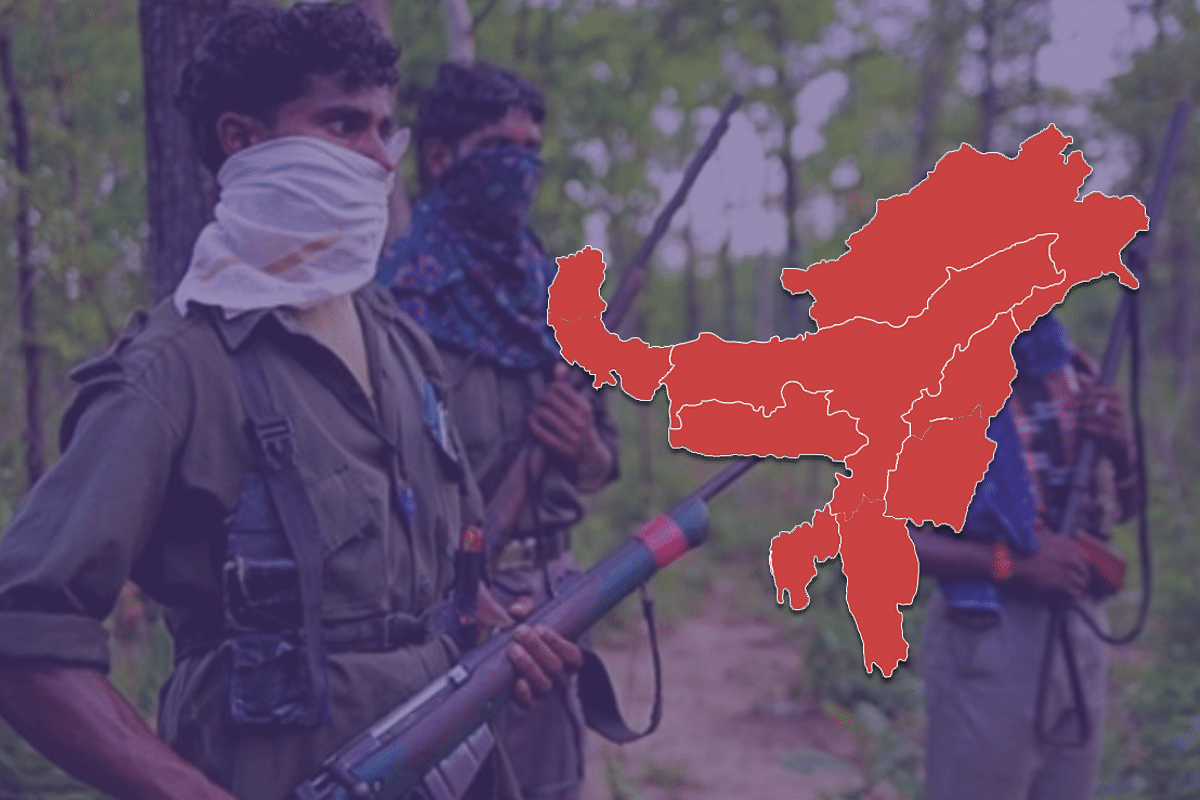 The arrest of two suspected Maoists from Assam’s Karimganj district by the National Investigation Agency (NIA) on Sunday (3 April) had brought to the fore the grave Maoist threat that looms large over Assam and the entire Northeastern region.

A team from the NIA, which has been probing the efforts of the Communist Party of India (Maoist) to spread its tentacles in the region, arrested a married couple — Raju Urang and his wife Pinky — from their house at Patharkandi in Karimganj early Sunday morning.

A laptop computer containing vital information, maps, mobile phones and other documents were seized from the duo. This arrest comes on the heels of an Assam Police team nabbing senior Maoist strategist and CPI(Maoist) central committee member Arun Kumar Bhattacharjee from a tea garden in Assam’s Cachar district in early March.

Bhattacharjee, who goes by his nom de guerre ‘Kanchan’, was hiding in the tea garden and was tasked with recruiting young men and women, especially from the tea tribes of Assam, into the proscribed CPI(Maoist). He had been active in organisational and terrorist activities in Andhra Pradesh, Odisha, Telangana, Jharkhand and Chhattisgarh.

‘Kanchan’, 72, had planned many terror strikes in these states and has more than 200 cases lodged against him in various parts of the country. He carries a reward of Rs 3 crore on his head.

The ‘terrorist’, who is being interrogated by the Guwahati Police, revealed that he was given the task of organising the first party congress of the CPI(Maoist) in Assam, recruiting poor and disgruntled folks into the terror outfit and expand its footprints across the region.

Akash Urang, alias Kajal, a close associate of ‘Kanchan’ and a member of the Assam State Organising Committee (ASOC) of the CPI(Maoist), was also arrested along with Bhattacharjee. A laptop computer, Rs 3.6 lakh in Indian currency and some incriminating documents were recovered from them.

Another associate of ‘Kanchan’ was nabbed by the police from Dibrugarh in Upper Assam on Monday (April 4). Rima Orang, alias Saraswati, had slipped away from the tea garden in Cachar when the NIA team arrested her mentor (Kanchan).

ASOC convenor Tingraj Orang had ‘surrendered’ to the Assam Police in September last year. Tingraj was also the general secretary of the ‘Barak & Brahmaputra Valley Zonal Committees’ of the CPI(Maoist). He was a member of the CPI(M)-affiliated SFI, and the CPI(M), in the late 1980s. A radical communist, he gravitated towards the CPI(Maoist) and joined the terror outfit in 2006.

Tingraj was mentored by senior Maoist Prashanta Bose alias ‘Kishan’, the head of the eastern regional bureau of the red terror outfit. Tingraj was arrested by Odisha Police from Rourkela in 2011 along with fellow terrorists Aditya Bora and Ajoy Sabor. He was granted bail but absconded.

Tingraj, say Assam Police officers, had done a lot of groundwork in expanding the Maoists’ base in Barak and Brahmaputra valleys of Assam. He had recruited a number of fellow tribals working in the tea gardens of the state into the CPI(Maoist).

Senior Assam Police officers told Swarajya that ‘Kanchan’ has revealed he was also tasked with procuring arms for the fledgling Assam State Organising Committee (ASOC) of the terror outfit. “He (Kanchan) had positioned himself very strategically in a tea garden (by the name of Patimara) that lies close to the Assam-Manipur border and also to the neighbouring district of Dima Hasao (Assam). That facilitated easy contact and communication with militant outfits in Manipur and, thus, procurement of arms,” the officer said.

‘Kanchan’, who hails from Howrah district of Bengal, told his police interrogators that the CPI(Maoist) had succeeded in setting up cells in many tea gardens and interior areas of Assam, especially in the Barak Valley. “Many tea gardens, especially in the Barak Valley, are ailing and the workers (most of them tribals who were brought in by the British from the Chotanagpur plateau) are suffering. The Maoists are taking advantage of their plight to indoctrinate them and recruit them into the terror outfit,” said the officer.

‘Kanchan’ and his band of lieutenants have been operating silently in Assam over the past few months and, suspect police officers, have been successful in recruiting many tribal youths into their terror outfit.

“The Maoists have, for many years now, had this grand plan of expanding to the North East and also establishing alliances with insurgent outfits of the region. The ultimate plan is to establish a ‘red corridor’ starting from the extreme eastern reaches of the region bordering Myanmar and China through the narrow ‘Siliguri corridor’ to the central part of the country. That represents a grave threat to India’s security and integrity,” said the police officer.

The Maoist is learnt to have told his interrogators that his terror outfit’s plans to expand to the North East have met with considerable success. The CPI(Maoist) has been able to indoctrinate many tea garden labourers (tribals) and sections of poor and marginalised communities in the Barak Valley as well as Upper Assam.

‘Kanchan’ is also said to have held discussions with some Kuki and Naga insurgent groups (operating out of Manipur and Nagaland) as well as elements of Dimasa outfits (operating out of Dima Hasao district of Assam and demanding a sovereign Dimasa state). The discussions have been fruitful, and the faction of the Nationalist Socialist Council of Nagaland (NSCN) led by Thuingaleng Muivah has taken the lead to forge an alliance with the CPI(Maoist) and bring other insurgent outfits of the region into this alliance.

The Muivah-led faction of the NSCN, which is now engaged in peace talks with the government of India, has strong links with China and many security experts hold that the outfit acts at Beijing’s behest. The experts believe that the fledgling alliance between the NSCN and the Maoists, who also owe primary allegiance to China, is the handiwork of Beijing. China supports — morally and materially — insurgent groups in some countries, most notably in Myanmar, and often uses those groups to control governments of those countries.

According to senior officers of Assam’s State Intelligence Bureau (SIB), the Maoists have also met with some success in winning over poor and marginalised people in Manipur and Tripura, two states that have a communist presence.

“The modus operandi of the Maoists is to establish contact and win over radical communists and then use them as resource persons to establish their presence in those states. ‘Kanchan’ himself was a mainstream communist — a member of the CPI(M)-affiliated Students’ Federation of India (SFI) and then the CPI(M) — before he was radicalised and inducted into the Maoist terror outfit,” an SIB officer told Swarajya.

Mainstream communist parties have had a presence in Manipur and parts of Assam, and the NSCN is often viewed by intelligence agencies as the cat’s paw of China. It has, thus, been relatively easy for the Maoists to foray into the three states.

What is cause for more concern is the CPI(Maoists)’s plans to enter poverty-stricken and backward areas of Meghalaya and Arunachal Pradesh. Decades of neglect, poor governance and corruption by successive governments in the Northeastern states (ruled for most part by the Congress) has resulted in vast swathes of the region wallowing in poverty and backwardness.

The Maoists now view those areas a fertile territory to spread their ideology and recruit foot soldiers —often cannon fodder — into their terror outfit. ‘Kanchan’ and his associates are learnt to have travelled to some interior areas of Meghalaya and Manipur and identified some key ‘resource’ persons there. These ‘resource’ persons were in the process of being brainwashed and indoctrinated when ‘Kanchan’ was nabbed.

SIB officers say that more associates of ‘Kanchan’ are absconding and a massive and covert manhunt has been launched across the region to nab them. Some of them, say the intelligence officers, may have slipped into Bangladesh and even Nepal.

The CPI(Maoist) has often flirted with radical Islamist terror groups, and is learnt to have established ties with Bangladesh-based outfits like the Ansarullah Bangla Team (ABT) — a front of the Al Qaeda in the Indian Subcontinent (aQIS) — and the Jamaat-ul-Mujahideen Bangladesh (JMB). These Islamist terror outfits are said to have provided safe havens to some Maoists who are on the run. Some elements of Nepal’s Maoists also have fraternal links with their fellow-ideologues on this side of the border.

The Intelligence Bureau (IB) feels that Maoists pose a real threat to peace that has come to prevail over vast areas of the restive North East in recent years. “Many areas of the region are still very backward and poor, and people there harbour some degree of resentment towards the Indian state for their sorry plight. It will be easy for the Maoists to leverage that resentment and gain strength in the North East. Given the allegiance that they (the Maoists) owe to China and Beijing’s propensity to play them against the Indian state, as well as the linkages between the Maoists, some insurgent outfits of the regional and Islamist terror outfits, the situation could turn dangerous,” a senior IB officer told Swarajya from Delhi.

The IB has been asking Assam and some other states of the region to mount vigil on growing Maoist activities in their states. The arrest of 'Kanchan' and a few other Maoists is the result of this stepped-up vigil. But what’s of concern is that many more ‘red terrorists’ are operating covertly in the region and it will take a lot of effort to nab or neutralise them.