The NDA May Have Bagged Bihar, But It Won’t Be Smooth Sailing For The Alliance 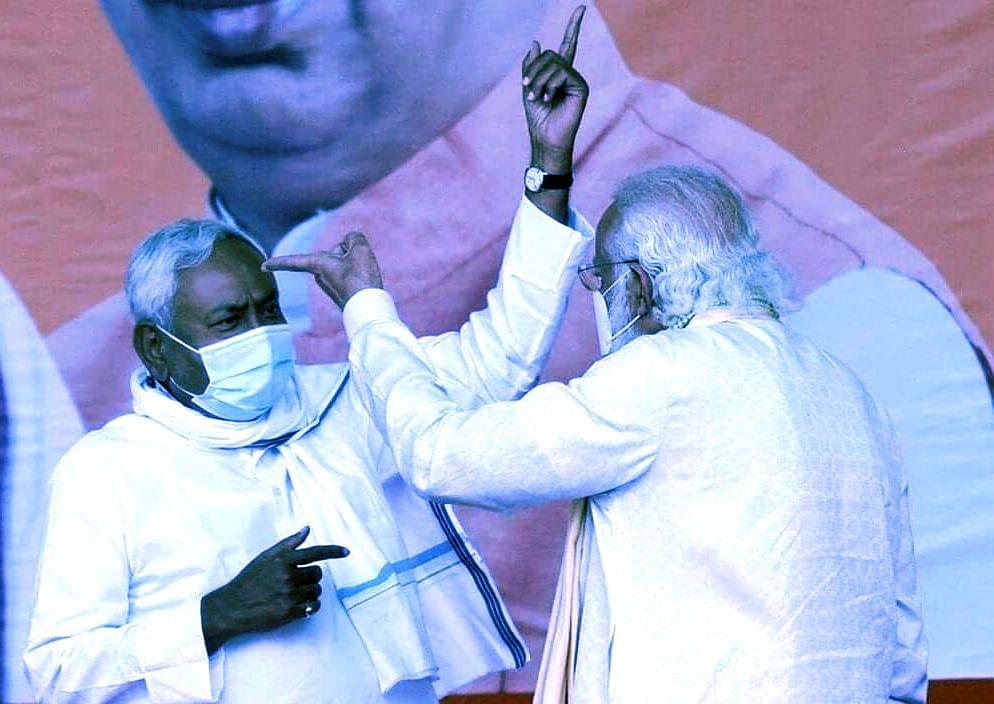 Winning the assembly elections, albeit with a slender margin, has perhaps been the easier part for the National Democratic Alliance (NDA) in Bihar.

Managing the coalition, with its changed equations, smoothly and running the government successfully with a resurgent  and aggressive Rashtriya Janata Dal (RJD) snapping at the heels will be the tough part.

The Bharatiya Janata Party (BJP), which has been the junior partner in the NDA for so long and has always played second fiddle to elder brother Janata Dal (United) or JD(U), is now the senior partner with 74 seats as against the JD(U)’s 43.

Ever since the formation of the NDA in 1998, the BJP has been content as the smaller brother to the JD(U) in Bihar.

The JD(U) broke away from the NDA in June 2013 and contested the 2015 elections as part of the Mahagathbandhan with the RJD and Congress as allies. It won 71 seats that year, while the BJP won 53.

The JD(U) parted ways with the Mahagathbandhan in August 2017 and returned to the NDA. All through, Nitish Kumar remained the chief minister while the JD(U) gave itself a lion’s share of important portfolios.

Also, Nitish Kumar centralised all powers in the Chief Minister’s Office or CMO and hardly delegated any responsibilities to his ministers, especially those belonging to the BJP.

It was Nitish Kumar who always decided on policy matters, most often unilaterally, and made major appointments, postings and transfers.

BJP’s Sushil Modi, who was the deputy chief minister, played a largely ceremonial role and though he was in charge of the finance department and some other inconsequential ones, it was the CMO which effectively ran those departments.

But that is set to change now with the BJP bagging a much larger number of seats than the JD(U). Nitish Kumar will be the chief minister, but the BJP will no longer be happy deferring to him any more.

Apart from demanding major portfolios, the BJP will also want a greater say in running the government and in framing policies.

The BJP is sure to cite the anti-incumbency that Nitish Kumar faced, and which was negated only by the energetic and aggressive campaign led by Prime Minister Narendra Modi (read this), while demanding a change in Kumar’s style of functioning and a dominant role in running the government.

Nitish Kumar, who has been governing the state through a coterie of trusted bureaucrats and has limited the role of his ministerial colleagues in the governance structure, will find such demands difficult to accept.

An assertive BJP is also not going to go down well with senior JD(U) leaders who have gotten used to treating the saffron party as a junior partner. They are likely to chafe at the BJP’s bid for dominance.

They are likely to try and influence Nitish Kumar to resist the BJP’s demands and that can cause a fair bit of friction in the alliance.

The RJD, which has emerged as the single largest party, will definitely try to play on the JD(U)’s discomfiture with being relegated to the role of a junior partner in the NDA in Bihar and encourage rifts within the alliance.

The JD(U), which has a history of being suspicious of alliance partners, has been sceptical of  the BJP’s assertions that it did not prop Chirag Paswan’s Lok Janshakti Party (LJP) to inflict a setback on the JD(U) (read this).

The BJP leadership has been asserting the party’s wholehearted commitment to the alliance with JD(U) and had made it clear that even if the BJP wins more seats than the JD(U), Nitish Kumar will be the chief minister. But suspicions persisted.

More so since Modi, in his campaign speeches, paid tributes to the late Ram Vilas Paswan, and refrained from criticising Chirag Paswan. Also, the LJP continues to be part of the NDA at the Centre.

These persisting doubts in the minds of JD(U) leaders are likely to affect the smooth conduct of affairs in Bihar.

A lot will depend on how the BJP handles the LJP at the Centre. Chirag Paswan may demand that his father’s portfolio in the Union council of ministers be given to an MP from his party. Even he may lay claim to it.

That would put the BJP in a tight spot since the LJP’s claim to a berth in the Union cabinet in place of Ram Vilas Paswan, who died in harness, is justified.

But if the demand is conceded, it will definitely anger the JD(U) which has stayed away from the Union council of ministers since the BJP had turned down its demand for ‘proportional representation’ in the Union cabinet.

The JD(U), with 16 Lok Sabha MPs, claimed it had a fair claim to more than the one cabinet berth it was being offered since the LJP, with just six Lok Sabha MPs, was also given one berth.

Representation in the Union cabinet has remained a sore point with the JD(U) and if the LJP is offered a ministerial berth now, it can trigger more murmurs of discontent within Nitish Kumar’s party.

Another major factor likely to dog the Nitish Kumar government’s performance is an invigorated RJD, which has emerged as the largest party with 75 seats (one more than the BJP).

The RJD, which came tantalisingly close to power, will mount a stiff resistance to Nitish Kumar who has, so far, never faced a strong opposition.

The RJD, egged on by the Congress, is likely to make things difficult for Nitish Kumar. A confident Tejaswi Yadav will be snapping at Kumar’s heels.

This can not only affect Nitish Kumar’s functioning, but also create tensions in the BJP-JD(U) alliance.

The absence of not only a second-rung leadership in the Nitish Kumar-centric JD(U), but also a chosen heir, has already started playing on the minds of senior JD(U) leaders since Nitish Kumar has publicly announced that he will not contest elections in 2025.

This makes the JD(U) vulnerable to pulls and pressures from not only the BJP, but also the RJD and other parties. There will be many attempts by various parties to entice away JD(U) leaders.

A JD(U) buffeted by so many uncertainties, suspicions and pressures is not good news for the NDA.

The NDA in Bihar, especially the dominant partner (BJP), may soon discover that winning the elections was the easier part. Running the government smoothly and successfully for the next five years will be a tougher challenge.