The Psychology Of Meanness: Why General Rawat’s Passing Was Vilified By Some 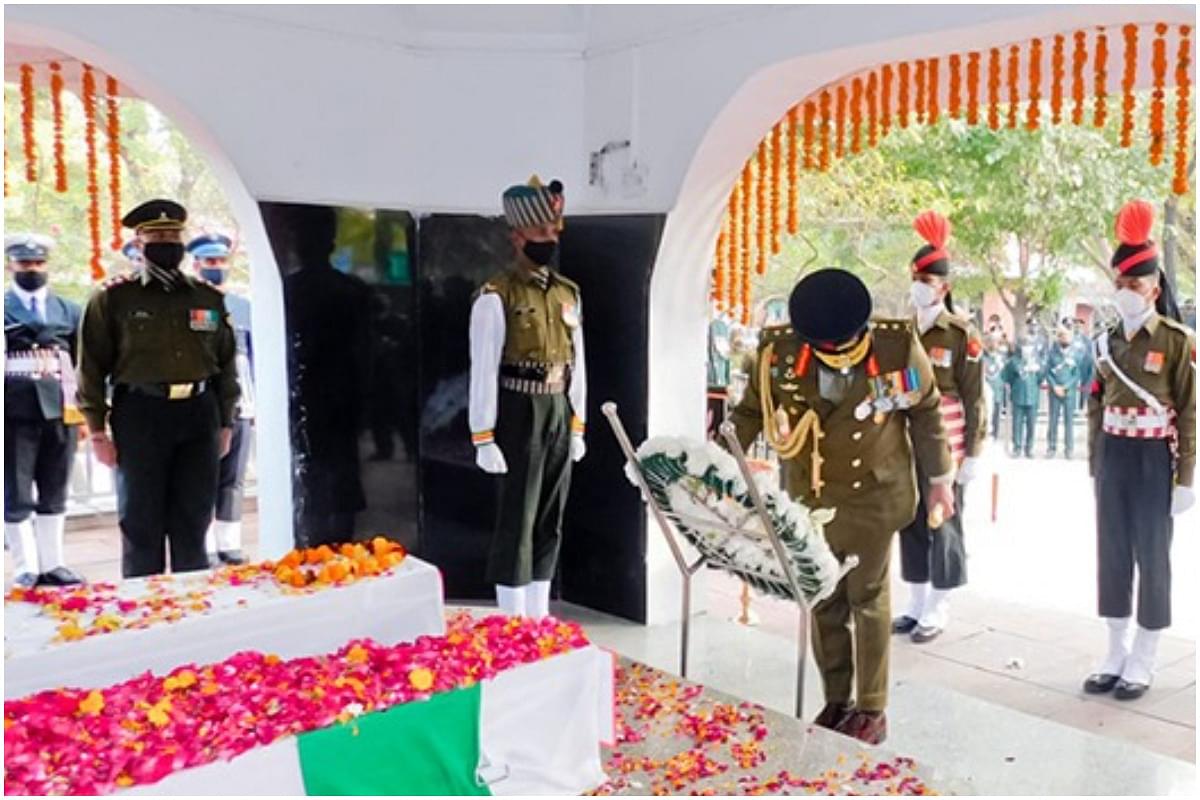 It was always evident that General Bipin Rawat, India’s Chief of Defence Staff, was a popular man, but the true extent to which Indians admired him became fully visible only upon his tragic death, when a collective expression of grief, the likes of which have rarely been seen in recent times, surged across social strata and messaging media to fill every available space.

Children propped up portraits of their fallen hero on footstools at street corners. Student bodies hung large banners at their college entrance. A cobbler’s simple, heartfelt effort to honour the General went viral on social media.

In touching spontaneity, people in and around Coimbatore came out in droves to line the road, as the caskets were lorried from Wellington Staff College to Sulur air base.

“Veera vanakkam!” they cried in much anguish and more pride, “Veera Vanakkam!”; “Hail the brave!”

In that instant, something remarkable happened: a putrid, century-old, Periyarist-Dravidian push for separatism was shown up, by these noble folk of our ancient land, as the wretched, bogus, Marxist-Atheist construct it had always actually been.

One of the most poignant gestures condoling the tragedy was by the Kanchipuram Matha, established under the precepts of none other than Adi Shankaracharya himself, when a rare glow was seen at the Kamakshi temple there.

Swami Vijayendra Saraswathi, the present head of the Matha, ordered the lighting of a Moksha Deepam — a salvation lamp — to mark the moment. Its meaning was as straightforward as it was timeless: defenders of this realm were defenders of Dharma, so those who fell in service attained salvation instantly.

But grief never walks alone, since one man’s loss is invariably another’s opportunity to indulge in schadenfreude. And so it came to pass, that even as India was seized by shock and gloom, the internet began to fill with comments of a vile and mean nature.

This spectrum of barbs ranged from open glee at General Rawat’s untimely death, to unfeeling contempt, uncaring relief, and insensitive insouciance. They don’t merit repetition here, since attention is precisely what the culprits were after, but suffice to say that the messages constituted a lesson in meanness (Readers interested in gauging the depths of such depravity may scour a compilation here)

As soon as the news broke, there was also a repugnant eagerness to declare General Rawat dead. The helicopter carrying the General, his wife, and a dozen others, crashed in the Nilgiris shortly after noon on 8 December.

Preliminary reports of who actually was on board came out around 1 PM; at that time, the news was that three might have died, and that a few of the injured were being ferried to the military hospital at Wellington.

And yet, tweets started appearing within the hour, either expressing condolence at the General’s demise, or hinting that he may have passed on.

One particularly offensive post asked the government to stop dragging its feet and confirm that the man was gone.

In their haste, did any of these doomsayers spare a thought for the General’s family? It appears not, because those who hastened to express premature condolences, or sought instantaneous confirmation of the tragedy from the government, just didn’t seem to care.

Surprisingly, many of those who indulged in such unacceptable behaviour were former military men. One, in particular, followed up an insensitive afternoon message with a cheery, nigh-celebratory, late night post marking merriment, of a rich, delicious-looking strawberry cake to be enjoyed shortly thereafter for dessert.

It stood out not just for the inappropriateness of its timing, but also because the handle does not normally post food pictures.

This was meanness, plain and simple; the intention was to insult, to hurt by words, and to feel better by having acted acting thus.

So, the question is: what sort of people would behave in such a mean manner?

A stock, technical description of meanness is that it is a common characteristic of bullies, which becomes more visible in older people when they are no longer capable of repressing their unhappiness or regrets.

Psychologists define it as a compulsive behaviour reflecting deep bitterness which builds up over time, and stems from a negativity which is difficult to remedy.

This forces a break from social norms, and makes such afflicted individuals stand out in a crowd because of their jarring acts and comments. That doesn’t mean they are not intelligent; indeed, the opposite is often the case (most readers would instantly relate this point with sadist bosses they had to suffer, who were good at their work).

Meanness of the sort exhibited upon General Rawat’s death, therefore, is not a new phenomenon; it has, in fact, been identified as the bane of society throughout history.

The ancient Greek philosopher Aristotle called it a vice which stunted virtues. Medieval Christian humanist Thomas Aquinas called it a "lowness". Samuel Johnson classified it as a form of cruelty (hence the sadism aspect).

Modern psychiatry recognizes meanness as a form of psychopathy — a set of dark traits which causes harmful, antisocial behaviour. In America, meanness is formally identified as part of a psychopath’s standard mental makeup.

It develops in early adulthood because of lower adaptive function to a social framework; meaning, an inherent inability to conform. This, then, is the psyche of the ‘compulsive contrarian’ which the late Arun Jaitley warned us against (some of whom mocked his death too, thereby proving the point).

In India, and in the present context, of the repulsive comments made about General Rawat’s death, these exhibitions of meanness, and the psychopathy surrounding them, have a curious provenance (Here, readers should keep two, sometimes-overused, words in mind while the linkages are derived: deracination, meaning a visceral cutting of cultural and spiritual links, for specific ideological reasons, to the norms of one’s parent society; and ressentiment, meaning intense, helpless frustration caused by an inability to change the world around you)

Our starting point is that General Rawat drew the usual suspects’ ire because he was a patriot who was popularly identified with the nation he defended.

This problem becomes particularly acute in a country like India, which is as defined by geographical and modern political borders, as it is by a sacred geography stretching back to before recorded history.

In such a situation, rejecting god also ends up meaning a rejection of country, along with the customs, rituals and practices which traditionally defined it through long arcs of time.

This is, perhaps, why the concept of ‘nations without borders’ is so popular in the usual quarters.

Now, it is well within a citizen’s rights to reject religion, but if, in the process, that rigid rejection results in an arbitrary, incomplete definition of nation, which conflicts directly with how an overwhelming bulk of the others perceive their nation, and themselves, then society has a huge problem.

This is because the non-conformists, then, aren’t just rejecting god, but inadvertently the nation too, in part.

The consequence of such ideological contradictions, as our modern history teaches us only too painfully, includes an acceptance of partition, a new ‘idea of India’ to justify that acceptance, and a perception that anyone who thinks differently is a threat.

The list is obviously a lot longer, but the point here is that it is this same muddled thinking which promoted a whole spectrum of violent, social friction.

Be it, for example, the notorious, but thankfully still-born, Manmohan-Musharraf formula (a Congress plan to demilitarize the Siachen glacier, and effectively hand over control of Pakistan-occupied Kashmir to Rawalpindi), keeping the two-nation theory alive in India for so long after partition, preventing an amicable resolution of the Ayodhya issue, painting Hindutva, and anyone even remotely associated with it, as a fearsome, existential threat, or posting ignoble tweets upon the death of a General — they all germinated from the same mindset.

And that mindset, not to put too fine point on it, is driven by diverse interpretations of Marxism. It is this which fashions new identities to force non-conformism, rejectionism, and the creation of hate objects.

It’s a kriegstat of the mind, forever at war with the rest of society, and constantly striving to prove oneself right and others wrong. This is the deracination bit.

The unfortunate part begins when those efforts come to naught. Disillusion sets in, but ego prevents the acceptance of reality. Ideology gives way to delusion. Democratically elected governments then appear unconstitutional. The majority becomes majoritarian. A hero becomes a villain.

And gradually, an arrogance of youth, which forced the original deviance, decomposes into the utterly helpless frustrations of middle age, when it becomes depressingly evident that hardly anyone agrees with your views.

This is the ressentiment bit, and is also probably why psychologists say that meanness manifests itself more viciously as people grow older; the cumulative effect takes time to build up and explode.

So we see that the unconscionable cussedness, expressed by certain sections upon the death of General Rawat, has a clearly definable ideological and psychological basis.

This meanness stems from a deep frustration, that rather than successfully forging an ‘idea of India’ based on a foreign dogma, for which they strove so long, it is instead a wholly domestic bunch of thoughts which has returned an ‘India of ideas’ to firm root, planted by popular will, and sprouting under the care of a seemingly-alien government.

But definition of the problem is still only half the battle won. This is because a proper, long-term solution also needs to include that ecosystem which enabled these people to comment so disparagingly about the General without fear.

They exist and function only because the political forces which created them are still extant. This is what normalises such meanness, and indeed permits them to get away with it.

Therefore, there is no point in getting angry, responding in kind, or by filing cases. If such mean behaviour has to be removed from society, then that process must begin by making those enabling forces irrelevant, in the one sphere where they retain power — the electoral domain.

That means it is still a long road ahead, before we are able to re-craft a humane order.

Nonetheless, for all the barbs that were flung, a winter sun has fallen over Brar Square cremation ground, and the embers of the pyres have gone cold.

The last post has been sounded, after field guns boomed 17 times in worthy tribute.

But that sacred salvation lamp lit at Kanchi shall blaze on undimmed, until the detritus of Adharma is exorcised from our midst by a firm truth: that meanness is psychopathy, and it has no place in our society.