The Royal Bengal Battle: The Task And Pitfalls Ahead For The BJP In The State 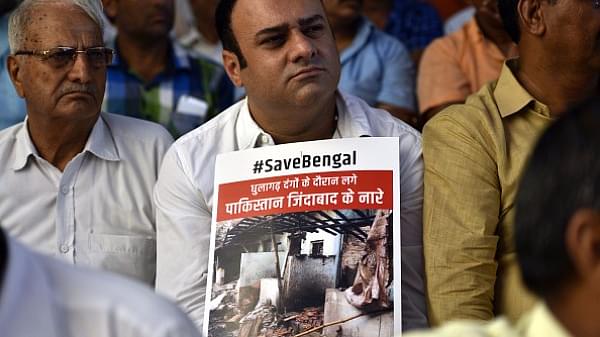 To ‘Save Bengal’, the BJP will have to work hard, yet smart. (Arun Sharma/Hindustan Times via Getty Images)

Winning elections is half the job done, maybe even the easier half. The BJP in Bengal would do well to keep this in mind even as it celebrates its impressive win in 18 seats of the state. The road ahead to achieve the goal of dislodging the Trinamool Congress from power in 2021 and take Bengal out of the rut that it has fallen into over the past four decades is an arduous one, and pockmarked by potholes and bumps that have to be negotiated very tactfully and with a lot of patience.

The first task at hand is to show the people of Bengal that the BJP is a party with a difference, and the onus of this lies on the shoulders of the party’s rank and file, especially the newly-elected MPs from the state. Apart from attending Parliament regularly and participating in debates, the 18 BJP MPs have to act in unison and raise issues concerning Bengal on the floor of the House.

The MPs have to, in their respective constituencies, ensure proper utilisation of Member of Parliament Local Area Development (MPLAD) funds and implement projects that make a difference to the lives of ordinary people. They have to help their constituents gain access to Centrally-sponsored schemes and must, above all, be accessible at all times.

A common complaint against most Trinamool MPs (that I learned while traveling across the state) was their prolonged absence from their constituencies after the (2014) polls got over and their inaccessibility. The BJP parliamentarians should guard against this and keep an open house as far as possible.

Yes, Trinamool goons and the Mamata Banerjee’s lackeys in the state administration will try their best to foil any good work that the MPs attempt, but perseverance and continuously seeking the support of the people while performing in a transparent manner are the keys here.

The newly-elected BJP MPs should also strive to bring in investments into not just their constituencies, but also the state. Given the comparatively easy access to the Union Ministries that they will enjoy, it will be possible for them to pursue the interests of Bengal and bring in more Central projects into the state.

They should ensure proper, efficient and fast implementation of all Central projects and schemes, including welfare schemes, and foil attempts by the Trinamool government to create hurdles in the implementation of such projects and schemes. And wherever and whenever such hurdles are created, expose these hurdles to the people of the state in a swift and effective manner.

It is also high time the BJP chalks out and announces a roadmap for Bengal. This is in anticipation of the 2021 elections (which could even be brought forward if the Trinamool government collapses due to its internal contradictions, rampant factionalism and deep faultlines) when the BJP is expected to make a determined bid for wresting office in the state.

The BJP has to frame a clear and precise roadmap to rejuvenate the state’s finances and industry. It has to provide a clear alternative to the people of the state. And more importantly, it has to sell this roadmap to Bengal’s long-suffering masses using effective communication tools.

Two years is a very short period and the state BJP has to get down to this task immediately. It can, perhaps, set up working groups of experts - not the self-seeking left-leaning ones in academia - on industry, health, education, economy, infrastructure and other important fields.

These groups can then provide inputs within a definite time frame (say three to four months) that can be examined by the party’s state leadership and incorporated in a 2021 vision document. Bringing out such a vision document is imperative for the BJP, especially to win over the naysayers and the sceptics who did not vote for the party this time. This vision document has to bring out the stark difference between the BJP and the Trinamool, whose only prescription for alleviating poverty is handing out more and more doles and freebies.

Another major task before the BJP in Bengal is to make significant inroads into the Muslim community. This will be a tough, but highly doable, task. It is not that Muslims totally shunned the BJP in the state this time. Many progressive Muslims, as well as Muslim women, have voted for the BJP. The trick is to highlight the party’s ‘sabka saath, sabka vikas’ development agenda and hardsell the message that the BJP is neither against, not in favour of any particular community.

That is why most Muslims fall prey to the false ‘BJP-is-communal’ propaganda, and it is necessary to defeat this. For the BJP, the support of Muslims who form nearly 30 per cent of Bengal’s population is necessary not only to come to power in the state but also to provide inclusive governance. This project will take a lot of tact, and has to be handled with sensitivity without ruffling feathers. But it is an achievable task, and within this short period of two years.

A major pitfall that the BJP should guard against is having an ‘open door’ policy for all the lumpens, criminals and undesirable people from the Trinamool who will flock to the BJP’s doorsteps for their own benefits.

These people defected from the Left to the Trinamool in large numbers when the latter came to power and it is they who are primarily responsible for the poor image of the Trinamool today. The BJP should resist the temptation of taking them in for immediate political gains, else it will slide down the same slippery slope as the Trinamool.

Not Give In To The Need For Muscle

Many will argue that given Bengal’s ground realities, muscle men are required to defeat the Trinamool’s ‘election machinery’ and prevent rigging by the Trinamool. However, as the just-held polls showed, effective deployment of central forces can foil even the most determined attempts to rig elections.

Yes, the Trinamool did, allegedly, manage to rig the polls in some pockets, but there is no reason why the Election Commission cannot learn lessons from those instances and make the deployment more fool-proof in 2021.

Also, the BJP has to desist from the temptation of seeking revenge for the attacks and atrocities the party cadres suffered at the hands of Trinamool rogues. Mamata Banerjee had, after coming to power in 2011, given the ‘badla noi badal chai’ (change, not revenge) slogan, but subsequent actions gave the lie to this altruistic proclamation. Trinamool cadres attacked not only the Left, but also the Congress, and the party thus earned a very bad name.

The BJP, despite the gravest of provocations, must not repeat this mistake of the Trinamool. This is not to say that Trinamool goons who committed or are committing atrocities on BJP workers should be allowed to go scot-free. It is the police who should be given a free hand to bring them to book.

Above all, the BJP must fine-tune and strengthen its communication machinery. This machinery played an important role in the 2019 Lok Sabha campaign, and now has to be buttressed to face the much bigger challenge of the 2016 Assembly polls. Social media has, once again, proved to be an effective tool to mobilise public opinion against the Trinamool. And this tool must now be sharpened in preparation for 2021.

The Trinamool, now desperate to ward off the BJP threat and retain power in 2021, will employ every trick in its arsenal. Attacks on BJP functionaries by Trinamool goons will increase exponentially and the party leadership may use the state machinery and the police to counter the BJP.

Countering this democratically will be the toughest challenge before the BJP, and the Union government has to send a firm message to the Trinamool government to uphold democratic norms.