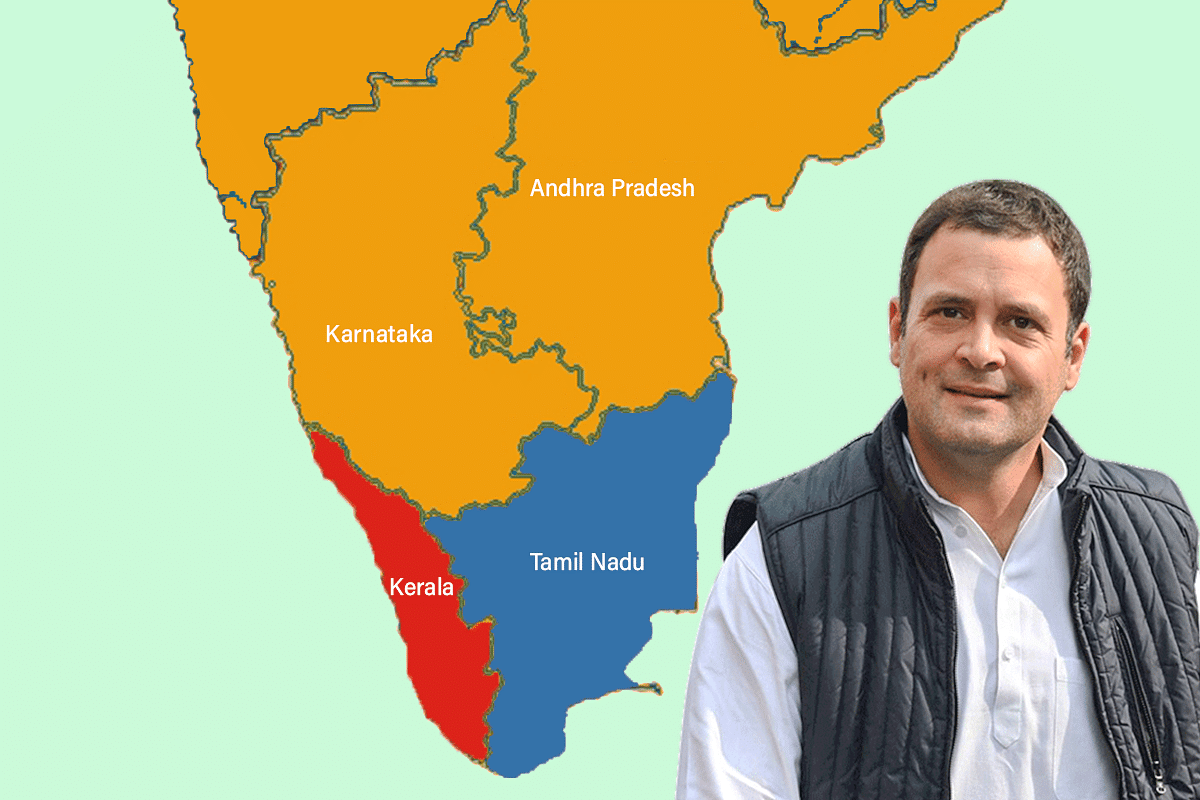 Rahul Gandhi's meeting with George Ponnaiah made for terrible optics.

Around a fortnight ago, Swarajya broke a curious story of a Catholic Church-driven protest, against the Adani Group’s Vizhinjam port under construction in south Kerala.

The strangest sight was of protesters flying yellow-white Vatican flags, while being led by priests in their traditional white, flowing habits.

The writer sensed that this massive Christian mobilisation, the most strident one seen in Kerala in decades, was political, yet failed to connect the dots.

A video clip of the meeting shows Ponnaiah, along with other church members, telling Rahul Gandhi that “Jesus is the real god… not like Shakti or this all…”

While Gandhi nodded his way through this epiphany, as if in agreement with what he was being told, the Internet and press promptly exploded in a ball of indignant fire.

How dare a leader of a national party meet someone with a sordid past like Ponnaiah, and worse, meekly nod his way through the meeting while deities of another faith were being openly rejected as false gods?

The political wisdom of meeting Ponnaiah apart, the exchange made for terrible optics, and will haunt Gandhi, the yatra, and his party for a long, long time to come.

Congress loyalists in mainstream media were reduced to cursing the organiser of this meeting. But it was too late. At the same time, Congress spokespersons tried to institute some damage control.

Adopting a sanctimonious line, they said that the whole purpose of the yatra was for Gandhi to listen to multiple voices.

So, they argued, the meeting with Ponnaiah actually exemplified Gandhi’s intent to hear from as many points on the spectrum as possible. Why create an issue over that?

This self-righteous unctuousness won’t wash because Ponnaiah is a known offender; his claims to infamy are diverse.

Last year, he reminded the Tamil Nadu Minister for Hindu Charitable and Religious Endowments during a public meeting, that no matter how many temples they renovated or consecrated, the minister’s party, the Dravida Munnetra Kazhagam (DMK), would win only because of Muslim and Christian votes.

He also used the occasion to say that he wore sandals to avoid contamination by a dangerous Bharat Mata; warned Hindus of an inevitable conversion tide; and prayed that Narendra Modi and Amit Shah be eaten by dogs and worms.

For this, Ponnaiah was arrested, booked, and released only after he had tendered an apology.

This is certainly not sane behaviour, but this is the sort of charismatic preacher who roams the deep south these days, and this is whom Rahul Gandhi chose to meet. Why he did so is answered by a map below.

In the past three general elections, the Congress and its allies managed to win back-to-back in only 24 seats.

Of these, 11 in Kerala, one each in Lakshadweep, Bihar and Meghalaya, and two in West Bengal, were won courtesy the minority vote alone.

And in Nalgonda, Telangana, although the minority vote is only around 6 per cent on paper, the combined Scheduled Caste and Scheduled Tribe population is 30 per cent.

As trite and repetitive as it may sound, the Congress is incapable of winning without the identity vote.

Now, the problem is that the Congress’s allies in Kerala left them to join the Marxists in 2020, and the Muslim vote in Bihar and West Bengal has shifted to the Rashtriya Janata Dal and Trinamool Congress respectively.

As a result, the Congress would be hard pressed to win even 10 of these 24 seats in 2024, and Rahul Gandhi’s chances in Wayanad constituency would come under question.

On the other hand, the party retains its popularity amongst sections of the Muslim and Christian electorate in some states, and the only way it can use this as a bargaining chip with its allies (for seat-sharing), is to show that it can mobilise this vote.

What Ponnaiah told the Hindu endowments minister is actually right — the DMK wins only because of the minority vote, and in states like Tamil Nadu, that bulk vote will go to the DMK only if the Congress says so.

Across the border in Kerala, spokespersons of the ruling Marxist coalition descended upon prime time in force, to belabour a bit of breaking news — Rahul Gandhi was set to meet the Christians protesting against Vizhinjam port.

Here at last was the proof of collusion between the Congress and the protests.

Rahul Gandhi is yet to meet the protesters as this piece goes to the press, but the fact that even pro-Congress media outlets have been running the story since Sunday (11 September), without denials from the party, is the best indicator we have that this is a put-up job.

Once again, the optics are terrible.

By meeting the protesters and the priests leading them, Rahul Gandhi is not just confirming that this Christian mobilisation has a clear political purpose — to woo the Christian vote back in full from the Marxists — but also tacitly approving the flying of a sovereign foreign flag on Indian soil.

It is now inevitable that his political opponents will accuse him of identity politics, and worse, also accuse him of ignoring the implications of a Vatican flag being flown on Vizhinjam beach merely because it belongs to the land of his mother tongue.

In fact, the Marxists have already started saying the first part loudly (they will keep quiet on the flag bit because they too need the Christian vote as much as the Congress does); that this yatra is primarily aimed at consolidating the minority vote under the Congress banner.

Many spokespersons pointed out that the yatra has only one brief stop in Uttar Pradesh, at Bulandshahr, while it will spend 18 days traversing Kerala, and skips its former stronghold of Andhra Pradesh.

This may be a case of the pot calling the kettle black, but nonetheless, this is, in fact, the new template for a Congress-led coalition at the national level: consolidate the minority vote, use that as a bargaining chip with its allies (particularly in Tamil Nadu which has 39 Lok Sabha seats), and ensure that Kerala remains a Congress bastion in the next general elections.

The party, and its first family, simply cannot afford to run the risk of losing Wayanad — not after Smriti Irani and the BJP turned Amethi constituency into a no-go area for it.

Thus, the formal rehabilitation of a bigoted pastor like George Ponnaiah, and Rahul Gandhi’s proposed meeting with the Christian protesters of Vizhinjam, has an electoral purpose, and there is nothing moral about it.

Now, this plan may look good on paper to the Congress, not least because it is the only sort of politics the party knows, but it fails to incorporate one aspect — the counter-consolidation it will certainly trigger.