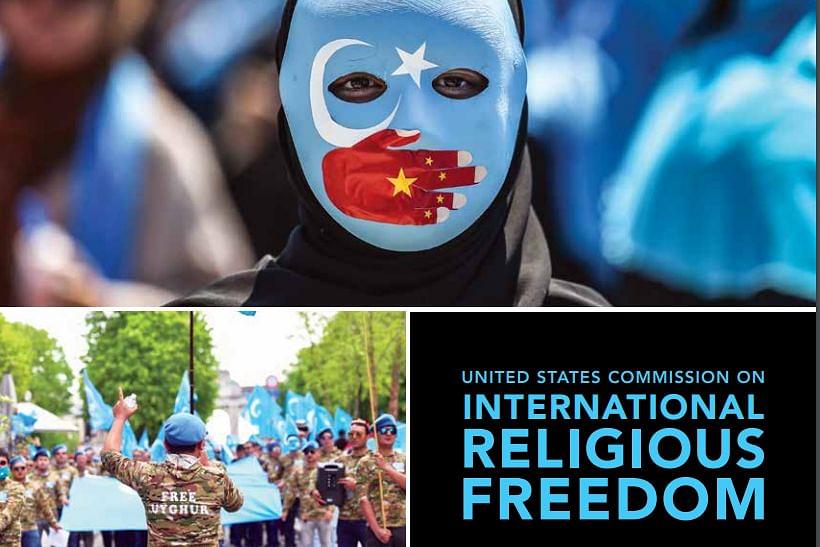 A poster of the US Commission on International Religious Freedom

The International Religious Freedom (IRF) report released by the US State Department last week seems to have got undue attention. This is a report that the Department has to prepare for submission to the US Congress every year after the US International Religious Freedom Act was enacted by the US in 1998 to ensure, as a part of US foreign policy, that the right to religious freedom was not violated in other countries.

The IRF report is a compilation of reports prepared by the State Department employees at embassies across the globe. The report is mainly based on news appearing in the media. Sometimes, the staff employed from the host country check with the authorities about the veracity of the news items but that is not a mandatory practice.

Every year, the Secretary of the US State Department releases the report in Washington and the respective country’s report is then released to the media. Reacting to the report released with respect to India, the Ministry of External Affairs has, probably correctly, said that the US has no locus standi to come out with such a report.

India and all those concerned over the IRF report just need to move on, ignoring it. What, however, has to be noted is that India is placed in Tier 2 in the report. This means, India is not a country of concern and New Delhi will not be under any undue pressure from Washington, though religious freedom issue could crop up in future Indo-US talks.

For an unbiased observer, the US preparation of IRF annually is curious because Washington seems to be trying to fit a single size footwear for all legs. In preparing the IRF, the US State Department doesn’t seem to appreciate the federal system prevalent in India or the ways other countries are governed.

India is a country of multiple states, governed by different parties. More importantly, the issue of religious freedom or incidents relating to its violation are handled by the police. Under the Indian constitution, police is a state subject and thus what is blamed on the country as a whole is, in fact, an issue that the concerned state government should have handled.

For example, the IRF refers to one Chakrapani Maharaj and says he had issued a statement that relief for the people affected by floods in Kerala should be confined only to those who don’t eat beef. The Maharaj doesn’t belong to Kerala and in no way has his statement had any effect on the distribution of relief to the flood affected. How then is this a concern for “religious freedom”?

The IRF report refers to certain incidents in which Christians were victims in Odisha, Telangana, Kerala and Tamil Nadu. Which parties govern these states? How much can the centre intervene in the functioning of the police in a state, especially in a situation where the police force has been politicised?

In another reference, the IRF says that the Bharatiya Janata Party (BJP) and Hindu nationalist groups had filed a complaint against the administrators of Sri Ranganathaswamy Temple in Srirangam, Tamil Nadu, for allowing a group of nuns to visit the site in May last year (2018). The US report says the complaint stated that the presence of nuns in their religious attire in the temple offended Hindu believers and mocked the temple’s sanctity.

The IRF report has missed the wood for the trees on this issue. One, why would nuns want to visit a Hindu temple at all, and one that is not a tourist site? Second, it overlooks the fact that the nuns had reportedly begun praying (presumably in their religion!), third the visit was on an auspicious day when many devotees thronged the temple.

Perhaps the nuns were innocent but has the IRF tried to get any response from the police or concerned officials? Why wasn’t the official’s response sought on the issue before slamming it as another incident of religious intolerance in a temple premise?

The IRF report refers to religious riots in Bengal in April 2018 (the incidents actually took place in March) in which four persons were killed. The report says that riots broke out after “Hindutva extremists taunted Muslims and used anti-Muslim rhetoric”. There are two discrepancies here. One, the report is misleading. It was the Muslims who attacked a group that took out procession on the occasion of Ram Navami because the procession was passing through an area dominated by them. Second, the report seems to justify the Muslim “reaction” excusing it on the grounds that “Hindutva extremists taunted Muslims and used anti-Muslim rhetoric”.

Another reference the report makes is of the Carnatic vocalist, O S Arun, withdrawing from the Christian Carnatic Music concert held at Chennai in October last year. The report says that the musician withdrew because a nondescript Tamil Nadu-based Hindu nationalists organisation called him and others taking part in the programme “traitors” of the Hindu faith.

The report doesn’t capture the entire controversy properly. It hasn’t discussed it either. The problem with the Christian Carnatic Music concert was about replacing references to Hindu deities with Christ in the Thyagaraja krithis, which is tantamount to appropriation, and as some said, even plagiarism. Does the US government support such sort of substitution if words praising Christ were placed in a song sung for a Hindu God? Did the US officials speak to Arun to find out why he withdrew?

If the IRF report had been fair, it wouldn’t have missed mentioning the killings of over 22 Hindus in Karnataka, particularly from the Mangaluru coastal region during 2017-18. Nor would it have missed out on how the Mamata Banerjee government has gone all out to appease the Muslims. The report however, refers to cow slaughters and killings related to them, little recognising the fact that some of the attacks have been either on cattle smugglers or by the smugglers themselves.

Over the last few years, the IRF reports have faithfully discussed anti-conversion laws and forced conversions to previous religion (ghar wapsi). They have repeatedly dwelt on how religious conversions have been restricted in seven states. The reports express concern on laws in some states that bar conversions of any sort, including consensual.

The reports however gloss over the fact that a majority of conversions happen in the country for monetary benefits. In Tamil Nadu, for example, there are instances where some people have been lured into converting to Christianity. The benefits are free rations and free education for children besides cash at the time of conversion. In places like Mayiladuthurai, employment in the Gulf is mainly the lure to convert Hindus to Islam.

The references in the reports are based on sources who have vested interests. Some of the sources quoted for the violation of religious freedom are Global Council of Indian Christians, Asia News, Catholic Media Outlet Crux and Evangelical Fellowships of India. Can the US State Department, which authors the report, vouch for the credibility of these sources?

The IRF report refers to a Right to Information reply to point out that communal incidents had increased in 2017 compared to 2016 but it ignores certain other facts mentioned in the same reply. One pertinent point made in the reply is that the maximum number of incidences — 943 — took place in 2008 with 167 people being killed and 2,354 getting injured. Why does the IRF report ignore things that happened during the rule of the United Progressive Alliance led by the Congress?

Curiously, the IRF report also mentions the renaming of Allahabad to Prayagraj and quotes activists to say it was intended to erase the contribution of Muslims. Those behind the IRF report have failed to understand the reason for the change in the name and probably need to look unbiased at Indian history.

The report points at problems non-governmental organisations (NGOs) face being unable to function from India due to the strict implementation of the Foreign Contribution Regulation Act (FCRA). This, according to IRF report, curbs religious freedom. What the US officials overlook is how foreign funds have come into India and how they have been misused.

Quite a few NGOs have got funds from abroad for religious conversions and irregularities have been committed with these funds. In some cases, particularly in places like Kerala, foreign funds have been used to lure people towards supporting Islamic State of Syria and Iraq (ISIS). By strictly implementing FCRA, the Indian government only seeks proper accounting from the NGOs. Does the IRF report want to imply that funds can be got from abroad and misused here?

Why doesn’t the IRF report make any mention of how foreign funds helped a few people and the church in Thoothukudi to launch protests to shut the Sterlite Copper plant? The plant was shut after the protests led to violence, resulting in the death of 13 persons in a police firing. The plant has been shut since 28 May last year. Some of the protesters had assembled in a church premise before taking out a procession on the day of the violence.

Why should churches and priests take interest in closing down an industrial unit? If the church is so concerned about the environment, then shouldn’t it take up the issue world-wide than confine it to a small city? Isn’t this one of the examples of how funds from abroad have been misused and the Indian government’s actions are justified?

The IRF report also refers to Scheduled Castes and Scheduled Tribes, who, after converting to other religions, are being denied reservation. The IRF report should have taken into account why conversion happens in the first place amongst these deprived people. Sadly, it hasn’t and thus it has got the whole issue wrong.

There are two other points worth noting with regard to the IRF report. One is the view of Tenzing Dorjee, Chair, United States Commission on International Religious Freedom (USCIRF). He has dissented from the IRF report that states religious freedom conditions in India continue on a downtrend. Conceding that India needs to address issues relating to religious freedom, Dorjee, who grew up in Karnataka and Himachal Pradesh, says India is an open society with a robust democratic and judicial system.

The second is the view expressed by Anurima Bhargava, USCIRF Commissioner. Bhargava says that the commission has not been given an opportunity to interact or visit in an official capacity for over a decade now. She says she looks forward to a dialogue and engagement with India. It is clear from this that India views the IRF report as an intrusion into its affairs.

As one hopes that Indian government will continue to view the IRF report with suspicion, one thing is clear: the US IRF report on India makes little sense.