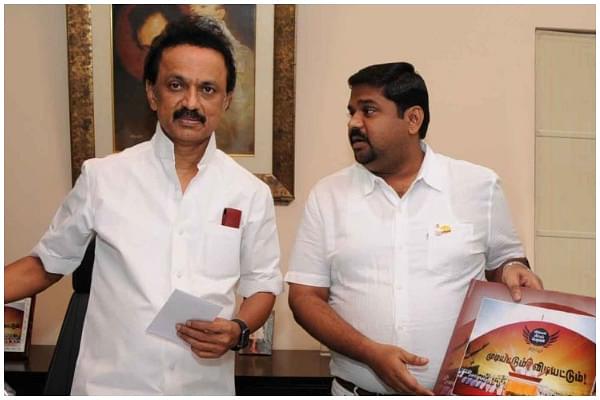 Later, Senthilkumar addressed the media during which he glorified Veerapan, also known as the forest brigand.

The Member of Parliament, in the guise of taking on the Pattali Makkal Katchi (PMK) leaders Dr P Ramdoss and his son Dr Anbumani Ramdoss, says Veerappan “had sacrificed his life and blood” for PMK.

He goes on to accuse the PMK founder and his son of not having visited either Veerappan’s burial site or met his family, though the brigand had worked for their victories in elections.

An objectionable part of his statement is that “whatever crimes he may have committed, Veerappan should have been brought before the law. We could have accepted any punishment that law could have given but nothing like that was done”.

He then goes on glorify the sandalwood smuggler saying he fled to the forest for people’s cause and did not earn anything for himself.

The primary reason for Senthilkumar to visit Veerappan’s place seems to be to help DMK president M K Stalin score brownie points over the senior Ramdoss.

The PMK and DMK are engaged in a war of words beginning from Stalin watching the Tamil movie Asuran, a movie based on recovering one’s land, last week. Soon after watching the film, Stalin tweeted it was “not a movie on recovering land but a lesson”.

S Ramdoss trolled him on Twitter saying “Hope he (Stalin) will hand over the lands usurped for constructing DMK’s official daily Murasoli building now that he has learned the lesson”.

The tweet led to a debate over the illegal occupation of 'Panchami' lands that were given to Scheduled Caste (SC) community in Tamil Nadu during the British period.

The issue had earlier been raised by Thol Thirumavalavan, the founder of Viduthalai Chiruthaigal Katchi and currently Chidambaram Lok Sabha constituency representative. This was before Thirumavalavan entered into an alliance with the DMK for the Lok Sabha polls.

Stalin responded by saying that the land on which Murasoli building has been constructed belonged to a private individual and wasn’t a 'Panchami' land. He also challenged Ramdoss to prove his allegations and offered to quit politics if they turned out to be true.

It was during this controversy that the Dharmapuri MP visited Veerappan’s village. It could have been an effort to belittle the PMK and, in turn, be in the good books of his party leader.

But from the time he was nominated to contest from the Dharmapuri Lok Sabha constituency, Senthilkumar has made his intentions clear that he is out to undermine the influence of P Ramdoss and his son Anbumani Ramdoss in Dharmapuri district.

In an interview with Win TV, he questioned the contribution of Anbumani Ramdoss to the constituency as an MP. Senthilkumar, who calls himself an atheist, has been with the DMK for about five years now.

During the elections, he didn’t hesitate to tell the voters that he belonged to the Vanniya Gounder caste that has been staunch supporters of the PMK. Sandalwood smuggler Veerappan was also a Vanniya Gounder.

He claims that his family has broken caste and religious barriers with his mother coming from outside Tamil Nadu. Senthilkumar says he and his sister have also broken religious barriers but claims he used the caste name only to create an awareness against identifying people with caste names.

On the other hand, the MP says he did it as a part of his strategy to take on Anbumani Ramdoss in Dharmapuri and he is the “son of the soil”.

When confronted on his visit to Veerappan’s burial site, Senthilkumar has justified it saying that Veerappan’s wife Muthulakshmi had campaigned for him and since she sought his presence, he visited the place.

There are two problems with what the Dharmapurai MP has done. One, he shouldn’t have publicised his visit to Veerappan’s burial site if he was indebted to Muthulakshmi’s support for him during the elections.

Second, as an MP and also a citizen of the country, he has made an irresponsible statement. His statement is irresponsible because either he is unaware of Veerappan’s background or is trying to mislead the people.

Veerappan was a ruthless smuggler-cum-brigand and an outlaw, who smuggled sandalwood, poached elephants and took people hostage to extort money in the Western Ghats forests he operated — from Kerala to Karnataka via Tamil Nadu.

The sandalwood smuggler had killed over 30 police personnel belonging to Tamil Nadu and Karnataka besides leaving hundreds of men injured for a lifetime.

He even shot dead Border Security Force (BSF) personnel, who were engaged in special operations to catch him. No one can easily forget the way he killed 21 police personnel at Palar using improvised explosive devices as landmines.

Veerappan also roped in banned Lankan Tamil outfits and kidnapped many, including the late Kannada matinee idol Rajkumar, for ransom. At one point of time in the mid-1990s, he was India's most wanted criminal.

Senthilkumar is misleading or ignorant when he says Veerappan was not brought before the law. Various efforts were made to make the forest brigand surrender to the Tamil Nadu government.

Veerappan’s main demand to surrender was that he should get treatment at par with the late bandit Phoolan Devi. Tamil Nadu officials told him that it could only happen during the process of law and after he surrenders.

But he never relented on that condition. He simply wanted to come out of the forests and just walk free in the state without going through any process of law. He finally met his end in 2004.

The DMK MP is also wrong in saying Veerappan didn’t make money. Top officials, who headed the joint special task force to nab him, have told this writer how the brigand had crores of rupees in cash with him that were hidden in plastic sheets across the region where he operated.

Besides, he had killed hundreds of elephants for their tusks and that also had got him ample money flow. Veerappan got his rations only because he paid the shop keepers a higher price for the supplies.

PMK reportedly had links with the forest brigand. Political analysts point out that when PMK chose to go it alone in 1996 Tamil Nadu Assembly elections, the party won only in areas like the Pennagaram, Tharamangalam and Edapaddy which were strongholds of Veerappan.

S Ramdoss has denied any link with the bandit, saying there were deliberate attempts to tarnish the PMK's image.

It is a sad commentary that the MP of a party that claims to be the third-largest in Lok Sabha makes a factually incorrect statement in supporting a sandalwood smuggler, who was not just an outlaw but a ruthless criminal too.