Three Reasons Why MASUKA Is A Bad Idea 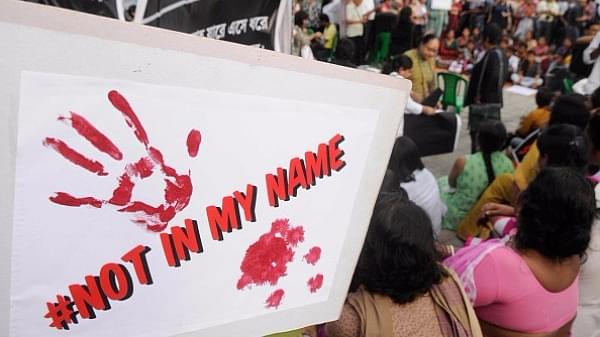 Citizens protest named ‘Not In My Name’ against lynching incidents in Kolkata, India. (Samir Jana/Hindustan Times via Getty Images)

Maanav Suraksha Kanoon, or MASUKA, is a law being proposed by the National Campaign Against Mob Lynching in response to the spate of lynching incidents that have come to light in the last year. The proposed law aims to protect the vulnerable and rehabilitate the victims, while ensuring that the perpetrators are punished.

But, is MASUKA really the answer to mob lynchings? Here are three reasons why such a law would fail to resolve the problem.

First, the law is redundant; there might not be a specific section defining and punishing lynching, but reading sections 302, 326 and 149 of the Indian Penal Code makes it clear – “lynching” is an illegal act.

Swara Bhaskar says “Lynching does not find mention in the Indian Penal Code. No particular law has been passed to deal with lynching.” She is right, but she fails to consider the fact that lynching is already a criminal act. Just because a particular offence has not, per se, found a mention in the Penal Code does not mean lynching is not an offence. MASUKA thus deals with a set of offences that are already penalised. A special law to combat “lynching” would be just another statue that lies dead in the books or, worse, an instrument utilised by the law enforcement agencies to browbeat unsuspecting citizens.

Take the example of the Scheduled Caste and Scheduled Tribe (Prevention of Atrocities) Act; it is more or less a redundant legislation that can easily be misused. (Read Madhu Kishwar’s article on the Atrocities Act.) By this argument, MASUKA is a sham that will achieve nothing.

Second, the law is badly drafted, has provisions that make no sense and some sections read like lectures on propriety than legislation (Section 5, for example, goes thus: “It shall be duty of every police officer, in-charge of a police station to take all reasonable steps to prevent any incident of lynching, including its incitement, commission and possible spread.”) There are so many loopholes and provisions that can easily be misconstrued or misused by law enforcement agencies.

Also, one must not forget that the police would have additional power to harass and intimidate citizens. (Section 3, clause 1, sub-clause (i) states that one of the “duties” of a police officer is to “make all possible efforts to identify instances of dissemination of offensive material or any other means employed in order to incite or promote lynching of a particular person or group of persons.” )

I could go on (for example, the statute creates yet another hierarchical judicial system to try cases of lynching), but I can feel my grey cells burning up in pain every second I’m forced to spend reading the legislation.

Third, even if we are to ignore the first two glaring problems with the enactment of the draft bill, one needs to remember what caused this hullabaloo and the drafting of this proposed legislation: the lack of rule of law in the country. This is not a problem that can be solved by this legislation, or any other, for that matter – because the problem is not the law, the problem is the enforcement of the law. And the primary law enforcement agency, the police, is a mess.

As R Jagannathan points out, “when the police will not enforce the law, or enforce it only when it suits the party in power, mobs – or rogue elements – will sometimes take law into their own hands.”

“The only way to fix the problem of mob justice is to start with police reform,” he writes. And that is precisely the problem that needs to be addressed. Lynching and other acts of mob or thuggish violence will automatically start to dip if we bring about lasting change in law enforcement. A new law will only be relegated to the dusty pages of law books, and nothing much will come out of it ultimately.

The unabridged version of this article was published originally in the writer’s blog, Chhit, and the excerpts here have been reproduced with permission.

Roots Of Mob Violence Lie In Lack Of Police Reform, Not In BJP’s Rise To Power

Is ‘Lynchistan’ The Result Of Copycat Effect, Bad Journalism, Or Both?