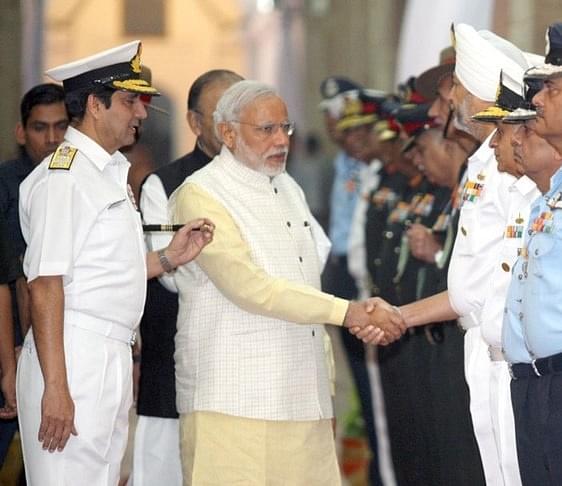 PM with the Indian defence forces

The stunning victory of National Democratic Alliance (NDA) in 2014 rested on its promise of reforming India, and Prime Minister Narendra Modi has repeatedly committed himself to this objective.

There has been discussion ad nauseam on administrative, police, judicial and economic reforms ever since India got independence. Is the NDA government also going through the same path? If yes, then the results are known.

The United Progressive Alliance (UPA) couldn’t deliver, possibly due to the avarice of its political leadership – which culminated in massive scams.

NDA-II has surely performed extremely well on transparency and honesty. However, there is a sense of exasperation expressed privately by leaders, of being let down by the bureaucracy and feeling hurt by hidden ‘landmines’.

We have a raksha mantri working overtime to see that the value gets delivered to the soldier in time, and we have a pradhan sewak, who is yet to take an hour off since he assumed office after the most grueling campaign we have seen in decades.

Read this to find out the availability of electricity and its cost. Every time one takes a look at this, one gets amazed at the story which we usually miss when we complain about blackouts or the cost of electricity.

For the first time, there is a special focus on– toilets for the girl child, smokeless kitchens, and not just doles. It is certain that the government is committed to a more difficult path of ‘true reform’. Surely, a new leaf is being turned.

The Prime Minister’s message to the bureaucracy

The PM has repeatedly criticised the red tape and bureaucratic ways that engendered corruption and never allowed a common citizen to be identified as a stakeholder in governance. By calling himself pradhan sewak, he sent out a clear message to the bureaucracy that they are not the modern-day aristocrats.

Within a fortnight of assuming power, activity seen in golf courses and clubs shifted to offices and that too by 9.30 AM. There was no fuss, just well-intentioned message that was delivered to affect this change. Also, the corridors and staircases were cleaned up and the practice of leaking documents stopped. A tweet brought action from the ministers ­ – no less.

So the country is indeed changing, but what is being missed out?

The emotional fight of veterans for one rank one pension (OROP) was not just about money. The country was treated to something more precious to the men in uniform, izzat (honour).

The nation feels immensely proud of its armed forces. This respect, which men in armed forces get, comes from their grit, toil, bravery and commitment to the country – many times at the cost of their lives. These highly trained, articulate and focussed leaders, who despite the most deadly arsenal at their command, in eyeball to eyeball situations, keep their nerve and peace prevails on our borders – never allowing escalation.

But what happens to such highly-respected leaders? Most of them retire prematurely. In 2015, this figure was more than an officer a day, according to a report submitted by the raksha mantri in Rajya Sabha. Why can’t these leaders in whom the nation has invested their love, affection and money, and who in turn have proven their mettle and showed they are worthy of the country’s affection, be considered for civilian positions?

It is amusing that military commanders aren’t considered fit to be leaders in civil administration including paramilitary forces or police. People who struggle to pass an exam are rated higher than those who not only pass a tough entrance test but earn their spurs by facing danger and risking their lives, all through their working life.

The armed forces, and for that matter Indian Railways, function effectively despite the pathetically ailing condition the nation finds itself in, in terms of its governance architecture.

There is already a scheme for getting people from forces into the civilian bureaucracy. Clerks and peons from armed forces are much liked and can be readily found, but why don’t we find enough senior officers?

One big reform the NDA should look at is to improve the level of governance by opening positions right from village level to the centre to pensioners from the armed forces. The subordinate cadre of armed forces can be redeployed to handle village and tehsil-level work, with officers being brought in with re-skilling in land revenue laws as district magistrates, and being allowed to grow in the cadre. The claim of such people, who have sacrificed so much for the country, is much higher than the unionised and better networked administrative staff, and the nation would fully back such a move.

Similarly, as officers retire, they should be considered for lateral induction at appropriate levels. As the total cadre strength of armed forces and civilian bureaucracy is known, such an equation can be easily worked out. Thus, a balance can be readily arrived at. This opportunity can be availed to address an important issue inherent in the demand of izzat, i.e. making officers and staff of armed forces with equal number of years of service in more hostile conditions junior to their civil counterparts.

So, a more focussed home secretary from armed forces would become a possibility, who would like to focus on real substantive issues. Similarly, for ministries like external affairs, getting officers from armed forces at leadership positions all the way up to secretary level would bring a sense of purpose and poise. The oft repeated angst of armed forces in repeatedly losing leverage with the neighbourhood can be best understood and addressed by the leaders drawn from the armed forces. Are we not trusting them for winning the battle of perception in Kashmir and North East?

Time right for this institutional reform

Former defence minister George Fernandes packed off his babus to Siachen to make them understand that the snowmobiles are not playthings for the soldier posted there. Similarly, the PM has personally visited battlefields, earning affection of the soldiers.

The time has come to make basic structural changes now and this would be truly a ‘big institutional reform’.

All the major initiatives in the country are led by the Indian Administrative Services (IAS) officers – execution, management, ideation – which is a bit alarming. The standard modus operandi now is– form a task force, outsource the thinking part to consultants, get industry associations to give ideas and present a report as an expert – so it doesn’t matter if you were heading fisheries and but went to present a report on advanced space research.

Even the report on education reform has been authored by a committee, which had only one educationist and the other three members were retired IAS officers. Indian Police Services (IPS) officers have been depended on for handling most volatile law and order situations – but they can’t be aspirants for becoming home secretaries.

When faced with persistent disease, despite changed medicine, a time comes to examine the needle for the delivery of the medicine. The recent campaign by a few IPS officers against the perceived advantage the IAS is set to get in the Seventh Pay Commission is indicative of the stress and frustration, which is swelling up. This post by an Indian Revenue Service (IRS) officer and the comments which follow is an interesting reminder of the need for reform.

If the country as a republic has to serve aspirations of its citizens, it must get rid of structures, which promote rent-seeking. Zamindars are passé, modern rent-seekers are the bureaucrats, most of whom fail to add any value and only remain keepers of status quo of diminishing standards of governance. Why else should the PM, from the ramparts of Red Fort, on his maiden Independence Day speech, call for provision of toilets after nearly seven decades of independence?

Let’s take a quick look at the achievements in different sectors, which make India proud – space, nuclear, missiles, metro rail, India’s green and white revolution – these were all led by the experts. While the country’s governance came to a grinding halt under UPA’s policy paralysis and defence preparedness hit abysmally-low levels, one found Indian Railways constructing, manufacturing and running successfully.

Another example would support my point – electricity reforms were brought in by RV Shahi, a technocrat brought in by NDA-I, to set right the mess in the power sector.

Maximum governance clearly needs grooming of experts to take on the mantle of leadership – right up to secretary level. Present structures just prevent competition to IAS. It’s time to get better leadership to deliver more robust and meaningful governance.