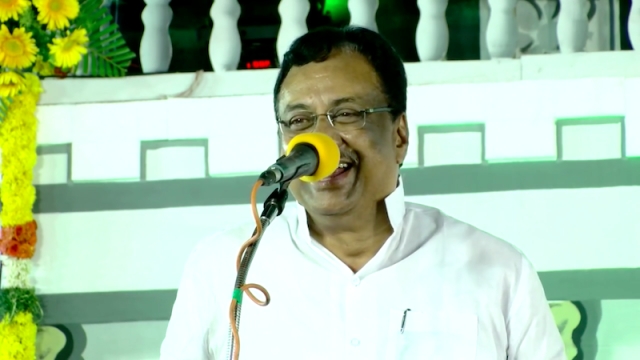 Elangovan is also bowled over by Rajiv Gandhi’s complexion. Will Parliament or media howl in protest now?

A speaker commences his comments on the foreign trips of Prime Minister Narendra Modi thus:

“The Prime Minister has made eleven foreign trips in the past ten months, Even yesterday you could have seen. He was going to Paris. He runs to attract the people. You see him climbing on the stairs to the air plane. He looks like a gorilla climbing the tree.” (claps).

The speaker laughs and then makes a movement imitating a gorilla. Then pleased with the grotesque act, he continues:

“If people liked the movements of Nehru, he was a born handsome person. He was the light of Asia. Indira Gandhi was a brave woman. Rajiv Gandhi, as told earlier, was the owner of a fair red body and beautiful smile. People will admire their beauty and enjoy their actions. But if people who look like gorillas start doing the same gesture (whistle) can the nation tolerate my dear comrades?”

The speaker was no street-level rabble-rouser or even a middle-level functionary. It was EVKS Elangovan, who was handpicked by none other than UPA chairperson and Congress president Sonia Gandhi and appointed as the president of Tamil Nadu Congress Committee on 31 October 2014. Note the racist slur here. The dynasty is born with ‘innate beauty’. To note that Indians are typically bewitched by the complexion of the dynasty’s skin is supposed to be sacrilege. In contrast, Narendra Modi, a man from a humble background can be compared to a gorilla!

Prior to the Lok Sabha election, another Congress leader, Mani Shankar Aiyar had derided Modi, offering him the job of selling tea at the Congress meeting.

It is not an accident. Whether it is Elangovan or Aiyar, they resort to derogatory slurs. The idea of Nehru-Gandhi dynasty that is so central to the very existence of the Congress is one that considers birth-based ability to lead to be axiomatic. And this is justified in the collective psyche of its rank and file. The presumed superiority of the white/fair skin rules their subconscious. Note that Elangovan was not simply saying that Rajiv was fair and red and, hence, beautiful. He was actually quoting the previous speaker Thirunavukarasu, a known party-hopper and now a leader in Tamil Nadu Congress.

So when Union minister and Bharatiya Janata Party (BJP) leader Giriraj Singh asked whether Congress would have accepted a dark-skinned woman as their leader, he was more than right. He was not at all casting a racist slur on the Congress. In fact, he was exposing the hidden racism that formed the very substratum of dynastic power structure in the age-old party of India. Perhaps the media too has not outgrown the Nehruvian racism where it branded Singh’s remarks as a “racist slur”. The supposed fourth estate of our democracy never bothered to highlight the really obscene, derogatory, and racist remark by the Tamil Nadu Congress Committee chief handpicked by Sonia Gandhi.