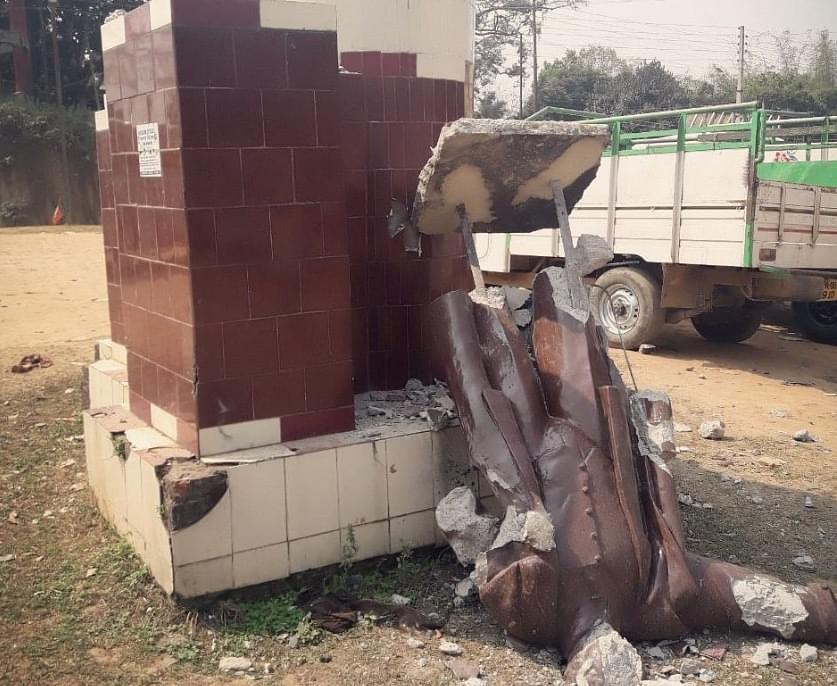 The broken Lenin statue at Sabroom Motor Stand in Tripura.

For the past four decades, Sabroom had been a seemingly impregnable citadel of the communists. This under-developed and poverty-ridden small town in the southern tip of Tripura has been under the firm grip of communists since 1977 and has been represented in the 60-member state assembly by the Communist Party of India (Marxist) or CPI(M) for the last eight terms. And like everywhere else, Marxist rule over Sabroom has been oppressive.

Which is why, when the results of the just-concluded assembly polls were announced last weekend (3 March), the people of Sabroom town, which lends its name to the eponymous sub-division in South Tripura district and lies along the Feni river that separates India and Bangladesh, erupted in joy. The boisterous celebrations on the dusty roads of this town were reminiscent of the festivities that erupted in the satellite states of the erstwhile Soviet Union after the fall of the Soviet-backed communist dictators there. The simple and long-suffering townsfolk of Sabroom have also celebrated the end of Marxist tyranny.

The most visible symbol of this tyranny was the shiny copper-tinted statue of Vladimir Lenin, the primary architect of the infamous ‘Red Terror’ in which an estimated two lakh people were killed in Russia. This statue of one of the worst mass murderers in recent history occupied pride of place in the Sabroom motorstand, the main town square and the busiest area of this town of some 9,000-odd residents. It was as if Lenin, with his stern visage, was looking on approvingly at the cruelties perpetrated on the hapless townsfolk by practitioners of his regressive political ideology. And while the statue stood in shining splendour, everything around it was rusty, muddy and in state of disrepair and decline.

The celebrations of the people of Sabroom at the electoral extermination of their tormentors continued for three days and ended with the demolition of the statue of Lenin on Tuesday morning. It was a spontaneous act in which about 30 ordinary people gathered at the motorstand and, with iron rods and other implements -including, quite appropriately, hammers and sickles - started knocking down the statue from its pedestal. That their act found total endorsement from all residents of this town was evident from the applause and cheers that greeted the fall of the statue from the pedestal.

Such was the cheer that a person who owns a sweet shop in the vicinity rushed to the spot of the demolition and started distributing rasagollas and other sweets from his shop to the assembled crowd. Another grocery store owner distributed chocolates and candies to the cheering crowd. Firecrackers were burst and a few ladies greeted the demolition of the statue with ululation and by blowing conch shells. People hugged each other and raised slogans against the Marxists. Those at the receiving end of Marxist savagery and torture punched their fists in the air and mouthed expletives against some leaders of the CPI(M)’s Sabroom sub-divisional committee.

Many of those who had celebrated the fall of Lenin’s statue and dubbed it as a symbolic act signalling the end of Marxist repressive rule had been threatened, tortured, maimed and been subjected to various other brutalities by CPI(M) cadres. One of them was Gokul Debnath, 47, a resident of the incongruously named Darjiling Palli area in Sabroom town. Gokul has been a staunch Congress supporter and has had a very heavy price to pay for his political leanings. Gokul, a father of two, was a trader in spices and food grains and used to run a small shop in his locality.

“My father was also a Congress worker and while in college, I joined the Congress students’ wing. I was warned, threatened and then assaulted by local CPI(M) cadres. I left student politics but my association with the Congress continued. In 2001, I set up a small shop which became the sole means of sustenance for me, my wife, widowed mother and two kids. In the 2003 assembly polls, I was made an election agent of the Congress candidate. I was warned by some neighbours who were CPI(M) activists and advised not to campaign or work for the Congress. But I ignored their warnings. The day after the results were announced, my shop was vandalised by CPI(M) workers, all goods taken away by them, and they ransacked my house too. The police refused to take my complaint. I was ruined financially and became a labourer loading and unloading goods at the market. Now, when I see my tormentors, those who are responsible for my present situation, being thrown out of power, why should I not celebrate. It was because of them that I have not been able to put my son in college and my entire family has suffered so much,” said Gokul.

Bijoy Malakar, 38, was banished from Sabroom in 2003. “I was always a supporter of the Congress and used to campaign for the party in local elections. I was known for my oratory. In the 2003 assembly election campaign, I was assigned a key role as a speaker in campaign rallies. I was warned by many not to criticise the CPI(M) so strongly. I did not listen and named CPI(M) leaders threatening me in my speeches and complained against them to the election authorities too. Two days after the results were declared, CPI(M) cadres came to my house, ransacked it, assaulted me and took away the new television set I had bought. They had warned me against lodging a police complaint. I defied them and went to the police station. They then assaulted me again and I spent one whole month in a private hospital in Udaipur (a major town in Tripura, about 83 kms northwest of Sabroom) with fractured ribs, a fractured ankle, concussions and damaged retina. While I was in hospital, they sent word that if I dared to return to Sabroom, I would be killed. My parents and siblings pleaded with me to stay away from Sabroom. I was allowed to visit home only during festivals and the Bengali new year. I sustained myself doing odd jobs all these years in (state capital) Agartala.

“Now that the communists have been dislodged from power, I am back in Sabroom. And I cannot be expected to be forgiving towards them. I will exact my revenge. It is fitting that the statue of Lenin, who used to be worshipped by these bloodthirsty and savage communists, has been demolished. Lenin inspired these savage brutes and his statues have no place anymore in Tripura,” said Bijoy, who is now planning to join his family business.

Sabroom, despite being ruled by Marxists for the last four decades, is a picture of poverty, despair and neglect. And a town which, like the rest of Marxist-ruled Tripura, was enveloped in fear and terror. According to the CPI(M)-run Sabroom Nagar Panchayat’s own figures, 2049 families (or 95 per cent of the town’s total population) fall in the BPL (below poverty line) category. More than 200 households in the town (of a total of 1,800 households) are without any electric connection and nearly 250 houses don’t have access to potable water supply. Of the 1800-odd houses, 1245 houses (nearly 70 per cent of the total houses) are ‘kutcha’ (made of mud and bamboo) structures and 975 (nearly 55 per cent) without sanitation and proper toilets. It is no surprise that all the ‘pucca’ (concrete) houses in the town belong to CPI(M) leaders, workers and supporters.

Most of the roads in the town are unpaved and none of the drains are covered. Sewage spills out on the muddy and cratered roads and a vile stench pervades the town at all times. On paper, the town has a 75-bed hospital that is supposed to cater to the entire sub-division. In reality, there are only 18 functional beds in the hospital that is run by two doctors (one of them is absent most of the time) and a few nurses and non-medical staff, all of them CPI(M) supporters or members. None of the four primary schools have tables and benches, and their classrooms are in shambles. Locals say teachers, again all of them CPI(M) cadres or supporters, barely ever bother to take classes. The state of the three higher secondary schools in Sabroom is no better. The town has one college which has a long and dubious history of campus violence perpetrated by the SFI, the student’s wing of the CPI(M). Two decades ago, the college principal and a few teachers were brutally beaten up by SFI members for accepting the nominations of some Congress-backed students in the students’ union elections. Two of the teachers were hospitalised and along with the principal, left the town.

“Sabroom has been ruled very brutally by the CPI(M) all these years. Such was the fear that none would dare criticise the party (the CPM) even mildly. Many were afraid of voicing criticism even within the four walls of their homes. The communists were so notorious that they used to even encourage school and college students to report on their parents and relatives. Many incidents of children reporting about their relatives’ and family members’ anti-communist views have happened and people have suffered a lot for their political leanings. The communists used to implement the carrot the stick policy, handing out little favours to loyalists and severely punishing political detrators and rivals. The few jobs available were given only to party loyalists. Those not supporting the CPI(M) or with known anti-CPM views and loyalties were not allowed to run businesses, drive rickshaws and auto-rickshaws and denied means of sustenance. Thus, people were forced to be like robots and support the CPI(M) out of fear. Not doing so used to invite harsh retribution. Many were also banished from Sabroom for being supporters and workers of the opposition party (the Congress).

“Now that Marxist rule has ended, the people have overcome their fear and dread of the communists and are defying them. This defiance is taking many forms, from mouthing anti-communist slogans and verbally abusing their communist tormentors in public to demolishing the statue of Lenin. It is the masses who are now rebelling against the Marxists who had terrorised them for so long,” said Manabendra Biswas, a former Congress leader who is now with the Bharatiya Janata Party.

There are hundreds like Bijoy Malakar and Gokul Debnath who want the Marxists to pay for their brutalities. “We were severely oppressed and we want closure now. That closure will come only when these devilish communists suffer the same fate that they inflicted on us,”said Debnath.

These sentiments find widespread resonance in Sabroom, whose residents are now emerging from the dark decades of oppression and celebrating the experience of being free citizens once again. The demolition of the statue of Lenin by them on Tuesday was but just a celebratory act that is widely endorsed by the simple folk of Sabroom who now look forward to peace, prosperity and freedom from fear.