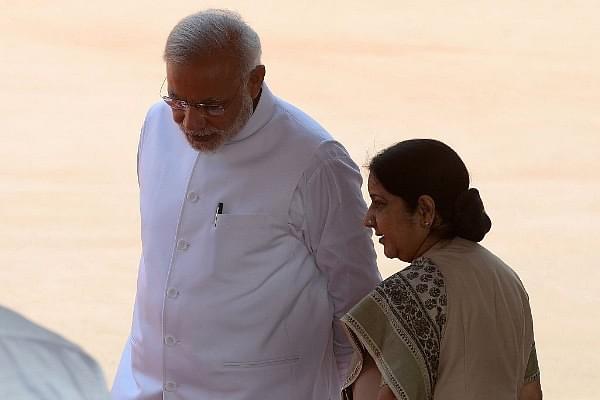 It must be remembered that Sushma Swaraj was once a strong contender for the post of prime minister. (PRAKASH SINGH/AFP/Getty Images)

In the old days, the only way to counter biased or mendacious reporting was to write angry letters to the editor. The letters were usually consigned to the dustbin, causing erstwhile news media personnel to feel like royalty. They could say or write whatever they pleased without any consequence. However, social media has been a great leveller, and has empowered the regular citizen to question and counter what they read or hear. To keep up with this development, mediapersons caught being biased or peddling lies have a standard method of reaction.

First, they highlight abusive (even unrelated) reactions and then rush to claim victimhood. Their falsehoods, biases, and mistakes are forgotten, as their victimhood affords them great accolades in the echo chambers. They even receive international recognition and can be part of “think tanks” that lament the fact that democracy in Narendra Modi’s India is under attack. Pecuniary gains may follow with book deals, speeches, and appearances.

Sushma Swaraj has been a leading figure in the Bharatiya Janata Party (BJP) for many decades and has many records to her credit – youngest ever cabinet minister in the country at 25, the Haryana state president of the Janata Party at 27, and the first woman spokesperson of a national political party in India among others. She also has, to her credit, held multifarious positions such as first female BJP chief minister, Union cabinet minister, general secretary, party spokesperson, leader of opposition, and external affairs minister. Swaraj is also Indian Parliament's first and only woman Member of Parliament honoured with the ‘Outstanding Parliamentarian Award’.

A few weeks ago, an interfaith couple claimed that a passport officer had insulted and shamed them during the course of their interview for passports. The media attacked the passport officer for ‘bigotry’ and predictably linked it to the ‘growing intolerance’ in Modi’s India. The Ministry of External Affairs (MEA) then swung into ‘remedial’ action, transferred the officer, and granted the couple a passport instantly, without any background checks.

Then the truth began to emerge that the couple had supplied falsified documents while eyewitnesses stated that the passport officer had not been rude at all. In fact, the rudeness was on the part of the couple. There was news of the eyewitness being kidnapped as well. Social media was one of the driving forces behind this truth coming to light.

As the head of the MEA, the least we could expect was a statement from Swaraj on the matter, and the hope was that she would initiate a rapid but thorough investigation and then take suitable remedial actions. But alas, Swaraj was taken in by the version of the ‘victim’, without verifying facts.

Detractors of the Bharatiya Janata Party (BJP) in the media and even members of the various opposition parties were sympathetic to the minister. Some even said that Swaraj deserved it for being in a party that actively supported ‘abusive trolls’.

The External Affairs Minister then went on to block many who questioned her, which is rather irresponsible, considering she uses her Twitter account as a channel to help distressed Indians abroad. Now by virtue of her strange action, is the MEA subtly saying that it won't help those who question it?

Strangely, Swaraj also unblocked a troll who consistently attacks Prime Minister Modi and the BJP. On Twitter, a blocked individual becomes invisible to the blocker. To unblock an account, the blocker has to access the individual profile and unblock it. Swaraj has over 11 million Twitter followers. Isn’t it fair to ask her why she specifically chose to unblock this anti-Modi individual?

Days later, she conducted a poll about the hateful tweets and condemned abuse. No fair-minded person can support vicious abuse. What did she achieve by stating the obvious? Swaraj has been on Twitter since November 2010, and like any other public figure, she surely has been at the receiving end of abuse. She has clearly ignored such abuses thus far – so why make it public now? Clearly, something has changed that has made her think it was a good time to go public with her ‘trolls’.

It has to be remembered that Swaraj was once regarded as a strong candidate for the post of prime minister. The way things work in the political establishment is that people are usually given their due if they wait for their turn. It was the case with Atal Behari Vajpayee, after which Lal Krishna Advani, perhaps, thought he was next in the queue. And so did Swaraj. But the Modi wave was a game-changer, shattering many dreams in the BJP. It is erroneous to think of the BJP as one big happy family, as the likes of Yashwant Sinha and Arun Shourie have made their frustration public. There have been many who resent Modi’s ascendance to power, but have chosen to stay silent. Perhaps, Swaraj has support among the anti-Modi faction in the BJP.

The question now is, is Swaraj throwing her hat in the ring for the supreme post? Clearly, she cannot challenge Modi at this stage. But she does know that many allies of the BJP in the National Democratic Alliance have expressed their disapproval of Modi as a leader. If the BJP were to fall short of the magic number of 272 in the 2019 Lok Sabha election, perhaps she may emerge as an ‘acceptable face’ of the leadership.

It might not be wise to challenge the status quo right now, but every action has to be seen in context. Her calling out ‘trolls’ may be seen as rebelling against Modi, and that may just be enough. She doesn’t even have to win an election for her to be catapulted to the top. In the last government, did we not have a prime minister who was not even elected by the people?

This writer suspects Swaraj will be back maintaining silence for some time now and wait till 2019 pans out before she makes her next move. She also knows that if she is sacked, she can play the victim card and garner the sympathies of those who feel the BJP is becoming a one- or two-man show.

However, this apparent rebellion doubtlessly makes the Modi government look bad. The failure to remove poisonous weeds can result in upsetting the whole apple cart, and has to be nipped in the bud. For this, the Prime Minister cannot afford to be a silent spectator.