Under The Gandhis Of 10 Janpath, Congress Is Risking Its Own Political Decay And Demise 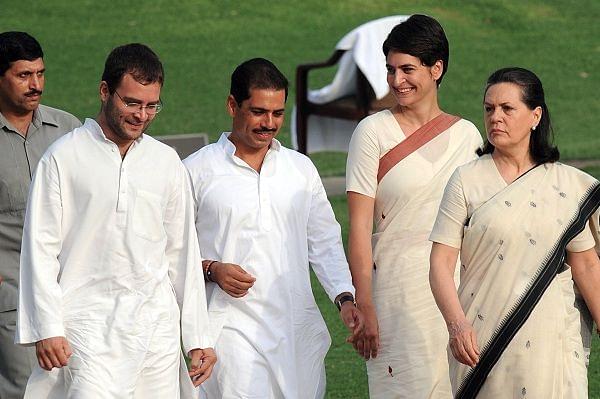 The Congress Working Committee (CWC) yesterday (10 August) chose Sonia Gandhi as the interim president of the party, citing how the circumstances in the Union Territories of Jammu and Kashmir and Ladakh warranted her to take on the leadership of the party once again. However, this was after the party press release praised Rahul Gandhi, former party president, for his ‘exceptional’ leadership and moral compass on Twitter.

Congress, under the leadership of Rahul Gandhi, has lost two national elections now, managing 44 seats in 2014 and 52 in 2019.

The increase of 8 seats in 2019 can largely be attributed to the state of Punjab where Captain Amarinder Singh’s state government, elected in 2017, used the anger bottled over a period of 10-years against the Shiromani Akali Dal (SAD) and the dismal performance and conduct of the Aam Aadmi Party in the state (AAP), to its advantage.

Between these two national elections, the party under Rahul Gandhi lost countless state and local elections, most notable being the one in Uttar Pradesh in 2017 where the alliance of Congress and Samajwadi Party (SP) was routed by the Bharatiya Janata Party (BJP).

The Congress did manage to create some inroads in Gujarat and through a forced coalition in Karnataka, but that was never enough to validate the leadership of the dynast in 10 Janpath.

In December 2018, the Congress tasted some success under Rahul Gandhi as they won Rajasthan, historically a swing state, Chhattisgarh after three terms under the BJP, and Madhya Pradesh after three terms under the BJP with 13 years of stellar leadership under Shivraj Singh Chouhan. The success, as per the party loyalists, was a precursor to what awaited Rahul Gandhi in the national elections of 2019. In hindsight, they couldn’t be more wrong.

Even though Rahul Gandhi chose to step down as the Congress president after the 2019 elections, claiming responsibility and rightfully so for the party’s diminishing fortunes, the other leaders have not been willing to look beyond the Gandhi family when it comes to choosing its next leader.

Even after the 2014 elections and the subsequent routing in various other states, the senior leaders continued to back Rahul Gandhi, one even going on to justify his stake at the presidency by comparing him to a Mughal ruler.

The love of the party for the Gandhi family can be attributed to several reasons.

Firstly, the nepotism in 10 Janpath fuels nepotism elsewhere in the party. While this holds for many other parties, including the BJP, the nepotism in the Congress is without any accountability to the party or the voters. In some areas, however, being a dynast ensures a local connect, but as the voters are now starting to look beyond caste and religion, the Congress is losing this advantage, as evident by the defeat of Rahul Gandhi in Amethi and Jyotiraditya Scindia in Guna.

More importantly, the benefit of being a local dynast is now being shadowed by merit, as the rout of various political dynasties across parties including the Chautalas and Hoodas in Haryana, Yadavs (SP) in Uttar Pradesh, Charan Singh’s son and grandson in Uttar Pradesh, and the HD Deve Gowda clan. Even in Punjab, SAD’s Harsimrat Kaur Badal won a tough election from Bathinda, a constituency the party held since 2004.

Secondly, legacy. Irrespective of the rout of the dynasts in 2019, the Congress, however, is choosing to play the nepotism card at the highest party level, for it ensures that the legacy remains an electoral subject. Each time an election is held, the mention of Rajiv Gandhi, Indira Gandhi, and Jawaharlal Nehru is made to evoke sympathy from the emotional (read gullible) voter.

Legacy: A Problem And A Solution

The legacy factor works for the local workers and leaders as well, especially the ones that have nothing much to show for in terms of performance or promise. Similar to how some celebrity MPs have been riding the Modi wave to win their respective constituencies, leaders, for a few decades now, have used the Nehru-legacy to validate their stake for a seat in the state or national legislative assembly.

For the legacy factor to work, the Congress, as a party, would have to bear with the family, as the legacy is as good as the presence of the family. If (and it’s an impossible if) Rahul or Priyanka Gandhi were to vacate their positions within the party, the local leaders may find it hard to sell themselves to the voters. However, this love for history is now making the party itself history in many places.

Thirdly, the family acts a glue for various factions within the party. As evident by the prevailing internal disagreements in the state units of Rajasthan, Madhya Pradesh, Punjab, and even Karnataka, the family acts as a one-stop-solution for bringing everyone together towards a common cause.

This has worked well for Congress for decades since Indira Gandhi carved out her party. However, going forward, the absence of a Gandhi figure at the helm of affairs may not assure this loyalty or continuity. In the absence of Gandhis, the Congress risks falling apart. Damned if they do, damned if they do not.

Lastly, the family is a cash cow in more than one ways. With their elaborate connections within the Lutyens ecosystem, the family, for a great part of post-Independent India, has managed to set the media narrative. Also, the monetary strength of the family and its ruthless ability to multiply its wealth makes it an indispensable wealth resource to the party.

However, the cash and legacy will serve no purpose in the greater scheme of things if Congress does not find a way to accommodate the Gandhi family without hurting its political prospects. This can be attributed to the following derivations.

Firstly, Rahul Gandhi is not a leader for the masses. For someone who has spent 15-years in active politics with all the possible political, financial, and media backing, Rahul Gandhi has not managed to convince many about the seriousness of his prime ministerial candidature. The macro trends behind the Modi Tsunami hold some critical realisations for the Gandhi family if they are willing to learn.

His NYAY programme, a promise to transfer Rs. 72,000 per year to the poorest 20 per cent of the population was rejected, and in many places, not even understood.

In the Hindi heartland, Rahul Gandhi campaigned across 60 constituencies. While the BJP won 54 of those, Congress won only 1, that of Rae Bareli, held by the party chairperson Sonia Gandhi since 2004. However, even in Rae Bareli, the vote share of the Congress was the lowest since 2004 at 55 per cent.

In Rajasthan, Rahul Gandhi had rallies across 10 constituencies. BJP won in all 10 of them, successfully retaining their seats. In the 25 seats in Rajasthan, Congress scored a golden duck, repeating their performance of 2014.

Thus, the states that were seen as a precursor to the political greatness of Rahul Gandhi served him a stunning defeat. At a national level, Rahul Gandhi is fast becoming a liability to the party’s state and local units.

Secondly, Rahul Gandhi is no match for the duo of Narendra Modi and Amit Shah, as evident by the results of 2019. In 2024, he will be taking up the duo with Shah expected to play a far more active role, especially after his victory in the parliament over Article 370.

If one looks at the constituency victories by the virtue of political rallies in 2019, Modi is light years ahead of Rahul Gandhi in terms of popularity and acceptance. In the Hindi heartland alone, Modi’s strike rate is 79.4 per cent against the 1.66 per cent of Rahul Gandhi. A clear case of one-sided political carnage.

For the sake of space, I won’t even dwell into the lack of seriousness that accompanies the rallies, speeches, and parliamentary conduct of Rahul Gandhi.

Three, Priyanka Gandhi has been rejected, thus denting the prospects of the Gandhi family further. Overall, Congress won six of the 225 seats in the Hindi heartland, a party strike rate of 2.66 per cent. This was an area where Priyanka actively campaigned against Narendra Modi. This sums up the myth of Priyanka Gandhi’s political popularity and measure. The voters did not even consider Congress’ ‘brahmastra’.

Four, the family line is now becoming the party line, and this poses a threat to the political credibility and sustainability of the latter.

As evident by Rahul Gandhi’s alternative stand on Article 370 and Kashmir, recently, and how different it was against that of his party, the question remains if the whims of 10 Janpath are overpowering the needs of the Congress party and if the other regional leaders, workers, and dynasts would be willing to be sacrificial lambs in the power pursuits of the Gandhi family.

Already, in 2019 elections, a good number of Congress MPs had to embrace defeat given that voters were not willing to choose Rahul Gandhi as their PM.

What is working for Rahul Gandhi, right now, even after his fall in Amethi is that all other contenders for the party presidency including the likes of Jyotiraditya Scindia, Milind Deora, Deepender Hooda, Jitin Prasada, and RPN Singh amongst other few lost in the elections of 2019. Thus, even though all these leaders backed the NDA government on Kashmir, the party chose to stick with the viewpoint of Rahul Gandhi.

Although, things may have looked different if the contenders above had the luxury of fighting from two constituencies. Perhaps, some spoons are more silver than the others, to paraphrase Orwell.

India needs the Congress, not as its leading political party for now, but as a credible opposition, one that asks the right questions and sets the right precedent for elections and lawmakers of the future.

However, if the Congress workers using Kashmir or any other issue as a shield, continue to confuse the priorities of 10 Janpath with that of the party, they would have themselves to blame for its decay and consequential demise in 2024.