UP’s Exclusion Politics: Why SP’s Ahead & Why BJP Needs A Kalyan Singh To Win 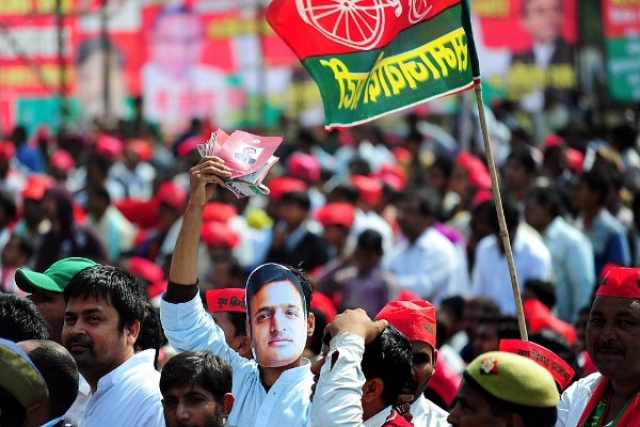 Uttar Pradesh, which is headed for what could be a watershed election early 2017, will provide us with another opportunity to test the expectation that caste and community matter less today than before.

What this means is that the race is wide open between three contenders. The BJP should be kicking itself for allowing its strong lead in the 2014 polls to be frittered away by failing to develop a clear chief ministerial candidate and allowing cow vigilantes to drive a big part of its Dalit vote away.

The poll suggests that the announcement of Sheila Dikshit as the Congress party’s Brahmin face as a chief ministerial candidate may not be working. Brahmins constitute around eight to nine percent of the Uttar Pradesh vote and have usually voted for the BJP. Congress picked Dikshit on 15 July while the poll was conducted between 23 July and 7 August.

If the BJP has to win, it needs to consolidate its upper-caste and non-Yadav OBC vote and project an OBC chief minister. If needed, it should bring Kalyan Singh (aged 85) out of sanyas from his gubernatorial sojourn. Despite his age, Singh may be vital to BJP’s chances, for he is a known non-Yadav OBC leader.

The main thing to understand about Uttar Pradesh is that in a multi-cornered, first-past-the-post system, the winning combination is about the arithmetic of exclusion.

When you need about 30-35 percent of the vote to obtain a majority (the SP, with 30 percent of the vote, is projected to get 141-151 seats, which is well below the half-way mark in a 403-member house), you need three numerically strong groups to win and exclusion of the rest. The SP needs another two to three percent of the vote from other communities to be sure of its majority. The BSP and BJP need around six percent more.

When you need just 30-35 percent to win, who you exclude from your caste-community combination is important, as distributing seats to all communities in rough proportions to their size means the key castes and communities who will get you past 30-35 percent don’t see you as their own party.

For example, the SP, if it needs the Yadav-Muslim vote, must give seats disproportionately to these communities, and very little to the others. The Yadavs and Muslims together form around 35 percent of the electorate, and since no one can get a hundred percent of any community’s vote, the SP needs to co-opt a third tribe to get over the 35 percent hump. This means a maximum of three major communities can get a share in its combination. The rest have to be deliberately excluded – largely the upper castes and many OBCs. This is why thugs are important. They can transcend caste-community divides through sheer muscle power and bring in a seat here or there to complete the picture.

Ditto for the BSP. It has made a pitch for the entire Dalit vote of about 22 percent this year, thanks to BJP’s self-goals with cow politics. This means it needs two or three more communities to cross the 30-32 percent mark; Brahmins and some non-Yadav OBCs are the obvious targets. As long as the SP gets the bulk of the Muslim vote, the BSP has to woo Brahmins and one or two small OBC groups. It has to exclude the Rajputs and many non-Yadav OBCs.

Since it does not seem possible for the BJP to recover its Dalit vote of 2014, it has to focus on the winnable groups. Projecting a tall OBC leader is vital to victory, but given the shortage of time, it may be better to bring back Kalyan Singh, the BJP’s most prominent OBC face from the past.

To put it simply, these are the winning equations based on core communities and key exclusions:

SP: Yadav and Muslim, plus at least one major non-Yadav OBC.

Congress: Its best bet is to play spoiler to the BJP by drawing away some of its Brahmin votes. But if the BJP makes a credible bid for power, this may not happen. The Congress could be scraping the bottom of the UP barrel this time, thanks to its bankrupt politics.

If the BJP were to focus on a win rather than just a long-term vote bank, it has to forgo the Dalit vote (except in pockets) and focus on non-Yadav OBCs, Brahmins and Rajputs. In 2017, the logic of exclusion politics means that the BJP has to forsake not only the Muslim vote but a chunk of the Dalit vote too.

Thus far, it is clear that UP is not going off the beaten track of caste and community arithmetic. Only if all the above calculations go wildly wrong can we see a new beginning in non-identity based politics.

See also: The many returns of Kalyan Singh