Venerable Bakula – The Indian Monk Who Conquered Despotism With Compassion 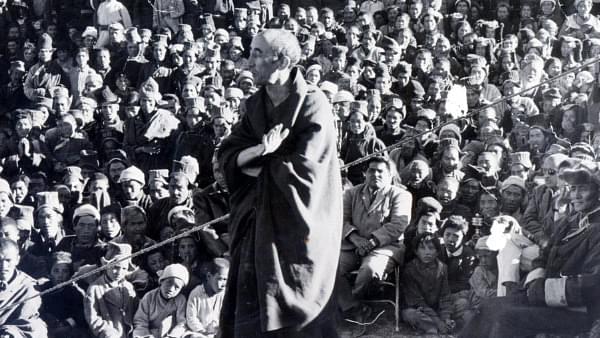 Venerable Bakula addressing the public during his tour to Zanskar Valley in September 1971. (Spituk Monastery website)

There are many theories propounded by historians to explain the decline of Buddhism in India. It is widely argued by many experts, including Dr Babasaheb Ambedkar, that destruction by Turkish invaders of the great universities of India – Nalanda, Vikramashila, Odantapuri, Jagaddala and Vallabhi along with almost all of their teachers and pupils – is one of the most important factors that led to the effacement of Buddhism from India by the end of the twelfth century.

Interestingly, around the same time in history, Buddhism gained state patronage in the kingdom of Mongolia under the Buddhist king Kublai Khan. From this point on, Buddhism flourished in that part of the world. It is documented that in 1921, just before Mongolia fell into the clutches of Bolshevik imperialism, there were more than one lakh monks, including children, who made up about one-third of the male population in Mongolia. The 1930s “Great Purge” by Stalin’s evil forces, led by Khorloogiin Choibalsan, a comprador of the Bolsheviks in Mongolia (who was poisoned by them once their objective of destruction was achieved), permanently shut down about almost all of Mongolia’s over 700 Buddhist monasteries and killed at least 30,000 people, of whom 18,000 were Buddhist monks.

Buddhism in Mongolia met near-destruction without any signs of revival in the short-term future until the arrival into Mongolia of a slender and sparing saint from the far-off land of Ladakh in India – the venerable nineteenth Kushok Bakula Rinpoche.

Bakula was born on the Buddha Purnima in 1917, the same year that the Bolsheviks captured power in Russia. Soon after entering public life in the late 1940s, he emerged as a public intellectual and the greatest leader of the people of Ladakh. At the instance of Jawaharlal Nehru, Bakula decided to espouse the cause of Ladakh by being elected as one of Ladakh’s first two representatives to the Constituent Assembly of Jammu and Kashmir in 1951. Later, he went on to become the deputy minister and was elected unopposed from Ladakh Lok Sabha constituency in 1967. In recognition of his phenomenal contribution, Bakula was awarded Padma Bhushan in 1988.

His contribution to India is incalculable and yet it remains under-documented and under-recognised. In fact, what is even more important is the need for documentation of his contribution to the establishment of world peace in the communist-dominated regions, enabling a smoother transition to democracy. This is primarily for what the international community should ever be indebted to Bakula.

The Soviet Union tried to quash every single religious monument and institution during the Great Purge. However, for some strange reason, at the end of the Second World War, the Soviets adopted a soft pedal on Buddhism and in May 1946, the Union of Soviet Socialist Republics (USSR) enabled the formation of an organisation known as Central Spiritual Board of Buddhists of the USSR (TsDUB) and through this, it funded the revival of Buddhist temples in the Republic of Kalmykia and Buryatia.

With the pioneering efforts of Bakula, an organisation known as Asian Buddhist Conference for Peace (ABCP) was formed in 1969 with its headquarters in Ulaanbaatar, the capital of Mongolia. This perhaps was the first major effort by the Soviets to form an international Buddhist diplomacy initiative, at least within the countries under its influence. Bakula was the co-founder of ABCP and this opportunity for the very first time brought him cloners to the Mongolian Buddhist monks. It is then that Bakula realised the need for a revival of Buddhism in Mongolia. His dream materialised after two decades with his appointment as the Ambassador of India to Mongolia in January 1990. Around the same time, Bakula visited Leningrad (today’s St Petersburg). This was the first ever concrete step towards the revival of Buddhism in Russia. Thanks to these pioneering efforts, today more than half of the two Russian provinces of Kalmykia and Tuva are Buddhists. Buryatian and Zabaykalsky Krai provinces of Russia today have about 19.8 per cent and 14.6 per cent Buddhist population respectively.

In fact, Buddhism can be one of the major areas of diplomatic engagement with Russia. Together with India, Russia could even plan to revitalise the ABCP. And there is no better occasion to do so than during the 100th birth anniversary of Bakula.

It is said that during the most heightened phase of political conflict during the last phase of communist rule, Bakula met with the pro-democracy leadership, tied zangya, the silk cord, with a knot blessed by the Buddhist teachers to protect the followers. Bakula took an oath from the campaigners that despite the serious provocation, they shall not take to violence. This is what ensured the democratic transition in Mongolia.

It is widely acknowledged by almost all heads of states of Mongolia that it is this singlehanded bestowal of love and compassion that ensured Mongolia’s transition to democracy. In 2001, for his contribution to the development of Mongolia-India relations and for the revival of Buddhist culture in Mongolia, the East Asian country conferred on him the ‘Altan Gadas’ Order of Pole Star award, one of the highest civilian awards of Mongolia. Bakula was more of a spiritual leader than a plenipotentiary in the country.

This great initiative of the 1990s holds relevance in the diplomatic domain even to this day. Vietnam and Cambodia, the two Buddhist-majority nations, are under some sort of communist influence even to this day. It would do well for these nations to study the exemplary heeling role played by Bakula in the USSR and, more emphatically, in Mongolia during the early phases of 1990 in ensuring a bloodless transition from despotic rule to democracy.

Dr Ambedkar, in his concluding remarks in the seminal work entitled ‘Buddha or Karl Marx’, has most eruditely said thus:

Man must grow materially as well as spiritually. Society has been aiming to lay a new foundation was summarised by the French Revolution in three words, Fraternity, Liberty and Equality. The French Revolution was welcomed because of this slogan. It failed to produce equality. We welcome the Russian Revolution because it aims to produce equality. But it cannot be too much emphasised that in producing equality society cannot afford to sacrifice fraternity or liberty. Equality will be of no value without fraternity or liberty. It seems that the three can coexist only if one follows the way of the Buddha. Communism can give one but not all.

Recall that Dr Ambedkar made this prophetic statement in 1955, when Soviet dominance and communist influence were at their zenith.

Bakula and Babasaheb – two of India’s greatest sons who walked the Buddha’s path – hold the key for ensuring a bloodless transition from despotic regimes to democratic ones.