‘They Will Send Muslims To Detention Camps’: How Anti-CAA Protest Organisers Incited Violence That Injured 25 Cops 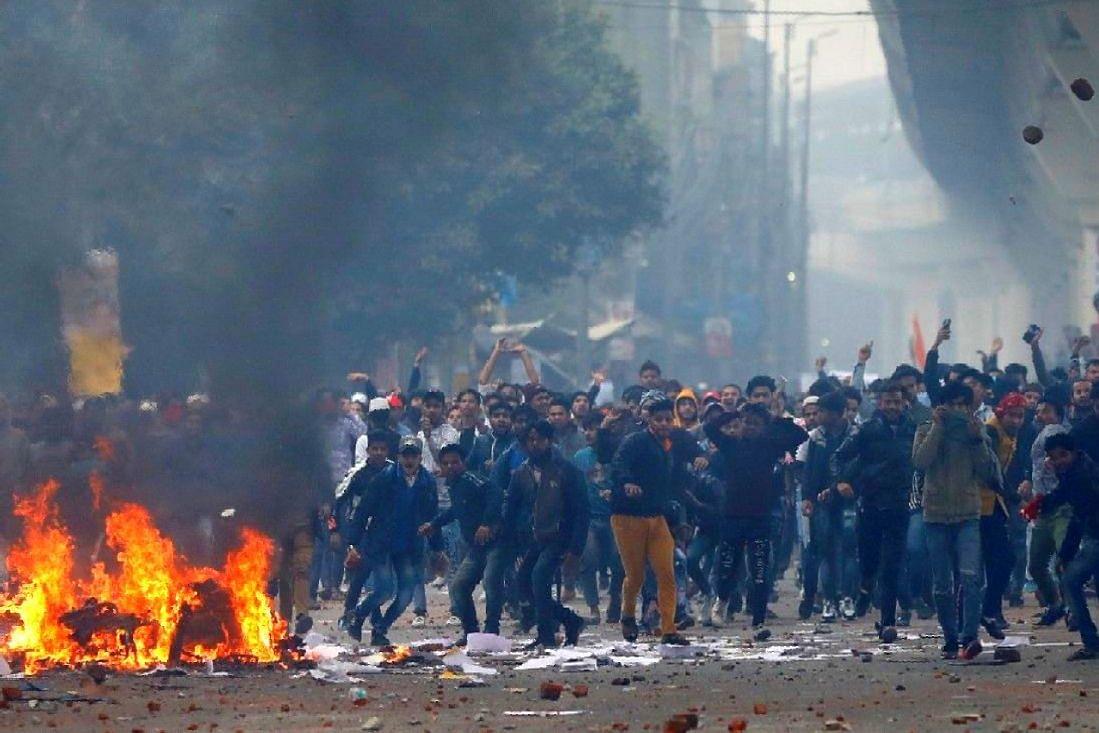 The organisers of anti-CAA protest site at Chand Bagh, adjacent to Wazirabad road (number 59), used it as a springboard to propel riots, says a chargesheet filed by the Delhi Police in a Delhi riots case which pertains to murder of Head Constable Ratan Lal on afternoon of 24 February.

The chargesheet calls the riots ‘handiwork’ of these organisers who incited hundreds of people using hate speeches. The Police investigation also exposes some of the organisers who joined in the rioting themselves once the violence started. They have been caught on the camera red-handed.

It is pertinent to note that this was one of the first instances of violence in the Delhi riots. After the cops were attacked and outnumbered heavily and Muslim rioters started burning properties of Hindus in the area, Hindu mobs entered the arena and the clashes turned into a full fledged communal riot, as attested by Police in another chargesheet.

Saleem Khan, Saleem Malik and Mohd. Jalaluddin were also the organisers of the Anti-CAA protest site in Chand Bagh and have been caught on CCTV camera trying to divert the angle of the cameras and destroying them just before the start of the violence.

Three Muslim eye-witnesses who are residents of Chand Bagh and used to frequent the site of the protest have helped Police unearth the conspiracy and role of the accused.

”A meeting was conducted in Ayaz’s basement before starting the protest in which DS Bindra, Salman Siddiqi, Ayaz, Munna, Salim, Bablu, Hazi Taz Mohammad, Ashraf and others had participated. DS Bindra initiated by saying that we have to start the protest against NRC and that he will setup langar and medical camp. He said that Sikh community was with them and if they don’t raise their voice now, they will suffer same consequences as Sikhs did in 1984,” one of the Muslim eye witnesses told the Police.

“15 days before 23 January, a meeting was called at midnight where two organisers from each protest site in East Delhi were present. It was discussed that sit in protests weren’t delivering results and that we will participate in Bharat Bandh called by Bhim Army Chief Chandrasekhar Azad. Protesters from Seelampur objected to this saying that blocking roads will not achieve anything and it will cause inconvenience to our mothers and sisters who are sitting on roads. They left the meeting as Upasana, Athar and Shadab bruised aside their objections,” the witness further told the Police.

Another Muslim eyewitness told that a secret meeting was held in the evening of 23 February by the organisers after anti-CAA protesters had occupied Jaffrabad metro station. “After that, it was announced from the stage of the protest site that time has come for some action and that the time was ripe to energise the movement because US President Donald Trump is coming and the whole world will have eyes on India. Hence, everyone should bring more and more people to the protest site but take care of yourself. It is possible that we have to confront the Police,” the second eyewitness said.

“DS Bindra used to run langar and he said NRC/CAA was against Muslims. The organisers and speakers all used to say that Muslims would be put in detention camps and tortured. They will do to us what was done to Sikhs in 1984. Boys and girls from JNU and Jamia used to frequent the site and give speeches,” third Muslim eyewitness revealed in his testimony.

Based on testimonies of over 80 eye-witnesses which includes cops who were on duty in the area, local residents (both Muslims and Hindus), CCTV footage and phone call records, Police has made following conclusions in the case:

b) Continuous misinformation about CAA and NRC spread from the protest site in which several students of DU and Jamia were also involved.

c) On night of 23 February, conspirators held a meeting in which strategy for next day was decided.

d) The conspirators were fully aware that violence may ensue and had accordingly directed the protestors to arm themselves.

e) The organisers chose the date and time for march and road blockage keeping in view the visit of Donald Trump for maximum impact.

In the chargesheet, Delhi Police has classified the culprits of the Chand Bagh violence into three categories: conspirators, local instigators and local rioters.

Chargesheet names politicians such as DS Bindra (who is AIMIM leader), members of organisations such as Jamia Coordination Committee, AISA, Pinjra Tod and United Against Hate as main conspirators who presided over the planning, then got in touch with local instigators such as Saleem Khan and Saleem Malik who provided the logistics at the protest site and instigated local Muslims to execute the rioting.

Below the chart from the chargesheet which shows how the conspirators, local organisers were connected to each other.

Police found that all the arrested accused persons had deleted the data pertaining to 23 and 24 February from their mobile phones. “If it is to be believed that the messages shared by them were not instigating and inciting and they intended to stage peaceful protest then what was the need to destroy the related data,” the chargesheet states rhetorically.

The chargesheet talks at length about the planned way in which the rioters attacked the police and that the violence that occurred on Wazirabad road wasn’t spontaneous. Police has released the map which shows the movement of rioters and positions of policemen to back its case about “planned conspiracy”.

As one can see, the rioters had taken over all the streets in the Chand Bagh area which led to Wazirabad road, encircling Police parties from all sides.

Further, the Police say that the rioters used a well thought out strategy of keeping women and children in front so that they can’t take any coercive action.

“This concept was also provided by the conspirators taking a cue from the various speeches delivered by Sahrjeel Imam in different states of the Country, wherein, he introduced the concept that police is afraid of females/ladies. So, bring Muslim females forward at every protest site and police would not be able to take any coercive step (sic),” the chargesheet says.

According to the Police, this concept was deployed to lynch Head Constable Ratan Lal and other cops who were on law and order duty near the protest site. These cops were encircled from three sides by women with their backs against a 5-ft tall road divider. “Some were lucky as they were able to jump off the 05 feet high divider but some got stuck and were dreadfully lynched,” the chargesheet reads.

The situation of cops can be understood from the screen grab below which is taken from a viral video that showed how cops were lynched by the mob that day.

“Within minutes of attacking the police party HC Ratan Lal (in police uniform) was shot dead. The police party was brutally assaulted and when the injured police men including a DCP, Sh. Amit Sharma went to Mohan Nursing Home for medical care the mob chased them and vandalised the nursing home. The violent mob in communal frenzy rampantly started selectively targeted the properties of Hindu community,” it adds.

This chargesheet by the Police shows that the first incident of violence which sparked off Delhi riots on 24 February was actually instigated by the organisers of the anti-CAA protest site in Chand Bagh.