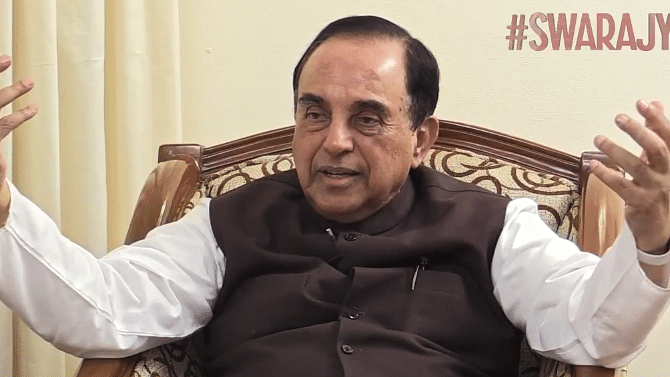 Dr Subramanian Swamy in an exclusive interview with Swarajya.

There are two major shortfalls of demonetisation:

1) The move should’ve come with a palliative: the complete and total abolition of the income tax. The incentive to evade taxes is the fundamental reason for the augmentation of the flow of black money in our country.

2) There should’ve been a well-thought-out plan of how to make up for the loss of cash. There should’ve been a huge surplus of Rs 100 notes or Rs 200 notes and kept ready. Now, these are the parts of what is called a contingency plan. I think the finance ministry was under an illusion, thinking this will never happen, and I think Mr Jaitley also thought that Prime Minister would never act alone. The finance ministry was taking it very casually.

I also think some of the things they did was without thinking; for eg, the Rs 2,000 note. Why was it necessary to change the size of the note? Had they not changed the size, there wouldn’t have been any need to recalibrate the ATMs. We should’ve also decentralised the cash receipts and delivery. We have such large PSUs. They could have been used for cash deposits and withdrawal.

3) After announcing demonetisation, I had said let people with unaccounted money deposit the old notes in their own account, no questions asked. Of this, government would take away 25 per cent and give back 25 per cent in new notes so that cash augmentation can take place, rest 50 per cent in fixed deposits for five years at 2 per cent interest rates.

Complaints of the general public. They were being harassed. When I came back from America, we were getting our income tax deducted at source (at IIT Delhi), but the income tax guy would send a notice saying please appear before me in Aaykar Bhavan and ask questions. He would ultimately say, I am going on a vacation with my family to Kashmir, please fund it. I am talking about 1970-71.

The future of work and reaping the demographic dividend

Our problem is, dividend is not a dividend yet. It’s a potential dividend, but you have to somehow educate the population. We haven’t given the kind of priority we should’ve given to education. We have to change the mindset. The Indian mindset is risk aversion. We have to educate them to take risks so they can go into various fields, where they may fail but must not give up. These are mindset changes that have to be brought about before demographic dividend of the population can become a dividend.

First of all, the most important part of black money in the country is income tax. Knock it off. Abolish all these registration taxes on real estate. What is the need for paying taxes, having stamp paper and filing in the details? Because of income tax, they understate the value of the property.

The bigger problem is of $1 trillion being abroad because in 70 countries you have secret banking. In 2005, the UN had passed a resolution saying that if a country passes a legislation stating that their nationals’ accounts in these countries are nationalised, then the UN will help them acquire that bank account and the money in it. Now, the Egyptians did it. Mubarak and Gaddafi both got it.

There are other methods also. We have a mutual assistance pact with Switzerland. If you can say Sonia Gandhi has an account in Sarasin Bank, which has its headquarters in Geneva or that Rahul Gandhi has an account in Pictet Bank in Zurich - and they do - and I have given it in writing to the finance minister, then you can tell the Swiss, please help us get it. The problem is that the finance minister doesn’t want to pursue the matter. I have also told the ED, but they have also been stopped from going forward.

I have told these methods to the Prime Minister also. He preferred the UN one. So I sent him in writing, but it’s still not being done.

On learning from China

Let me first tell you what the Chinese model is. They import semi-processed goods from Taiwan, Japan, Singapore, the Philippines and then they add value to it. They then put a stamp on it: Made in China. Therefore, what happens is, the Chinese have a deficit trade with East Asia because they are only importing but have a huge surplus with Europe and America. There is no indigenous manufacturing capacity as of now.

If you want a lesson to learn, it is this: If the Chinese can do it, we can do it better. But the problem is, all these companies say we want to come to India, but you have lousy infrastructure and a corrupt system. It takes one week to turn around a ship in India while it takes only a few hours in Singapore. The day we have efficient transport system, national and state highways, they will come to us, and we will get the boom.

Our mistake was to adopt the Soviet model. The second mistake was to keep interest rates high. And then we have all these labour laws, so manufacturing decided to go elsewhere.

From economics to politics - why he took the plunge

I first started teaching at Harvard. I became an associate professor and was due for becoming a full professor. So, the choice was whether I should settle down permanently or go back. I wanted to go back. At that time, DSE (Delhi School of Economics) invited me to teach. I taught one summer, I liked it. I told them I will come back and accept the chair for China. But by the time I came back, Congress split and Indira Gandhi had to depend on communists. Mr Amartya Sen immediately turned colour, because he is an opportunist of the first order, and after inviting me to become a professor, he coolly buzzed off. So I went to IIT Delhi and became a professor there and taught for three years. Suddenly, Mrs Gandhi picked up my book on alternative economic planning and read out and said, this dangerous man, coming from America, polluting the minds of student, how is he a professor? Next day, I was sacked. I fought in courts and 22 years later, I won, but by then I was a minister.

I joined politics because I couldn’t get any job in India. I never intended to go into politics. I was a mathematical economist and already famous in China. I had co-authored a paper with Paul Samuelson on index numbers, which became a classic in the field. In an article, Samuelson wrote that I have five students who will get a Nobel Prize in the next 10 years. And four got it. I am the only one who didn’t get it.

In Hindu philosophy, we don’t have a prophet. There is no one to command us. So, the most decentralised religion is Hinduism, natural for market economics. The only addition that Hinduism brings, which make us a more happy people than the Americans, is that we don’t believe in one-dimensional materialism. We believe that spiritual values are important. So we venerate people who sacrifice but are knowledgeable. This veneration of knowledge and sacrifice is what differentiates us from the Western model of market economy driven by profit.

I don’t think Trump’s win has got anything to do with protectionism. Trump was the first person to recognise that political correctness is hypocrisy and the public hated it and that most of the public wasn’t going to vote. When he began speaking their language in a crude way, may be the sophisticated ones were not happy, but the masses decided to vote. Since they didn’t participate in polls, the polls got it wrong. I supported Trump; in fact, I won a bet with Prime Minister’s principal secretary who said the whole country thinks Hillary is going to win.

Same thing with Brexit. The masses were fed up. They wanted their country back, and they said, we don’t want this internationalism. It has nothing to do with protectionism.

What about Modi? Of course, his win was a combination of first, his own personality; second, the anti-corruption fight which I was responsible for; and the third, Hindutva, which the RSS was responsible for, because for years we were dividing the Hindu vote and uniting the minority vote. We decided we are not going to allow the Hindu vote to be divided to the extent we can, and we won.

It is too early to judge. We are moving on triple talaq and uniform civil code. I am working on Ram temple. The change around that which has taken place hasn’t happened in 70 years. We still got two-and-a-half years. I agree Mr Vajpayee didn’t, and that’s why he lost. I told Modi also that don’t think development gives you victory. It is a necessary condition but not a sufficient one. For a sufficient condition, you have to bring a sentiment. Maybe fight with Pakistan: that’s a sentiment. Hindutva is a sentiment - that we are 80 per cent but treated like 5 per cent. That kind of sentiment is important. Two months ago, no one was talking about triple talaq or uniform civil code. These have been the demands of the Hindus: Ram temple, UCC, Article 370, which, by the way, mark my words, will go before 2019. Ram temple will be built next year. I’m telling you. I will win the case in court. We have strengthened the ban on cow slaughter. We have fixed the subsidies on beef export. So, a lot of things have been done. We have done a lot of foolish things, but that doesn’t mean we can’t fix them.

The younger generation is national-minded. We have made a big mistake in not being taught Hindi. We can’t move around in the way people from other states are able to do. They want to be part of India. I am not saying we should ignore the Tamil identity, but it is subservient to national interest. In case of a clash of interest, the national interest will prevail. We have to tell them that you bond with us. We have to give them the confidence that we will stand with you. But take a national stand, learn Hindi, identify with the national interest.

On the rumours of being offered the governorship of Tamil Nadu

I have turned down the governorship of Maharashtra and Uttar Pradesh. These are all informal soundings. I have also turned down the vice-chancellorship of JNU and the presidentship of BRICS Bank. I am not going to take any of these ceremonial posts, where all you do is sit and eat breakfast, lunch and dinner.

Here’s the full video of the conversation with Dr Swamy.