‘We Burnt All Her Photos’: Dalit Woman Lynched For ‘Disrespecting’ Sikh Holy Book Shunned Even By Own Family 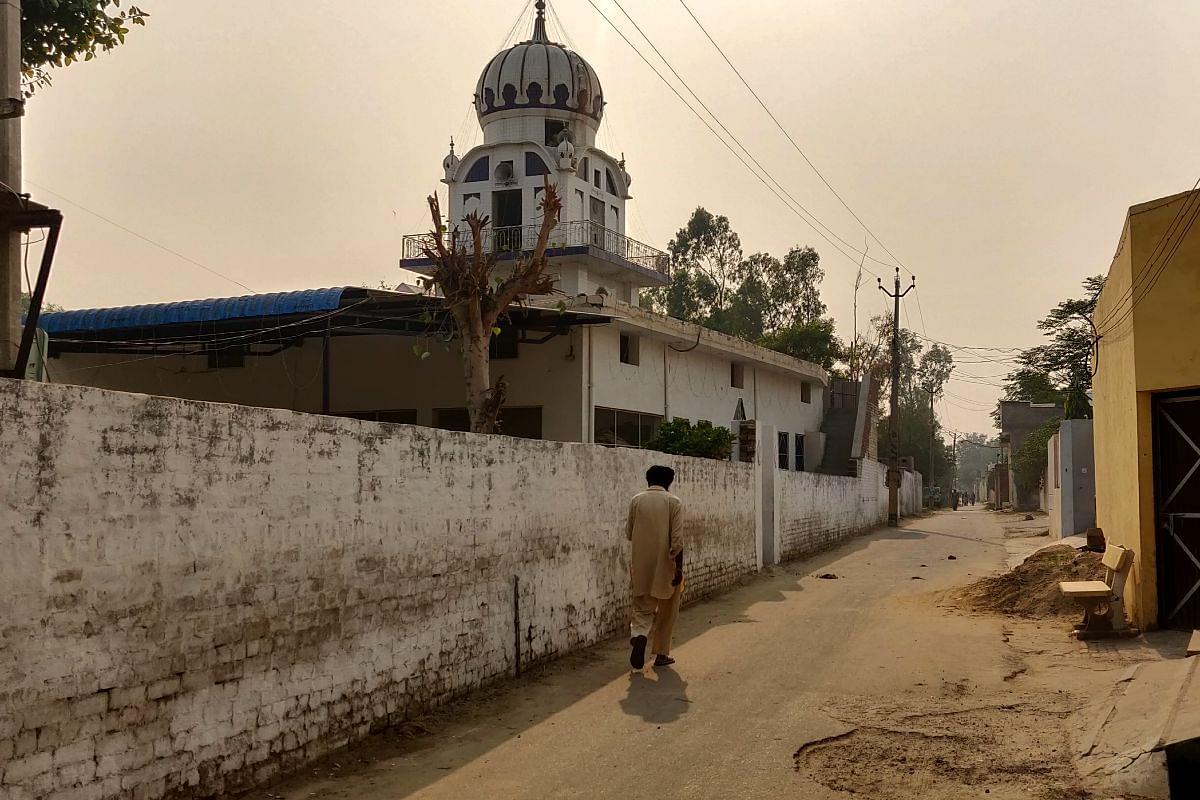 A view of the Ramdasia gurudwara in village Ghawaddi, Ludhiana

When Lakhbir Singh was dismembered and lynched by a group of Nihang Sikhs at the Singhu border farmer protest site last month, few realised that it was only the latest in a series of killings over ‘disrespect’ to Sikh religious texts.

Since 2016, at least four other people have been extra-judiciously killed by Sikh extremists for “sacrilege” of holy texts in Punjab. These include two women.

The first victim of these killings was 48-year-old Balwinder Kaur from Ludhiana. Accused of tearing some pages of Guru Granth Sahib – the central text of Sikhism – Balwinder was shot dead by two Sikh youths in 2016.

They owned up to the killing in front of the media.

“We don’t regret killing the woman. It was to avenge the desecration of Guru Granth Sahib,” one of the accused, Gurpreet Singh, was quoted in the media.

Gurpreet and Nihal Singh made the statement outside a court where they surrendered a few days after shooting Balwinder dead.

A visit to Balwinder’s village this week – Ghawaddi in Ludhiana district of Punjab – revealed that her own family shunned her after the sacrilege incident.

She was not allowed to step into the village again. Her body was denied cremation space.

Her son Ranjodh Singh told this correspondent that after the incident, he burnt all photographs of his mother.

The house where Balwinder lived after marriage and raised her children, has no trace left of her at all.

Ranjodh, 32, recalls the night when his mother revealed to him the sacrilege incident. He doesn’t remember the date, but it was in October 2015.

Ranjodh sings at Jagrata and Mata ki chowki for a living. That night, he returned from work around 3am. Two hours later, Balwinder woke him up and told him that “someone” had torn pages from a copy of Guru Granth Sahib kept at the local Ramdasia gurudwara and strewn them on the floor.

“I was enraged. I told her that we must raise the issue in the village,” he told Swarajya on 6 November at his house in Ghawaddi.

Ranjodh belongs to Chamar caste, which is a scheduled caste. In Punjab, converts to Sikhism from Chamar caste are known as Ramdasia or Ravidasia.

The village, with about 1200-1500 houses, has four gurudwaras. One is called “kisaana da” (of farmers, referring to land-owning Jatts who make up half the population of Ghawaddi). Others are called “Mazhabi da” (of Valmikis, also a scheduled caste) and “Ramdasia da” (of Chamar caste). A fourth gurudwara is named after a saint called Baba Shaheed.

Balwinder had been working as a sewadar (sewa volunteer) at the Ramdasia gurudwara for about eight years. She had taken up the work after death of her husband. She was tasked with sweeping and mopping the gurudwara premises besides other cleanliness-related work.

Ranjodh says when his mother told her about the torn pages, he repeatedly asked her if she knew who was the culprit. “She kept saying she did not. She also repeatedly denied any role,” he says.

Nevertheless, as the matter picked up and police arrived in the village, they arrested Balwinder, Ranjodh as well as the Granthi of the gurudwara, Sikander Singh.

They were kept in the lock-up for a week. Asked if their names appeared in the first information report (FIR), Ranjodh says they did not and police told him that they were arresting them for their own safety.

Nihangs had started streaming in the village from Ludhiana city.

Nihangs form an order of the Sikh community, characterised by blue robes and large, decorated turbans, seen carrying arms such as swords and spears. This “warrior” sect traces its history to the creation of the Khalsa by Guru Gobind Singh in 1699.

Police often struggle to control Nihangs and make them follow law and order.

In the recent Singhu border case where Nihangs severed the hand and foot of Lakhbir Singh, which led to his death, their leaders told the media that four of their men had surrendered to the police and if the police dared to make more arrests, they would forcibly get even those four released.

The leaders also issued statements that the sect would continue to lynch people accused of sacrilege of Sikh holy texts.

In the Ghawaddi case, preliminary police investigation pointed the needle of suspicion at Balwinder.

Ranjodh says she did not protest much either, making even her family suspect she was indeed the culprit.

Asked about her possible motive behind the act, Ranjodh says “it’s between her and Rabb (God)”. He refuses to say anything more.

News reports of that year say that Balwinder kept changing her statement to the police. At one point, she said a local Congress leader promised her money in lieu of carrying out the sacrilege.

Police told the media that she was a long-time Shiromani Akali Dal member, but the party denied it.

A Hindustan Times report said that Balwinder carried out the act as a “conspiracy” to get the Granthi sacked. The new Granthi had replaced her elder son Ranjeet Singh. Balwinder was unhappy with the change as earnings from the gurudwara had dropped. She had hoped that the blame would fall on the Granthi and he would be shown the door.

Investigation revealed that when she disclosed the sacrilege incident to the Granthi around 4am, he asked her to stay mum about it.

Asked if villagers, particularly the Jatts, harassed him or his family for what his mother was accused of, Ranjodh says, “If they did, would I be still living in this village?”

Ranjodh says that the first thing he did after returning home from jail was to collect all pictures and belongings of her mother and burn them. “She had ceased to mean anything to me,” he says.

Ranjodh says it was his mother who had initiated her into the Sikh tradition. “We were Sikhs alright, but had not been baptised. I used to be clean-shaven, but soon after my father died, my mother took me to a gurudwara in Ludhiana for Amrit sanskar,” he says.

After the ceremony, he gave up meat, alcohol and tobacco and began to sport a beard – traditions he maintains till date.

“I am thankful to her for this,” he says. “But given what she did to Guru Granth Sahib, she lost all respect in my eyes.”

Sikhs consider Adi Granth, a collection of nearly 6,000 hymns of the Sikh Gurus, as a living Guru and worship it like a deity. Thus the name, Guru Granth Sahib.

The book is the central object of worship of the Sikhs. As per an edict issued by the Akal Takht in 1998, the rights of printing the book are reserved with the Shiromani Gurdwara Parbandhak Committee (SGPC). Any other institution seeking to publish the text must take permission from the SGPC.

When Balwinder was released on bail in December 2015, the family made her stay with relatives in Ludhiana. She had been ex-communicated from Ghawaddi. Ranjodh says she did visit once or twice, but stealthily in the night.

She was shot dead in July 2016. The key accused, Gurpreet Singh Jagowal, was found to be a member of a Malerkotla-based organisation called Muslim-Sikh Front of Punjab.

Police investigation revealed that Gurpreet and co-accused Nihal had lured Balwinder to meet them outside Gurudwara Manji Sahib in Alamgir by promising her that they would take her to the Golden Temple for an apology at the Akal Takht so she can be pronounced “clean” thereafter.

The sarpanch of Ghawaddi refused her family’s request to let her be cremated in her own village. She was consigned to flames at a cremation ground near Arora Cinema in Ludhiana. Even that was opposed by locals and had to be done under tight police security.

No one from her village, other than some family members, attended the funeral.

Ranjodh is indifferent to the murder of her mother. He even calls it “inevitable”.

“This had to end this way. There is no other punishment for sacrilege of our Guru other than death,” he says.

Asked if he is justifying a murder, Ranjodh becomes more cautious. “Well, ideally she should have been hanged by the government.”

“But God perhaps wanted it this way,” he adds.

Elsewhere in village, residents decline to comment on the case calling it “an old matter”. A family living near Ranjodh’s house, also from Ravidasia community, says they do not know about the case at all.

A group of elderly residents soaking in the sun helped with directions to the Ramdasia colony, but politely declined to either share any detail of the case or get clicked.

Ranjodh declined to get any picture of him or his house clicked, citing risk to his and his children’s lives.